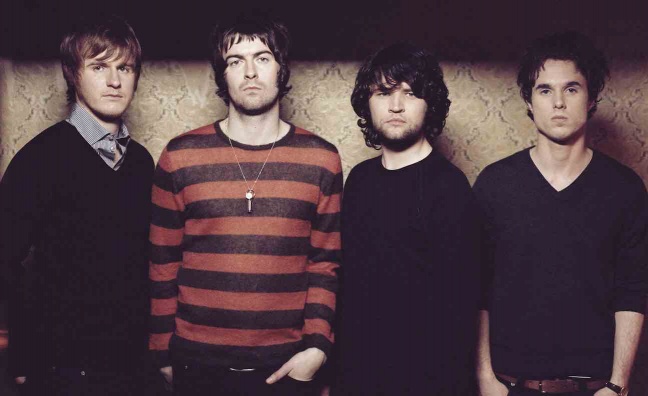 The Courteeners have broken a chart record with their 2008 debut album St Jude, which has gone to No.1 for the first time.

A 15th anniversary edition of St Jude (Polydor/UMR) debuted at the summit with sales of 19,022, including 18,547 physical copies (more than 97% of the total), according to the Official Charts Company. It topped the vinyl chart with sales of 10,197 on that format.

The new edition, which includes remastered tracks, rarities and previously unreleased material, reached the summit 14 years and nine months after the original release. It is now officially the album with the longest time between release and charting at No.1. The LP originally debuted and peaked at No.4. in April 2008.

Conrad Murray, of SJM Management, said: “It’s a really special achievement, 15 years after the debut album reached No.4 in the charts. This reflects the love for the band and helps cement their reputation as one of the biggest groups in the UK. Polydor and UMR played a big part in bringing everything together, alongside the band.

“It was great for myself and Dave Salmon to team back up with Ali Tant and Jodie Cammidge, who played a massive part in breaking the band back in 2008, as well as everyone at Polydor – with special thanks to Ben Mortimer – and Carolyn [Cooper, A&R manager] and Chas [Chandler, head of A&R development] at UMR.”

St Jude is now the band’s first No.1, alongside seven other Top 10 albums, including a No.2 peak for 2020’s More Again Forever. The band actually revisited and re-recorded songs on St Jude for the 2018 Ignition Records release of St Jude Re:wired, which peaked at No.5 and has sales to date of 79,960.

Ali Tant, head of marketing at Polydor, said: “The roots of this go back a while. I’ve always admired what SJM and Courteeners have built. There are super fans and then there are Courteeners fans and very very few artists have a fanbase as diehard as theirs.

“At the start of 2022 Conrad, Dave Salmon and myself hatched a plan to reissue St Jude adopting a frontline marketing approach to the campaign with the expertise of what the catalogue team bring. I took the idea about St Jude to Ben Mortimer and Jodie Cammidge, who both gave their blessing. The stars aligned when Hannah [Neaves] and Azi [Eftekhari] came in to run UMR, and within minutes of their roles being announced I had contacted them about Courteeners.

“With the collaboration between SJM, Polydor and UMR the best of all parties came into play. A combination of live activations, D2C plays, incredible support from indies and HMV and a targeted OOH campaign in both Manchester and London drove a huge release week number and sees Courteeners finally achieve a long overdue first No.1 album.”

Courteeners are only the third band in Official Chart history to chart a reissued album at No.1. They join The Rolling Stones (Goats Head Soup, Exile On Main St.) and The Beatles (Abbey Road, Sgt Pepper’s Lonely Hearts Club Band) as the only groups to have achieved the feat.

St Jude is the first catalogue No.1 based on sales in 2023. Three catalogue-based titles reached the summit last year, including Michael Buble’s Christmas, Steps’ Platinum Collection and Robbie Williams’ XXV (although this was a newly-orchestrated hits collection).

The catalogue campaign includes 4K versions of original videos of the singles from St Jude. Last year, the album’s biggest single, Not Nineteen Forever, passed a million chart sales (it now stands at 1,042,632) thanks to a streaming tally of almost 97 million in the UK.

Carolyn Cooper, A&R manager at Universal Music Recordings, said: “Back in 2018, Chas [Chandler] and I worked with SJM on a limited pressing of St Jude on red vinyl for Record Store Day and saw this sell out immediately, as one of the most successful Universal RSD titles that year. We’ve always believed in the opportunities presented by this record and the Courteeners’ extraordinary fanbase and it’s been a delight to work on the project in tandem with SJM and Polydor, giving it the care and attention it deserves.

“Unearthing the bonus material from the archives and working with original mastering engineer John Davis to revisit these tracks, as well as reimagining and adding to the already incredible artwork, has been extremely satisfying. It has been wonderful to see the reaction as both fans and indie stores receive their product this week. Clearly, St Jude is a classic album that still means so much to so many - and long may that continue.”

Courteeners will mark St Jude’s 15th anniversary with a massive hometown headline show at 50,000-capacity Heaton Park on June 9, where they will perform the album in full alongside other hits. It will be the band’s third headline show at Heaton Park.

SJM said the band have sold over 760,000 tickets in the UK over the past decade.