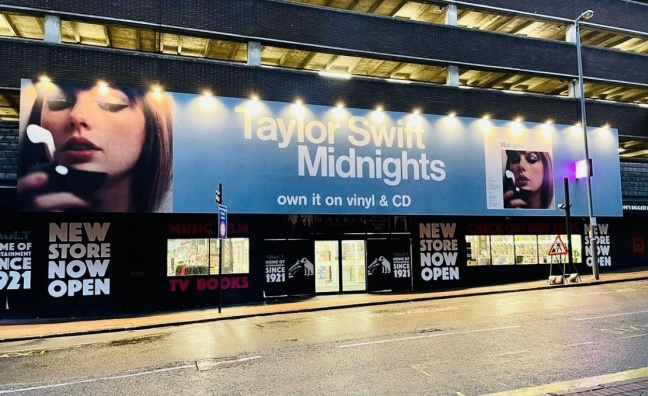 The preliminary figures - which will be confirmed in March - are different to the BPI’s in that they track the retail sales revenue tracked by the Official Charts Company rather than units.

ERA CEO Kim Bayley said: “We are approaching a watershed. Thanks to the investment and ingenuity of streaming services on the one hand and to the physical retailers who have driven the vinyl revival on the other, music is within sight of exceeding £2bn in retail sales value for the first time in more than two decades. Music has to be great to win people’s attention, but it’s the buying and consumption experience which ultimately persuades people to put their hands in their pockets.”

Physical music was boosted by big Q4 releases including Taylor Swift’s Midnights (EMI) and Arctic Monkeys’ The Car, as well as No.1s including Sam Ryder’s There’s Nothing But Space, Man! and festive releases from Cliff Richard and Andrea Bocelli.

“Taylor Swift and Arctic Monkeys were always going to be huge at retail, but it’s fair to say few expected them to be quite so big,” ERA CEO Kim Bayley told Music Week. “It’s a reminder that, in physical at least, great records can change everything.”

The main driver of growth was again streaming from major services such as Spotify, YouTube, Amazon and Apple Music. Subscription streaming revenues grew 5% year-on-year to £1.66 billion. According to the BPI’s volume figures, audio streams increased 8.2% to 159 billion streams.

Revenue is certainly up, but the challenge in 2022 was more about profitability

Physical sales fell slightly by 3.8% to £280.4m, but ERA said the figures were levelling out as the higher-priced vinyl format showed sustained growth as CD slipped. Music Week reported on the CD slump at Christmas. The BPI reported a 13.1% decline in physical album units, though for CD alone the unit sales decline was 19.3%.

According to ERA, vinyl album sales grew 11% to £150.5m, while CD album sales fell 17.4% to £124m, the first time vinyl outsold CD by value since 1987. The change had been predicted last year by ERA, but the scale of the gap in the first year they have swapped places is significant.

While ERA’s Kim Bayley welcomed the results for vinyl, she stressed that retailers were subject to the prevailing economic pressures.

“Revenue is certainly up, but the challenge in 2022 was more about profitability,” she told Music Week. “After years when securing top-line growth was the challenge, with soaring energy costs and inflationary pressure on wages, the issue now [for retailers] is turning revenue into profits.”

The long-running issue with vinyl has been with the production capacity and supply, though there have been some signs that the situation has improved.

“There are still manufacturing delays with labels having to press many months up front,” said Bayley. “Whilst it could clearly be better, both labels and retail are learning to manage these constraints and the market is still growing. The addition of any new capacity should be welcomed.” 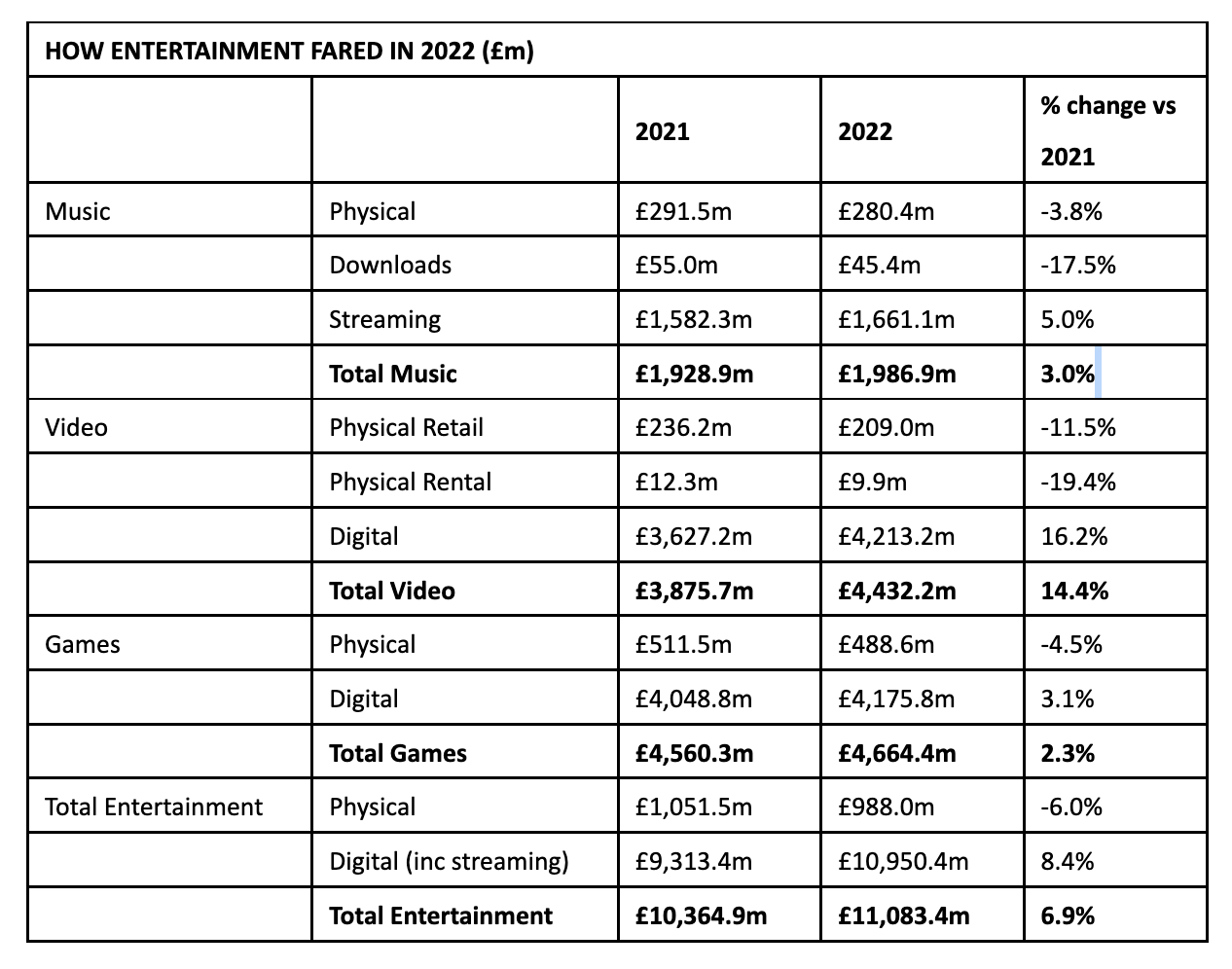 In 2022, the vinyl market also showed a shift towards current releases over catalogue with eight out of the Top 10 sellers of 2022 - including LPs from Harry Styles, Taylor Swift, Liam Gallagher, Arctic Monkeys, Wet Leg, Fontaines DC, The 1975 and Muse - being released in the past 12 months.

“There’s always something which can be improved, but on the whole the relationship between retailers and their record company suppliers is pretty healthy right now,” said Bayley. “Retailers may have discovered and fostered the vinyl revival, but labels have responded well to the challenge and vinyl now forms part of almost every album's marketing plan.”

The ERA CEO also praised the support of the industry for key initiatives in the retail calendar.

“If you want concrete examples of the constructive way record companies and retailers can now work together, you need look no further than Record Store Day and National Album Day,” she added. “We can all be proud of what has been achieved.”

Despite pandemic, political uncertainty and recession, entertainment has continued to soar

The rise in vinyl sales, now in its 15th year, may be partly explained by the loyalty of fans when presented with multiple editions by artists and their labels. But prices have been increasing, with new releases often above £30, which means a considerable outlay for an artist’s most committed followers.

“It’s a matter of balance,” said Bayley. “Clearly exclusivity is a successful sales driver, but if you push it too far you run the risk of resistance from fans. Achieving multiple sales of the same record to a relatively small number of fans clearly works from a revenue perspective, but we should be wary of going to the same well too many times.

“On a practical level, the industry needs to ensure product is clearly labelled with regards to variant and colour, etc, and that fans are aware of what formats are being issued when. We still see too many cases of an indie offering a red vinyl only to find out a few days later that the D2C site is offering multiple different variants which affects demand.”

Despite the growth in vinyl in 2022 in revenue terms, there are concerns about the economic climate and its impact on consumer behaviour in the year ahead. Furthermore, the double-digit revenue boost for the format was helped by inflation last year more than volume - the BPI reported just a 2.9% increase in unit sales last year - and there is unlikely to be the same upwards pressure on prices in 2023.

“Conditions are challenging and unpredictable so I would not like to predict continuing growth in 2023, but retailers will certainly give it their best shot,” said Bayley.

Games continue to represent the largest sector of sales, accounting for 42.1% of the total, with video within touching distance on 40% and music on 17.9%. Video had another strong year with revenues up 14.4% to £4.432bn driven mainly by subscription streaming from the likes of Amazon Prime, Netflix, Disney+ and Now TV.

ERA chairman Ben Drury said: “Despite pandemic, political uncertainty and recession, entertainment has continued to soar. Growth of nearly 40% since 2019 is extraordinary. Few would have believed we would retain the huge bounce in revenues seen when the Covid lockdown kept people at home, but these numbers show that even amid recession, people are determined to maintain their spending on entertainment. This is a huge vote of confidence in the attractiveness of our members’ offer whether they be small independent record shops or global streaming platforms.” 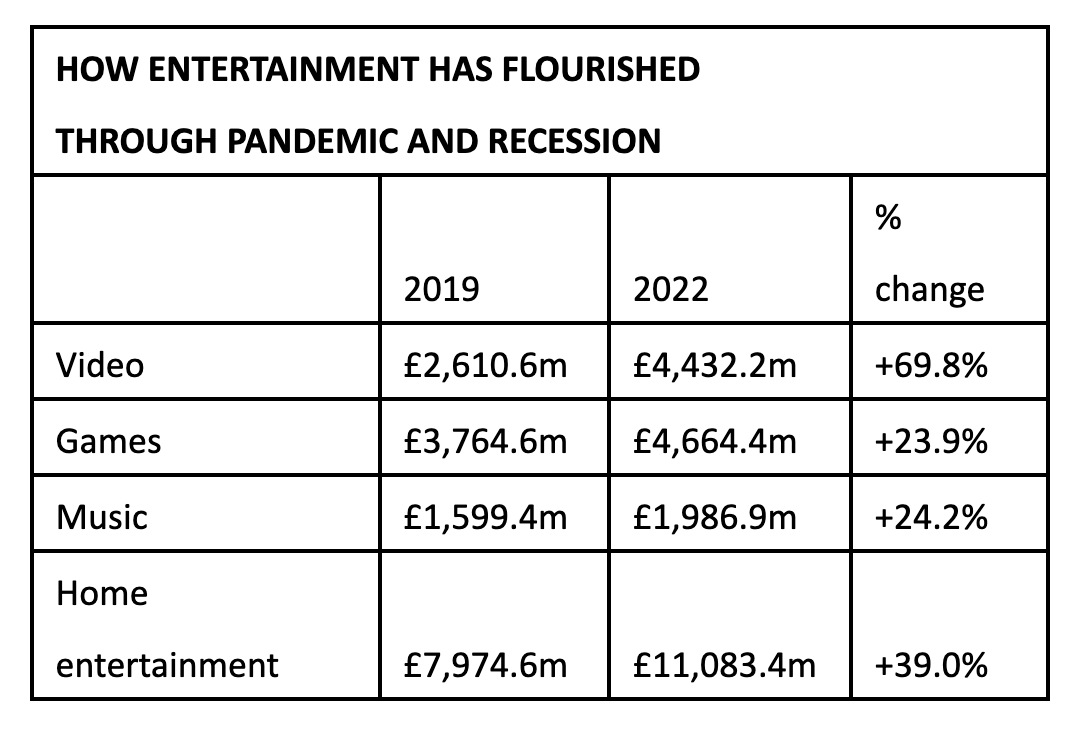