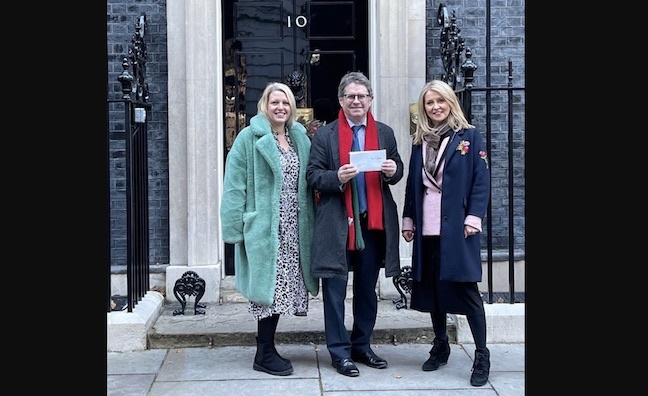 MPs will debate a Private Member’s Bill from Kevin Brennan on Friday (December 3) that proposes far-reaching reforms to the music industry.

Following the DCMS Committee streaming investigation, in which Brennan was one of the most vocal MPs, he has now introduced a Bill that would give new rights to artists in the streaming era.

Brennan, who's also a songwriter as well as a Labour MP, has won support from politicians across the political spectrum, as well as the Musicians’ Union (of which he is a member), the Ivors Academy and the Broken Record campaign. Today (December 2) he went to 10 Downing Street (pictured) with MU deputy general secretary Naomi Pohl and Esther McVey MP to deliver a cross-party letter to PM Boris Johnson.

Labels are less happy about his proposals, which include the right to revoke contracts after 20 years and a change to the royalties model for streaming. Both AIM and the BPI have warned that such reforms could have unintended consequences that could damage the UK music industry.

BPI chief executive Geoff Taylor has told Music Week that the proposals, if enacted, could hurt UK talent and labels by diverting A&R budgets to other territories where the legal framework would provide more certainty.

“We are very concerned by proposals that are going to be debated for legislation that would impose new costs on UK labels,” he said. “It would reduce the amount of money that they have to invest in new signings and create huge uncertainty around investment. because if you don't know how long your contracts are going to last for, you don't know whether or not the Copyright Tribunal may come along and rewrite them at some point.

“It becomes very difficult to invest and know how much you can afford to pay as an advance, or what kind of deal to do with all that uncertainty. So we are very concerned that the proposals that have been advanced would make the UK unattractive, and then that creates two risks. The first risk is that international companies choose to put their A&R money elsewhere. They can just as easily put a pound into Colombia or into an Asian market as they can into the UK and develop repertoire there. The success of K-pop and J-pop shows that those markets can be real repertoire sources internationally.

“The second risk is that the UK becomes an unattractive place to sign talent and those deals are lost to labels overseas, or even that international companies sign UK talent overseas. We need to make sure that the UK remains a really attractive country in which to develop new artists, otherwise the long-term health of the industry here will be at risk.”

The proposals include the introduction of equitable remuneration for streaming revenues to make the revenue split between artists and labels similar to broadcast income - a concept that was well covered during the committee hearings.

Brennan also wants to enshrine in law the right to contract revocation after 20 years, including retrospectively even if a deal was agreed on terms for life of copyright (70 years). There would also be a right to contract adjustment on top of the current ad hoc arrangements for renegotiation.

During the DCMS Committee hearings, life-of-copyright deals were defended by labels.

AIM CEO Paul Pacifico has written an open letter to parliamentarians ahead of the debate which is available here.