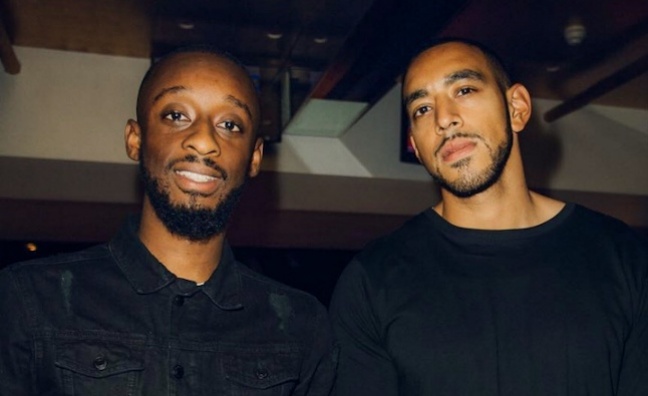 The A&R/management executives have risen through the ranks of the global entertainment company in recent years. They both report directly into CEO Sarah Stennett.

Jesse Dickson and Jay Grey (pictured, L-R) take on their new roles as FAE prepares for a new era for Rita Ora, one of the company’s most successful artists over the last decade. The multi-billion streaming artist has partnered with BMG for her next album.

Grey’s focus in his new role will be to continue building FAE’s publishing, records and management roster of talent. Following his promotion, Dickson will aim to drive further success for FAE's burgeoning roster.

Jay Grey joined FAE in 2016 as an intern before moving into an A&R management role, which saw him work across the company’s management, records and publishing roster, overseeing signings, release campaigns and talent management.

During his time at FAE, Grey has worked with producers and writers whose credits include releases from Anne-Marie, Ashanti, BTS, Charli XCX, D-Block Europe, Burna Boy, NightCrawlers, Sigala, Tion Wayne and more. He has also secured brand and sync deals with multiple companies including Nike, Royal Caribbean and Pretty Little Things.

Jay Grey said: “I targeted FAE as a place that I always wanted to work, because of their formidable track record of breaking acts. I was introduced to Sarah and the team through a friend and I started the next week. Since then, I have worked widely across the management, label and publishing roster. It’s been a really unique journey and has given me an all-round understanding of the business and how everything fits together, and I really look forward to building and further developing our roster of artists, songwriters and producers in my new role.”

Jesse and Jay are examples of executive growth ‘in house’ at FAE, and our dedication to promoting from within

Prior to joining FAE in 2018 as an A&R Assistant, Jesse Dickson began his career as a touring and studio musician. Working primarily with Samm Henshaw, Dickson toured the UK and Europe extensively, joining tours with the likes of Chance The Rapper and Tori Kelly.

Over the past four years, Dickson has worked across management, records and publishing, leading on alt-pop newcomer Flowerovlove, and overseeing a roster of songwriters and producers who have worked on releases with artists such as Afro B, Ashnikko, BTS, Burna Boy, D-Block Europe, Ella Mai, Tion Wayne, Yxng Bane and more.

Jesse Dickson said: “I always wanted to work in the music business and deemed it was time to pursue that outside of performing. Throughout my time with FAE I have learnt an enormous amount and I look forward to the future.”

Sarah Stennett, FAE Grp CEO, said: “Jesse and Jay are examples of executive growth ‘in house’ at FAE, and our dedication to promoting from within. They are both passionate, smart and ambitious and have made huge contributions to the company’s successes over the past few years, proving invaluable to the team. I’m very proud of them and look forward to seeing what we can continue to achieve together.”

“Rita has always been an artist and creator of ‘Firsts’,” said Stennett. “She started releasing music in her teens and has released some of the biggest hits of the decade.Her deal with BMG marks a new chapter for Rita where she can deploy the confidence and knowledge of her artistry and audience in navigating the next phase of her career with her at the helm I’m so proud of the past 10 years we have worked together and I’m so excited for people to hear the music she’s been creating.”

Sarah Stennett was honoured with The Strat at the Music Week Awards in 2016 - at that time, the first woman in nearly 30 years to receive the honour.