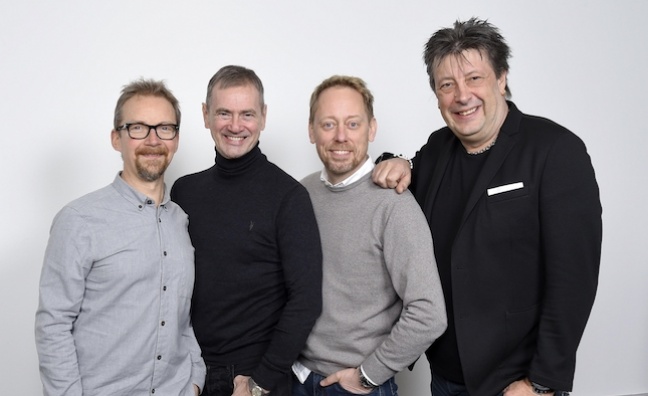 The team behind the Eurovision Song Contest has partnered with producer and television executive Ben Silverman’s Propagate Content on the first-ever American Song Contest, which will air in 2021.

The American Song Contest will welcome musical artists and bands from each of the 50 states and across every musical genre, to perform all original songs on the live televised event.

The announcement was made by The American Song Contest rights owners and producers Anders Lenhoff, Christer Bjo?rkman, Ola Melzig and Peter Settman (pictured), and Ben Silverman.

The Eurovision Song Contest is one of the biggest televised events in the world, with more than 200m people tuning in annually, a larger audience than the Super Bowl in the United States. During the final, audience shares in 40 markets routinely double primetime viewership on participating networks. The contest did not go ahead this year because of Covid-19.

The US music industry has long recognised the power of the event with Justin Timberlake and Madonna launching new music on the show in recent years.

American Song Contest producer Anders Lenhoff said: “Imagine if music was an Olympic sport and artists from all over the world came together to compete for the gold. That’s the Eurovision Song Contest. The American version will be different than anything seen before on US television, marrying the fanfare and excitement of March Madness and the NFL playoffs with the artistry and beauty of world-class performances. The American Song Contest is a competition that happens to be televised, rather than a contest created to make a television show. And it’s open to all singers with a song, whether they are amateur artists or already signed to a major record label. No one is excluded from the competition.”

Silverman said: “For more than 20 years, I’ve tried to bring the Eurovision Song Contest to the United States because it is the greatest and most successful format yet to be adapted. Before I found Who Wants To Be A Millionaire or there was a Pop Idol, Eurovision was dominating the ratings and charts. Put simply, there is nothing else like it on television. The sheer spectacle is amazing. It is a pure celebration of the best in music and the best of what music can be, produced by the world’s elite artisans in all fields of production.

“The Eurovision Song Contest has shown that it can unite different countries and artists for a few nights every year to focus on their mutual love and respect for music. Bringing The American Song Contest and the Eurovision brand to the US is an incredibly ambitious project, but one worth doing, since we think these inherent values are intrinsic to uniting a fractional America through its greatest export and global impact… culture!”

As a lead-up to the live televised competition, Propagate Content and the American Song Contest producing team will create the American Song Contest Academy, a group consisting of music professionals based in the US that represent all genres and backgrounds. These members will create juries of artists and music industry figures who, along with the regional audiences, will select top talent from all 50 states to compete. These representatives of each state can be either solo artists, duos or bands with up to six members.

The format will position the artists head to head against other states’ representatives in a series of five to 10 televised qualifier Competitions, leading to semi-finals and the ultimate primetime final.

Martin Österdahl, executive supervisor, Eurovision Song Contest, said: “The Eurovision Song Contest’s unique legacy dates back sixty five years and its worldwide popularity is still rising. It’s time for America to experience this spectacle, through its sister competition, the American Song Contest. Love of music is universal and celebration of music in different genres and styles can transcend boundaries and unite people. We are excited to have found the right partners to offer another series that our fans across the globe can fall in love with and to share this unique competition with the American people.”