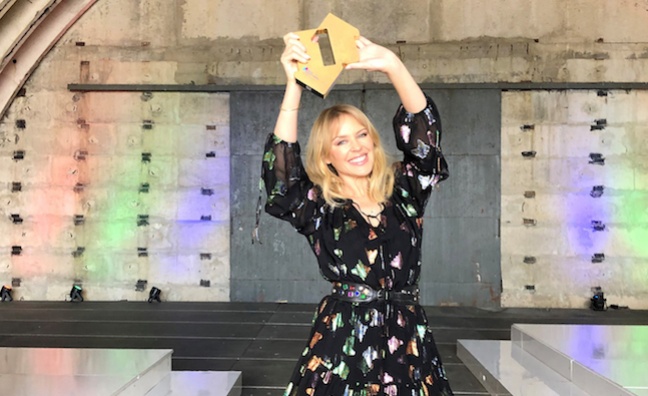 The BBC team behind Glastonbury recently spoke about the impact for artists in their Music Week cover story. Now their confidence in the power of the TV coverage has been proved right with the first sales results from the Official Charts Company following the festival.

The return of Glastonbury after two years has delivered a sales and streaming bonanza for the headline acts.

The Killers’ Direct Hits compilation surged 66-5, following their well-received Saturday headline slot on the Pyramid stage. Direct Hits (Vertigo/Virgin EMI) moved 7,498 copies last week – a week-on-week increase of 323.4%. There was a fairly equal split for the weekly sale across physical (28.8%), downloads (33.5%) and streams (37.7%).

The band’s debut Hot Fuss re-entered at No.39 (2,367 sales). The Killers’ streaming perennial Mr Brightside also returned to the singles chart at No.54 (9,923 equivalent sales).

The obvious Glastonbury winner is Kylie Minogue, whose big TV ratings for her Sunday ‘legends’ slot ensured that her Step Back In Time collection (BMG/Rhino) opened at No.1 (31,980 sales). However, the sale was skewed towards physical (25,992 units, including 5,682 vinyl copies). The album had already registered strong sales ahead of her performance at Worthy Farm.

Billie Eilish’s debut, When We Fall Asleep, Where Do We Go?, edged up 6-4 with consumption jumping 30.31% to 9,428 units. The US singer made her UK festival debut on the Other stage.

Lewis Capaldi, who played a secret show before a full set on the Other Stage at Glastonbury, saw his debut album dip to No.2. But Divinely Uninspired To A Hellish Extent (EMI) still registered an 18.4% weekly sales increase (22,490 units).