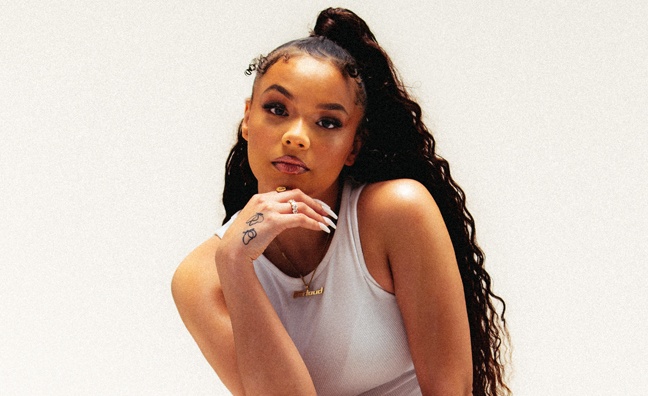 Kali Claire has quickly established herself as one of the most exciting rising artists in the UK. Indeed, since her debut release in 2018, she has amassed more than 20 million streams across all platforms.

Born and raised in Hackney, Kali Claire grew up soaking up the far-reaching sonic influences of her household, covering everything from jungle, R&B and hip-hop to The Beatles and Bon Iver. She started out her journey in musical theatre at the age of just five, before turning to productions at the Hackney Empire, where she developed and solidified her love of singing. From there the self-taught star would go on to hone her skills at the prestigious BRIT school and sign with Too Loud management in 2016.

Pre-lockdown, Kali Claire performed to a sold-out Sofar Sounds audience, delivered stripped-back performances at Soho House, supported Mabel on her European tour, and sold out her debut headline show at The Grace.

Here, Claire tells Colleen Harris all about her remarkable journey so far and the lessons she’s learned along the way...

It looks like 2022 has been a busy year for you in terms of making music. What can you tell us about how your new project is shaping up?
“Since the start of the year I've just been writing. I've had time to think, I’ve had time to get out all the stuff that I want to say and just refine. Because I've been travelling this year, I've been able to work with so many different people. I love collaborating because it brings out a different side of me. [I’ve been] finding a sound that I want to focus on and making sure that every song has a story behind it – whether it’s whoever I made it with, or where I've made it, or just the actual meaning of the song. I'm liking it. It's kind of sad, dance alone in your room [music], but you could also be out on a walk, or on a late-night drive.”

You went to Diddy’s songwriting camp and met him – how was that?
“It was like a movie. I went to Los Angeles for a couple of days and there were so many different creatives solely there to work on his project, and the energy was amazing. I met Jermaine Dupri, Ty Dolla $ign and an amazing producer who did loads of stuff for [Kanye West and Jay-Z’s] Watch The Throne album. I don't really get starstruck but seeing people in the studio, doing what they've made a name for and gained respect for? That’s the part that makes me starstruck.”

And the Alicia Keys project you worked on?
“That was a couple years ago. I wrote at a Rihanna writing camp in 2018, or 2019. P2J called and invited me, he's just an amazing person and creative. Whenever I'm in the room, I’m grateful to be there. I never pass up on opportunities. I got there, they had already started an idea, I jumped on the mic, and we came up with Wasted Energy – and that was on Alicia Keys’ album [2020’s Alicia]. I feel like when you have a good song it travels to wherever it’s supposed to be or to whoever’s ears need to hear it.”

What’s your personal experience of the music industry been like? What’s been the biggest challenge?
“From a very early age, I was going to workshops and getting advice from people in the industry. I worked a lot at Hackney Empire, I did a project with Levi's and Skepta. I guess I was networking but didn't really know it at the time. I feel like the music is what ties everyone together – I feel so safe in a studio, or in a session, or when I'm collaborating with another creative. [The challenge is] having to know everything: making sure you're not being taken for a fool, that you're on top of what you're doing, making sure your songs are registered, that you're signed up to PRS and PPL. If you're going on a tour [you need to make sure that] you're registering where you played, if you're shooting a video it’s knowing what you need for that, and also finding people to mix and master and do artwork. And, as a songwriter, being able to figure out percentages with other people – the business, general communication and emails. There's a lot that is not music in the music industry, I feel like that’s my biggest challenge.”

You were breaking before Covid hit – you had celebrated releases, features, a support slot with Mabel. I know the pandemic affected all artists, but for new acts that threat seemed greater. How was it for you?
“It was really crazy because it was the polar opposite of what I’d just been experiencing. I literally came off a two-and-a-half-month-long tour with Mabel [in the] UK and Europe, and then a week after everyone was in lockdown. I went from meeting new people every day and travelling everywhere to staying at home. Mentally, it was crazy. Musically it didn't hinder me because I engineer myself. I built a little home studio to invest in myself when I first signed my publishing deal with Tinie Tempah in 2017, and it really came to [good] use in lockdown. I made a whole project via email, Dropbox and Google Drive links and recorded songs at home here, then sent them off for mixing. There's this crazy website where you can hear exactly what someone else is hearing on their end, so we mixed online, and I dropped a lockdown project. I felt like everyone was figuring it out at the same time. Some artists pushed releases back, but I didn't stop making music, so I didn't want to stop releasing music. I was in a creative space.”

You're still at the start of your career, but how do you want to impact the music industry?
“I want to make workshops available for anyone who wants to go, whether you're rich, poor, pink, black or white. My mum put me through drama school with the help of my auntie, I wouldn't have been able to experience something like that if they hadn't sacrificed. I'm really passionate about women in music because the facts and figures are just shocking to me – there's less than 5% female engineers in the whole of this industry. I learned to engineer by myself out of necessity, because I didn't have money to pay for studio time by the hour. No one really tells you how. I wouldn't say it's easy, but it's not super hard. If you put your mind to it, anyone could learn.”

Finally, what are your biggest ambitions as an artist?
“One of my biggest ambitions is to go on some sort of global tour, experience the world and create music on the journey. And do a session in every city that I visit because everywhere is so different in the way they create music. My biggest goal as an artist would be a debut album, it’s a big thing for me. [I’d love to] be able to work with all the producers, writers, instrumentalists, and the best engineers that I've met along the way, and all collaborate with no ego in one space, that would be amazing.”