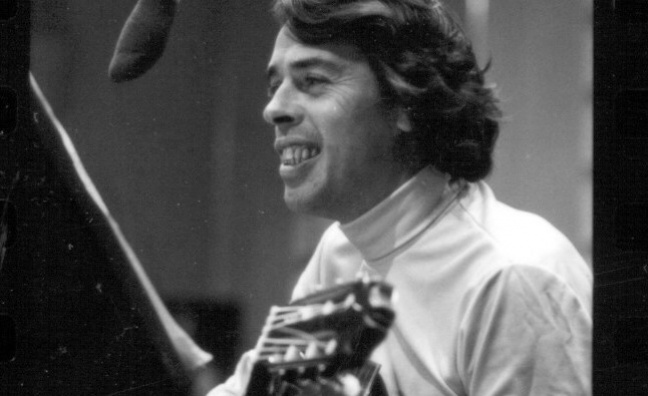 Brel’s music career spanned more than two decades, and he became known as the master of chanson, a lyric-driven style of French music.

David Bowie, Frank Sinatra, Ray Charles, Terry Jacks and Shirley Bassey are among those who recorded English language versions of his songs. In the English-speaking world, his best known songs include Ne Me Quitte Pas (If You Go Away) and Le Moribond (Seasons In The Sun).

The deal was signed with Éditions Jacques Brel, represented by the songwriter’s daughter France Brel.

Matthieu Tessier, MD, WCM France, said: “Today France Brel honoured us by signing this agreement which will see Warner Chappell Music expand its work to cover the vast majority of Jacques Brel’s repertoire.  We already co-published 16 of his amazing works, and our French and international teams worked hand in hand with France Brel to promote these songs in ways that reflected the spirit of Jacques’ work.

“It is one of the most prestigious French song repertoires that Warner Chappell Music is honoured to represent worldwide, a very proud moment for our team, and for myself as managing director of Warner Chappell Music France. I’d like to thank France Brel for her trust and I can assure her that we’ll continue working every day on making this magnificent catalogue known all over the world.”

France Brel said: “To sign a sub-publishing administration agreement with Warner Chappell Music France is the next chapter of a story that began in 1962.  That year, at the request of her husband, Jacques Brel, my mother established the music publishing company Pouchenel in Brussels. Over the years, as my father’s songs proved to be a success, requests to use them continued to increase and Ne Me Quitte Pas began to travel the world.

“Since 1981, working alongside my mother, I became aware of the complexity of music publishing, and I made the acquaintance of our partners including Warner Chappell Music France. From 2004, we worked together more closely when we signed a co-publishing agreement. In 2006, my mother handed me the reins of Éditions Pouchenel, which then became Les Éditions Jacques Brel. What an exceptional gift!

“For many years now my father’s songs have been sung all over the world. To represent his work and consider distribution options in the complex world of publishing requires an extensive international network. At this stage in my life, I am very happy to entrust the Warner Chappell teams to globally represent, outside Belgium, the administration of the Éditions Brel songs, created 60 years ago.”