Bruce Springsteen's still The Boss on albums chart with 12 No.1s 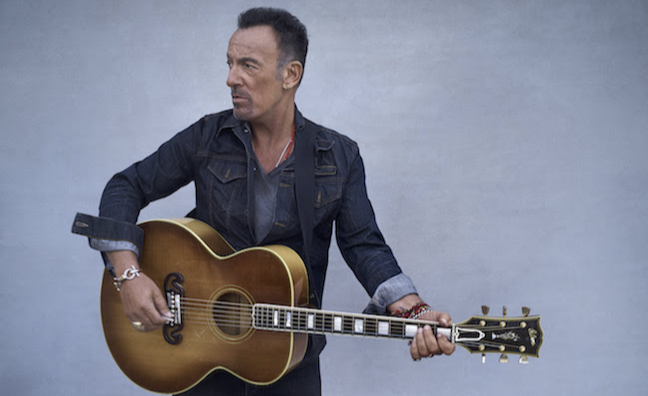 Bruce Springsteen has made chart history this week as he scores his 12th No.1 album with Letter To You (Columbia).

Outselling the rest of the Top 5 combined, The Boss’ 20th studio collection is – based on pure sales - the fastest-selling album of 2020 so far, with 95% of his 51,761 chart sales (Official Charts Company) made up of physical albums and downloads.

Streams contributed 2,381 ‘sales’ for Springsteen. Nothing But Thieves at No.3 with Moral Panic (RCA) actually had the biggest streaming total for a new album in the latest chart (2,426 sales out of a week one total of 11,789), though they still finished behind Gorillaz at No.2 with Song Machine Season One – Strange Timez (Parlophone), which moved 15,343 copies.

Despite a strong start for The Boss, Lady Gaga’s Chromatica still holds the title for the biggest opening week overall for an album this year, debuting at No.1 in June with almost 53,000 chart sales thanks to a strong streaming and physical performance.

His latest No.1 means that Springsteen is the first credited solo artist to have a No. 1 album in five consecutive decades, topping the charts in the ’80s, ’90s, ’00s, ’10s and ’20s. Paul McCartney, John Lennon, David Gilmour and Paul Weller have also achieved the feat, but only when including their work in groups alongside their solo material.

With 12 No.1 albums, Bruce Springsteen is now tied with Madonna for chart-topping albums – Robbie Williams and Elvis Presley are the only solo artists to have had more No.1 albums in the UK.

The strong performance by Springsteen secures Columbia a No.1 ranking in the week’s Top 75 artist album market shares (21.87%)

Meanwhile, in the singles chart Ariana Grande claimed her her seventh UK No.1. Positions (Island/Republic) debuted at the summit with sales of 60,909.

All seven of her chart-topping singles have debuted at No 1 in the UK, meaning she extends her record with the most No. 1 debuts by a female artist, surpassing Madonna, Britney Spears, Rihanna and Cheryl, who have each had five singles debut at No. 1.