Country superstar Maren Morris on where the genre is heading next 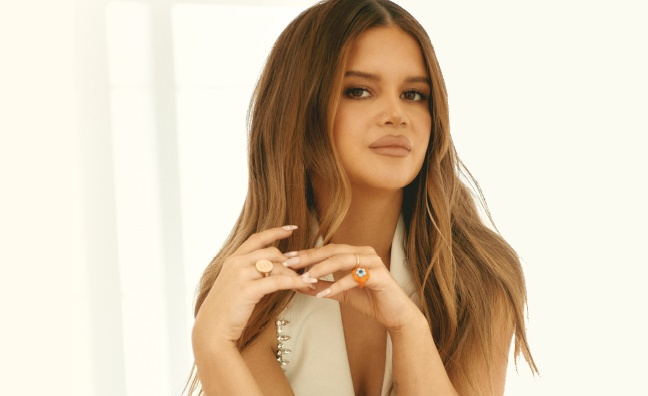 The hugely successful Country 2 Country festival may have already come and gone this month, but it’s worth noting that increasingly the genre’s hold on UK affections is a year round affair. And one artist who’s been at the forefront of bringing it to younger generations is Maren Morris.

Since emerging with her Grammy nominated debut Hero in 2016, Morris has gone on to make a huge impact. Her last record, 2019’s Girl, notched up 24 million streams in its first week, a new record for a country studio album by a woman. One of its standout tracks The Bones was playlisted by BBC Radio 2 and has 276,166 UK sales (OCC), while in the US it is certified platinum and spent 52 weeks on the Billboard Hot 100. Meanwhile, her biggest song The Middle – a 2018 Grammy-nominated EMD crossover collaboration with US duo Grey and producer Zedd –  has over a billion streams on Spotify and 1,229,225 sales in the UK, where it hit No.7.

This week Morris is back in the charts with her brilliant third album Humble Quest. Its first single, Circles Around This Town, was the most-added single at US country radio upon its debut and broke Amazon Music’s record for most streams for a country song debut by a female artist.

In the latest issue of Music Week, Morris has opened up about its creation.

“I think the word humble has been so warped,” Morris said. “It’s been weaponised against women. Once we have a taste of success, or there’s anything that you’ve accomplished or feel proud of, then you feel like you have to make apologies. You have to dumb down to be tolerable to others. I feel like women are so in control, we’re in the driver’s seat of our lives a lot more than our grandmothers were. And yet there’s still this error of making yourself smaller, to be tolerable to the masses.”

“I grew up with supportive parents,” she continued. “But I also grew up in bars and honky tonks, very adult environments at a very young age, and being paid to perform at 10 or 11. I did feel like I needed to be the adult, in a lot of ways. And that carried on into my 20s. When I got my record deal and publishing deal and started touring, that control is what made me so good at what I was doing.”

I wish I heard more diversity on all platforms – not just radio, streaming or playlisting, it should be in our award shows, touring and festival line-ups. It all needs to be better than it is. More people of colour, more LGBTQ representation. More women

The record sees Morris join forces with a host of songwriters, including her husband Ryan Hurd, Jimmy Robbins, Natalie Hemby, Laura Veltz and Jon Green. Also in the credits is superstar songwriter Julia Michaels, who has penned tracks for Britney Spears, Demi Lovato and the Justin Bieber smash Sorry.

“She’s written some of my favourite pop songs of the last 10 years,” Morris told Music Week. “It’s a tough pill to swallow that we’re the same age! She’s so good at being in the room with artists, especially with female artists. She’s so good at getting to the core of what they want to say. Then she sprinkles her genius onto it in the most magical way.”

Another notable presence is producer Greg Kurstin, whose work includes Adele’s 30, as well as producing Morris’ singles Girl and The Bones.

“When I started writing I knew I wanted Greg,” Morris explained. “I mean, if we’re talking about the word humble, Greg is humble. And he doesn’t have to be, because he’s won everything you can ever win, achieved every accomplishment. But he’s so clearly unaware of his magnitude in this realm of music. I have the utmost respect for him.”

Morris also reflected on where she thinks the country music genre is going in 2022 and beyond.

“What I see at the forefront of country is people becoming braver with their productions, statements and songwriting,” she said. “I feel it’s aiming at a more honest place. I love this genre so much: it’s in my bones and at my core. It’s what I love about music and storytelling, so I always try to come from a hopeful place. But there’s some darkness too. There’s a lot of amazing art and new artists coming out, but there’s a lot that needs to change and change quickly.”

Morris is calling for one thing above all else.

“I wish I heard more diversity on all platforms,” she concluded. “Not just radio, streaming or playlisting, it should be in our award shows, our touring and festival line-ups. It all needs to be better than it is. More people of colour, more LGBTQ representation. More women.”