Gary Barlow on his Christmas album and festive collaborators 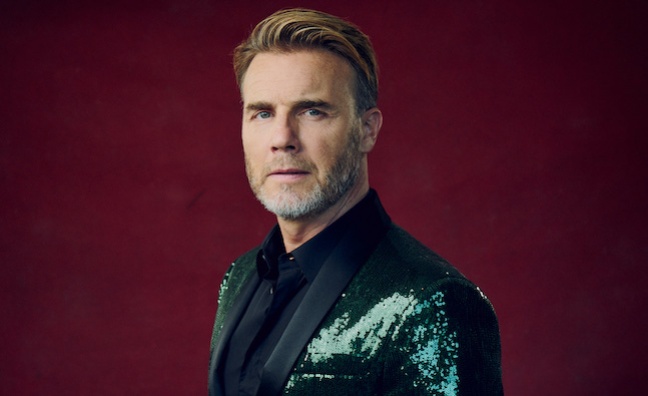 Gary Barlow is the latest star to embrace the festive album concept with the release of The Dream Of Christmas (Polydor).

The Music Week cover star is set for a big Top 5 album in the busy Q4 period. You can read Gary Barlow’s label and management team on the project here.

Here, the Take That legend opens up about his album collaborators, explains how he records a Christmas song and reveals the festive classic he wouldn’t cover...

"This is what's great about our business. I was stood in the wings at Blackpool Opera House, waiting to go on for the finale of the Royal Variety Performance last year. There was no audience, the place is dead, it's the grimmest of grim. Not Blackpool, the fact the theatres were empty, I must say that! And Sheridan said, ‘Follow me on Instagram will you? I'd love to do something together.’ I said, ‘Sure, no worries.’

“When I wrote How Christmas Is Supposed To Be, there was character to the roles. It wasn't just a love song duet, it was almost like an argument, so I sent it straight to her and said, ‘Listen, no pressure, but let me know if you feel like you've got the energy for it.’ Literally, five seconds later, she replied, ‘I'm in, let's do it.’ So I literally got in the car with a laptop, drove up to the Lowry Hotel in Manchester, put a mattress against one side of the wall and recorded her – and that's the vocal. She did a great job and it’s always fun being around her.”

“You've got to pull out all the stops. I've tried to be quite musical with it, I've not tried to simplify it too much. And I think it's about capturing the feelings around Christmas. Last year the surprise to us was we had this song Incredible, it was on an Argos ad and on the radio a lot and we've done really well with it. I said, ‘Hey everyone, I've got a bit of a present here for you, here's a Christmas version of it.’ And that ended up being much bigger than the original. It ended up doing really well on Spotify. On platforms I don't usually perform that well on, it did a really big job for us. Anything goes at Christmas, so for the first time ever I had this licence to just go, ‘I can do whatever I want here.’ So musically, it's fantastic.”

"We've been friends for a long time and we've been trying to find something to do for ages together. And in my journey into Christmas song heaven, I found A Child's Christmas in Wales. It's one of the newer Christmas songs but I absolutely loved it. Again, it was just a simple phone call. I think he was busy with Songs Of Praise at the time but once he'd finished he came over, I think it was about 30 minutes - goes in, does it and yeah, it's great. I love the tune anyway, but there's something that relates obviously to him having been a child in Wales at Christmas. It was lovely."

"Sheku plays on one of the original songs, The Colder It Feels, I had done a Crooner Session with him so I knew how talented he was. And we were talking about doing something with a piano and a cello for Radio 2 and it never happened. So I was looking for another excuse to get him to do something with us and oh, it's so beautiful. He did it once and it was perfect but I made him do it again just so I could enjoy another performance."

“A lot of my favourites, I wouldn't dare to cover. For instance, Last Christmas, you don't cover that - it's as good as it gets. So a lot of them are my favourites, but they're also songs that I felt like I could add something to. Not make better, but different and as appealing as the original so that's an interesting journey."