'I can't wait to get cracking on series 3': Amy Wadge on her Keeping Faith soundtrack 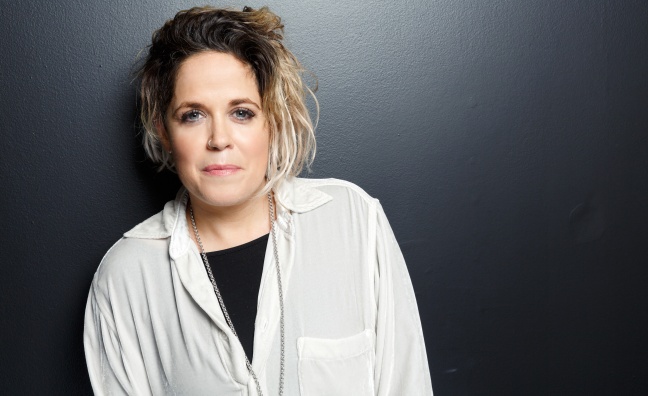 Amy Wadge is a big deal in the co-writing world with credits on songs by superstars including Ed Sheeran, Kylie Minogue and Camila Cabello.

In the latest issue of Music Week, we reveal how she's now achieved solo success with the soundtrack to Welsh BBC One drama Keeping Faith. It's particularly welcome for Wadge, who lives in Wales and is friends with the show's star, Eve Myles.

The signature tune Faith's Song (Cold Coffee Music/ADA) has sales to date of 118,600, according to the Official Charts Company. The two mini albums for each of the two series have combined sales of more than 41,000.

There's even a solo tour booked off the back of the TV-led breakthrough. Here, Wadge opens up about her surprise soundtrack success....

Faith's Song recently cracked the Top 75 a year after release, thanks to the return of Keeping Faith on BBC One. How does it feel to have chart success with the soundtrack - and why do you think it's connected?

"It has all been such a huge surprise. I trained as an actor many years ago and Eve Myles was the year below me. She and I have remained friends and she reached out to ask me if I would write some songs for the first series. I didn’t have a huge amount of time as I was about to go to the US for work, so I read the whole first series over one weekend and sent the songs in not really knowing how they would be used. I sat down with everyone else when it first aired and was gobsmacked that they used the songs so prominently. I think Eve and the director really wanted the songs to truly represent what was happening in the story rather than just try and find material that ‘worked’. For me it was a bit of a gift, as usually I am writing specifically for an artist, so I had a pretty blank canvas to do what I wanted with Keeping Faith."

The use of the music in Keeping Faith is central to the series...

"I didn’t know at all with the first series [how the songs would be used] until I saw it. With the second series, I obviously had that slightly in mind and the director Pip [Broughton] would ask me to write specifically for some characters or plot lines. But it’s still been lovely to sit down and watch how they have been incorporated. I definitely had a lot of material to work with, as Matthew Hall’s writing is so good. It’s pretty inspiring when you have a whole picture created for you already, so I just read the script and wrote what I felt as a result."

You live in South Wales, did that bring about the work on Keeping Faith?

"I have lived in Wales for over 20 years, so there is no doubt me living here had something to do with my involvement. It’s been so wonderful to do something at home, as I spend so much time in the US working. It’s meant the world to me that Wales has had this degree of attention, as to me it’s the most beautiful place with so much talent here. I went on set once during the recording of the first series and I was definitely inspired by the landscape. There is a running theme in all of the songs of the ocean; it’s impossible not to be inspired by the sea as it’s so dominant in the show."

Why do you think viewers have embraced the show?

"It's so hard to know exactly why it’s connected so much. Eve is utterly brilliant in it. I’m 43 with two kids, so I identified so much with Faith’s character in terms of juggling kids and work (luckily not my husband disappearing). I just think the show is so real and honest, and I’m so honoured to have been asked to be part of it. I’ve loved writing the songs and can’t wait to get cracking on series 3."

What co-writes and other projects are you working on - and do you want to now do more TV work?

"I feel like Keeping Faith is a priority for me in terms of TV work, it’s been a wonderful thing to be part of. I wouldn’t want to try and recreate the same thing in another show, as it wouldn’t feel authentic - but never say never.

"I divide my time between the UK, LA and Nashville. In Nashville, I’ve recently been working with Thomas Rhett, Lady Antebellum, Brantley Gilbert and Lauren Alaina, and in LA I’ve been writing with Camila Cabello, John Legend, Gwen Stefani, Jonas Brothers, Noah Cyrus, Alec Benjamin and lots of other amazing people. I have lots of stuff coming out in the next quarter, so I’m super excited for that to happen. Mika is releasing an album in October that I’ve worked on, and there are lots of other projects I’m part of that I can’t talk about yet."

To read the Music Week feature on Amy Wadge's Keeping Faith soundtrack, pick up the latest issue - or subscribers can click here. To subscribe and never miss a big industry story, click here.