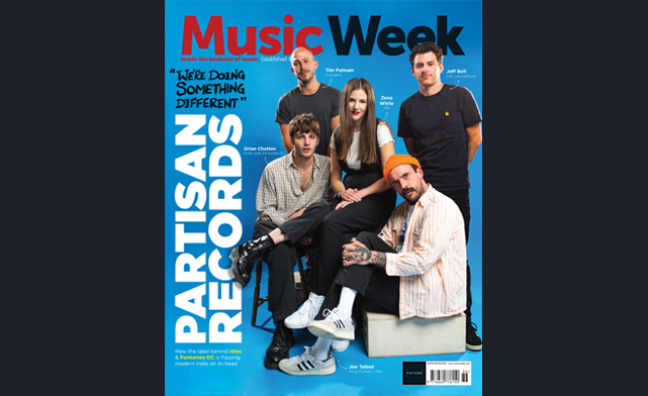 In the new issue of Music Week, out now, we catch up with white hot indie label Partisan Records to find out about its mission to redefine music culture.

To mark the end of the summer, we host our annual festival roundtable with Glastonbury and The Great Escape’s Martin Elbourne, Isle Of Wight Festival promoter John Giddings, End Of The Road MD Lauren Down, From The Fields director Ben Robinson, Standon Calling founder Alex Trenchard and Association Of Independent Festivals CEO Paul Reed, who reflect on the highs and lows of the 2019 season.

Also in news, Warehouse Project co-founder Sam Kandel shares his ambitions for the series in its new 10,000-capacity Manchester venue, Depot at Mayfield, and former Muse tour director Glen Rowe speaks exclusively to Music Week about his next move.

Meanwhile, star songwriter Amy Wadge discusses her streaming success and her TV-led revival as a solo artist after soundtracking the BBC One drama Keeping Faith.

In a guitar hero double, Francis Rossi revisits Status Quo's first No.1 single Down Down in Hitmakers and The Darkness frontman Justin Hawkins dishes out some life lessons in The Aftershow.

Rising Star is BMG A&R manager Dan Owusu and BT Sport head of music Pete Kelly is this week's Tastemaker, while Phoebe Green dissects her oddball pop in On The Radar. Elsewhere Irish rapper Nealo features in Making Waves and Lizzo's collaboration with Fiat is the subject of Sync Story.