'It's been a remarkable journey': OMD toast their 40th anniversary 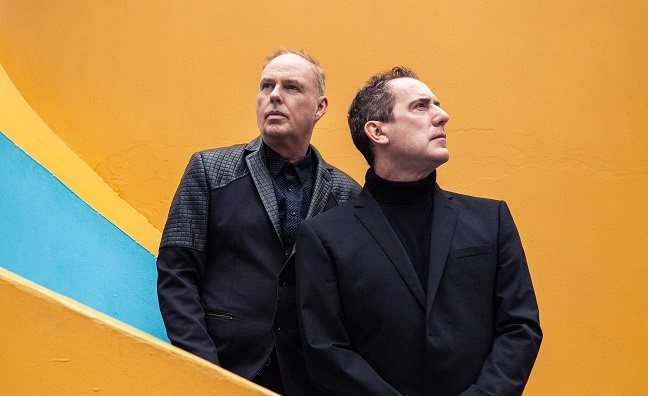 Electronic pioneers Orchestral Manoeuvres In The Dark (OMD) have spoken to Music Week about their 40th anniversary tour, which kicked off in Belfast last night (October 23).

Co-founders Paul Humphreys and Andy McCluskey, who recall the story of their 1981 choral classic Souvenir in this week's Hitmakers, tour 21 UK venues this autumn as part of a huge global trek.

"It is the longest tour we've done in a long time." said Humphreys. "We've just done two months in America and we're about to do 35 shows before Christmas. Busy times – and we never could have imagined it.

"And then another 14 in January, February and then festivals," added McCluskey. "Then we're going back to America and Canada, and we're going to Australia at the end of next year."

OMD released career box set Souvenir and a brand new greatest hits collection on October 4 via UMC/Virgin, which charted in the UK Top 20.

"It's incredible to think that, when we first started, an album and a concert ticket cost the same," noted McCluskey. "It's quite remarkable how the shift has happened in 40 years, but we are so blessed that we can still play live and people want to hear us.

"The reality is, in this wonderful postmodern era, if you have a catalogue that is considered of value and you can still play it – which we can – people will come and listen to you."

"We were only going to ever do one concert in October of 1978," said Humphreys. "No one's more amazed than us that we're still here 40 years later."

"We've overstayed our welcome by 39 years, 364 days," laughed McCluskey. "As Paul said, we were only going to do one gig. It was just a dare. And then just we got offered another gig and that's when we went to Factory [Records] in Manchester and met Tony Wilson. We gave him a cassette and his wife found it in the junk bag that he was going to throw out, and she liked it. It's been a 40-year blessed accident and we love it.

"We are blessed, considering we were probably the guys least likely to when we were a pair of unreconstructed hippies, who were into German music in Eric's Club in Liverpool when everybody else was into playing guitars and being alternative and rocky and punky.

"We had a crazy name and we invented the band for one gig. It's been a remarkable journey, considering!"