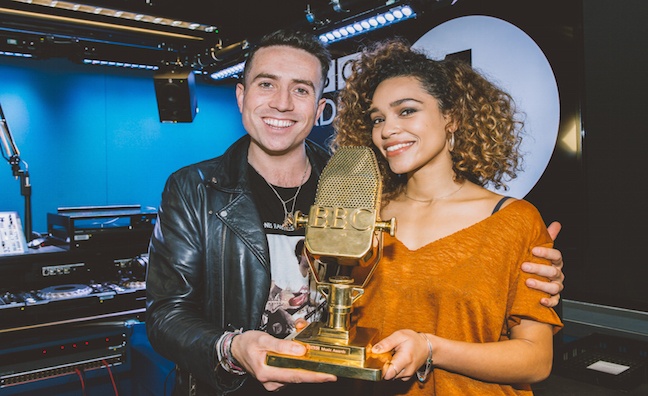 Izzy Bizu has been crowned BBC Music Introducing Artist of the Year ahead of the BBC Music Awards, which takes place on December 12 at Excel London.

The announcement was made earlier this morning on the Radio 1 Breakfast Show with Nick Grimshaw.

The BBC Introducing platform for emerging musical talent showcases unsigned artists and has helped launch the careers of acts including James Bay, Jake Bugg, Florence and the Machine, and George Ezra, plus many more since its launch in 2007.

“It’s an amazing honour to have won BBC Music Introducing Artist of the Year,” said Bizu. “The BBC has been hugely supportive of my music ever since my independently released Coolbeanz EP and it’s a real honour to follow in the footsteps of acts like Jack Garratt and Catfish and the Bottlemen.”

Jason Carter, head of BBC Introducing, added: “Izzy is a huge talent that I’m certain will be a huge success story both at home and abroad. I’m proud of the part that BBC Introducing has played in launching her career and look forward to her live performance at the BBC Music Awards, and supporting her in the years to come.”

Bizu began her journey with BBC Introducing back in 2013 when she uploaded her EP Coolbeanz to the talent scheme’s website. Picked up by her local BBC Introducing show on BBC Radio London, she gained exposure on the Radio 1 and 1Xtra BBC Introducing playlist slots. She went on to support Sam Smith, Rudimental and Foxes on their UK tours in 2014, and last year performed on Later…with Jools Holland and was shortlisted for Critics’ Choice Award at the Brit Awards.

This year, she was longlisted for BBC Music Sound of 2016, performed at and was nominated for Best Newcomer at the 2016 MOBO Awards, opened the 2016 BBC Music Day concert from Cornwall's Eden Project on BBC One, and was the voice of the BBC Euro 2016 theme tune, singing her version of Edith Piaf’s ‘La Foule’.

Bizu is now signed to Epic Records Sony and released her debut album Moment of Madness. She will perform live on BBC One and bbc.co.uk/music on Monday, December 12 from 8.30–10pm with additional programming on Radio 1 and Radio 2, alongside Kaiser Chiefs, Craig David, Lukas Graham, Zara Larsson, John Legend, Emeli Sandé, Robbie Williams and The 1975.