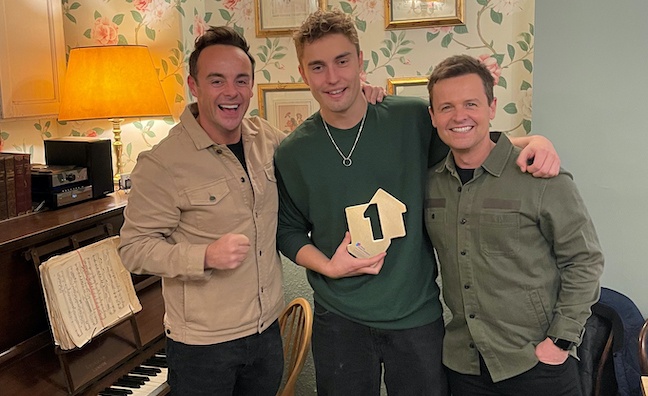 Sam Fender has scored his second No.1 album.

The singer-songwriter debuted at the summit with Seventeen Going Under (Polydor), which matched the opening week’s chart performance of his 2019 debut Hypersonic Missiles.

Seventeen Going Under’s 43,717 sales (including 34,603 physical copies) gave Sam Fender the fourth biggest opening of the year, behind albums from Dave, Olivia Rodrigo and Drake. It came close to selling out the rest of the Top 10 combined.

Seventeen Going Under also claimed No.1 on the vinyl albums chart, and it was the biggest seller in independent record shops this week.

Polydor co-president Tom March gave his reaction to Music Week about the No.1 album and strong sales for Fender’s 2022 tour.

"Sam's done really well this week, we're very happy with that and he's just sold 70,000 tickets this morning already so that's very good," said March. "I'm so happy because he's one of the good guys, you could not be happier for him but it's everything you hoped it would be for a second record. The critical reaction has been incredible, the reaction from the fans has been beyond anything we could have hoped for. And the fact he's really connecting on streaming is unbelievably exciting for us."

Sam Fender makes a further chart impact with debut LP Hypersonic Missiles, which climbed from No.70 to No.39. It has sales to date of 230,533, including 40,913 from its opening week.

"We just did a brilliant video with Stephen Graham and that is really, really moving," said March. "It's really reacting. Greg James played it in the week, and he posted his inbox just exploding with people saying how much they love the song. It's a song that Sam wrote about his father, probably Sam's favourite song on the album.

“We've actually moved it to be our next single - it wasn't going to be but the reaction to it is just unbelievable. So it looks like we've got a proper single hit as well on our hands with Sam, which is probably the one thing that we've been missing. It feels really exciting and I can't wait to watch that one grow as well over the coming weeks.”

Fender has added further dates to his spring 2022 arena tour. He will now play two nights at both SSE Arena, Wembley and Utilita Arena, Newcastle.

He received his official No.1 trophy from Geordie heroes Ant & Dec.