The 2020 Scottish Album of the Year Award winner revealed 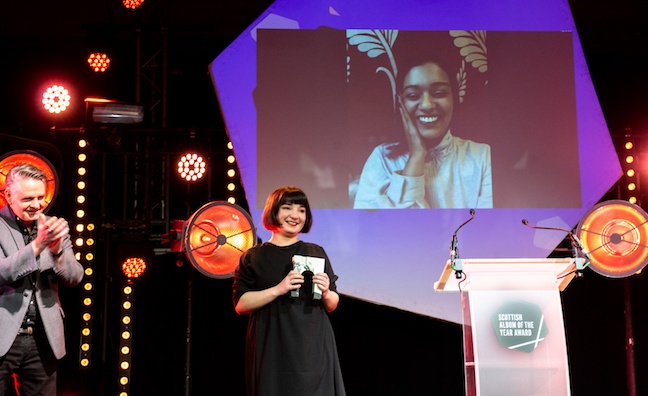 The Scottish Album of the Year (SAY) Award winner for 2020 has been revealed as rapper, producer and DJ Nova who takes home the award at just 24 years old, making her the youngest ever recipient.

Nova (a.k.a. Shaheeda Sinckler) received her trophy and £20,000 prize digitally via video link due to a positive Covid-19 test, while her manager, Sof Staune (VAJ Power) revealed the news live on stage.

Edinburgh-based Nova is also the first to win with a rap/grime album for her debut Re-Up.

On winning, Nova said: “It is such an incredible feeling to have won the 2020 Scottish Album of the Year Award, just a couple of weeks shy of my 25th birthday! It is so affirming - any doubts that I might have had previously are now out of the window and I’m seriously so excited for the future. I’m excited to keep on this upwards trajectory, thrilled to encounter new experiences and take my professionalism to the next level. To think that my manager and I had no idea where we would end up when we started working together and now to have made it here is just fantastic!”

This year saw the SAY Award receive over 300 album submissions, and its shortlist comprised of the most debuts in its history. The remaining shortlist artists also received £1,000 each including Blanck Mass, Bossy Love, Callum Easter, Cloth, Comfort, Declan Welsh & The Decadent West, Erland Cooper, The Ninth Wave and Shhe.

Judged by a panel of professionals from across the industry such as Edith Bowman, Jack Saunders, Jess Brough, Ally McCrae, Charlotte Dryden, and chaired by John Williamson, the decision was made through a series of virtual meetings.

General manager of the Scottish Music Industry Association (SMIA), Robert Kilpatrick, said: "Nova’s SAY Award win for Re-Up sends a powerful message of hope and ambition to Scotland’s music scene at a time it’s never been needed more. Re-Up is Nova’s debut body of work. Poignant social commentary and unfiltered truth is set against the backdrop of bassy trap, lo-fi hip-hop and heavy grime, resulting in a record which is well crafted, authentic and necessary. The fact it was delivered with the support of a range of local producers from across Scotland only goes to show the passion, strength and innovation of Scotland’s growing hip-hop/rap/grime scene, which I’m delighted that The SAY Award is shining a bright and well-deserved spotlight on through Nova’s win.”