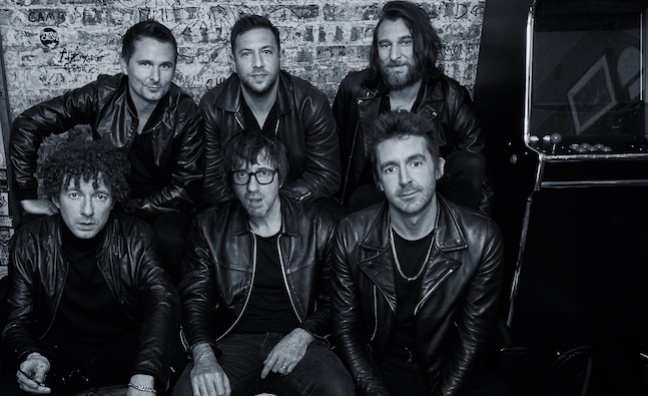 The Jaded Hearts Club covers band have big plans following the release of their debut, according to BMG A&R consultant Korda Marshall.

As well as Muse’s Matt Bellamy on bass, the line-up includes frontmen Miles Kane (The Last Shadow Puppets) and Nic Cester (Jet), alongside guitarists Graham Coxon (Blur) and Jamie Davis, plus bassist and drummer Sean Payne of The Zutons.

The band’s debut album You’ve Always Been Here was released by Infectious/BMG on Friday (October 2).

The Jaded Hearts Club was formed in 2017 after former Transcopic Records boss Jamie Davis had tried, unsuccessfully, to book a Beatles covers band to play at his birthday in LA.

The group have since diversified beyond The Beatles classics aired at last year’s 100 Club gig into raucous reworkings of Motown and Northern Soul songs.

For Korda Marshall, it was also a reunion with Matt Bellamy, who he first worked with during the rise of Muse in the ’90s and beyond. Here, Marshall opens up about the ambitions for the supergroup…

How did you get involved with The Jaded Hearts Club?

“I signed Muse to Warner in the ’90s. I first signed them to Mushroom Records when they were 17 or 18. I’ve known of Matthew [Bellamy] since he was about 15 from his piano teacher at school and through Sawmills Studio. So that's how I first encountered Matt. We’ve kept in touch, I was involved in the first five [Muse] records and he’s a dear friend. So when this all started to come together, I thought it sounded really interesting. I was aware of the concept of what they were trying to do. It fits nicely into BMG in terms of Infectious.”

How did you bring them to the label?

“I signed them last year. Miles Kane was signed to BMG by Jamie Nelson at the same time, so it made sense. Jamie Davis, who's the guitarist and manager, I really like. We had lunch and a couple of meetings, and we then signed the deal in mid-February. I went to LA the week before lockdown and signed the deal there.”

“I love A&R-ing a supergroup. We try not to use the word supergroup, really they’re just a collection of mates. It's a lovely story of how it came together with Jamie trying to find a covers band for his birthday. Then he rang up his mates and they played a few songs, and that developed into the show at The 100 Club, which is where I first heard about it. They did that show for a live charity album. It reminds me of The Who’s Live At Leeds – it has such energy and the songs are great. It's really good for them to be able to freeform on classic songs and bring them into the 21st century. They really contemporise those great songs, so they're not just doing covers – they’re interpreting them and doing different things.”

They had a tour pulled because of Covid, but are there plans to go on the road when that’s possible?

“They were going to do a week at The 100 Club and there was a whole tour planned. They’ve all got plans as well, Graham’s on the new Bastille single, which is great, so they’ve all got other projects. But there definitely will be dates as soon as the Covid environment opens up to shows. They want to play hot sweaty gigs with people jumping up and down. Obviously that’s not going to work in a semi-acoustic space or seated space.”

What about more albums?

“The more we developed it, the more it became like a real thing rather than just a side project. There are definitely going to be more albums. There’s a dialogue about the songs for the next record. Some of the media are going, ‘Oh, it's just a side project’. But all of them are taking it very seriously, it's a proper project. There’s a long-term plan, it’s a two to four-year project. It’s not just about this month.”