'We're at that very exciting stage': Ted Cockle talks cracking the US with Lewis Capaldi 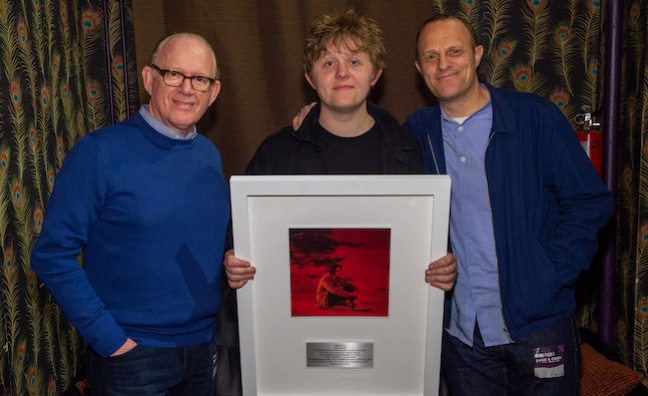 While Capaldi looks set to be overtaken this week by Ed Sheeran in the UK for the fastest-selling LP of 2019 so far, Divinely Uninspired To A Hellish Extent (first week OCC sales – 89,506) continues to make an impact domestically and globally.

As well as being the biggest-selling artist album for the first half of 2019 (270,321 sales to date – OCC), Capaldi’s debut LP and biggest single are still making a strong impression internationally. Someone You Loved is at No.12 and climbing Spotify’s global Top 200, while the album is No.26 globally on Apple Music.

“It’s a great situation,” said Cockle. “It’s the pleasure of just seeing somebody who’s beginning to push boundaries in most territories and America is beginning to recognise and register the power and potency of this lunatic man, his personality and the songs that he’s created and crafted. It’s slowly, day by day, knocking down more and more doors. His high-grade banter and very esoteric and idiosyncratic view on the world is beginning to resonate further and further afield from Bathgate in Scotland.”

Capaldi made early gains upon the album’s US release. Virgin EMI and US partner Capitol recently presented Capaldi with a plaque for over one million global adjusted album sales, including more than one billion combined streams.

Cockle said US radio has embraced “songs that are really working for the formats”. As well as hitting No.1 on Spotify’s Today’s Top Hits playlist, Someone You Loved has been a hit at Hot AC radio and is climbing the Hot 100 with a new peak of No.36. Divinely Uninspired… is moving back up the US album 200 chart, where it currently sits at No.57 following its peak on debut at No.49 last month. Last week Capaldi claimed the top spot on Billboard’s Emerging Artists chart.

“There are some sizeable inroads being made into America, we’re at that very exciting stage,” said Cockle. “We’ve not penetrated in depth, but most of the key people who can make the decisions and help, he’s now fully on their radar and they’re considering how they can fit him into their plans.”

Following last month’s US late-night TV debut on The Late Show with Stephen Colbert, Capaldi also performed on The Late Late Show with James Corden. A US summer tour was upgraded and further autumn dates were soon confirmed. He launched his US debut album campaign at the Irving Plaza.

“Manhattan welcomed him with the crowd singing virtually every word of the full set, it’s beginning to bite and his infectious energy and lunacy is growing,” said Cockle.

The Virgin EMI president said Capaldi is well prepared for his success.

“I was having a good chat with his Dad, and from about the age of four Lewis realised that he wanted to do music for a living,” said Cockle. “His Dad was telling me a great story, they put him in a [family] ice cream parlour and he was absolutely bloody useless, they had to ask him to leave. Basically, he’s just prepared for this. What happens sometimes is that the artist writes one song and becomes famous. Whereas, I think Lewis realised that he just wanted to do music for a living, and if that meant that he was in front of 80 people in a pub, he’d be happy with that.

“He spent so many years just doing nothing else but preparing for this. So when he’s at the Irving Plaza and the great and the good are all rolling out to see him, it’s another day’s work for Lewis. He loves to be able to convey his songs and have a laugh – he still had his toilet plunger on stage at Irving Plaza in front of the groovy Manhattan set. He’s unchanged and completely unfiltered by whatever stage he’s put on.”