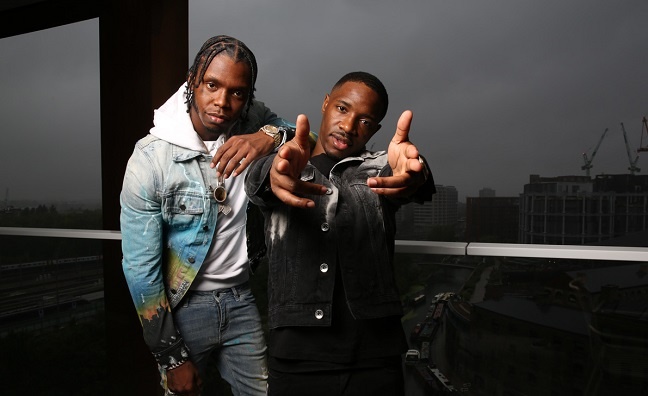 Krept & Konan have issued a reminder to the music industry ahead of their new album.

The South London rap duo star on the cover of the new edition of Music Week, and invited us into the studio to hear the as-yet-untitled album, which features a posthumous verse from Krept's cousin Cadet, among a stellar list of guest appearances. The concept of the record is based on Frank Sinatra's quote, "The best revenge is massive success".

“We want to make sure people know Krept & Konan and recognise what we did,” said Karl ‘Konan’ Wilson. “’Hello, we’re here!’”

The forthcoming record follows 2017 mixtapes 7 Days and & 7 Nights, which became the first ever new releases by the same artist to debut in the Top 10. They have sold 68,556 and 30,776 copies respectively, according to the Official Charts Company.

After exploring R&B and melody on 7 Nights, the upcoming LP will heavily feature the pair’s signature hip-hop sound.

Discussing the new album, Casyo ‘Krept’ Johnson said: “We wanted to do bars to remind people that we can rap. We wanted to make music we feel will last. That’s why we make feelgood records, songs with that feeling that makes you want to dance, get up.”

Krept added: “Our rapping and our lyrical abilities come from how we’ve grown up. Bars are our thing. Our albums always have bars, something that touches real life and something that makes you want to dance.”

Krept & Konan starred as judges on BBC TV’s The Rap Game UK this summer alongside 1Xtra’s DJ Target, and opened their Crepes & Conest restaurant last year. They told Music Week that UK rap is in its best ever position “by a country mile”, a sentiment echoed by manager Riki Bleau.

“People are in the charts making whatever music they want to make and selling out shows, too,” said Konan.

“And everyone’s doing it at the same time, before there’d be like two or three at a time, the radio wasn’t taking as much urban music, they were only letting this person or that person come through, or it was very difficult to even get on radio in the first place.”

Krept & Konan have been releasing music since 2009, pushing tracks independently until signing with Virgin ahead of 2015 debut album The Long Way Home (59,977 sales).

“This is where we’ve been trying to get all these years and to still be in it while it’s happening is a blessing,” said Konan. “Of the people who’ve helped get [the scene] where it’s got to and been through the struggles and the hurdles, a lot of them aren’t as popping as they were. It’s good that we were a part of getting it here and we’re still reaping the benefits.”

The pair launched their new album campaign with Ban Drill, followed by I Spy featuring K-Trap and Headie One, which broke into the Top 20 and has 152,643 sales to date.

Ban Drill came with an accompanying film and addressed police censorship of musicians. It resulted in Krept & Konan being invited to debate the issue in Parliament with Diane Abbott MP.

Konan also addressed the character of the pair’s music.

“To everyone else it looks like we’re glamourising the fact we’re from the streets, but what else are you gonna talk about? Ponies and selling furniture?” he said. “This is what we’re doing and we’re going to rap about it. Don’t get me wrong, what we’re talking about and where we’re coming from is a negative, but this what we’re living.”