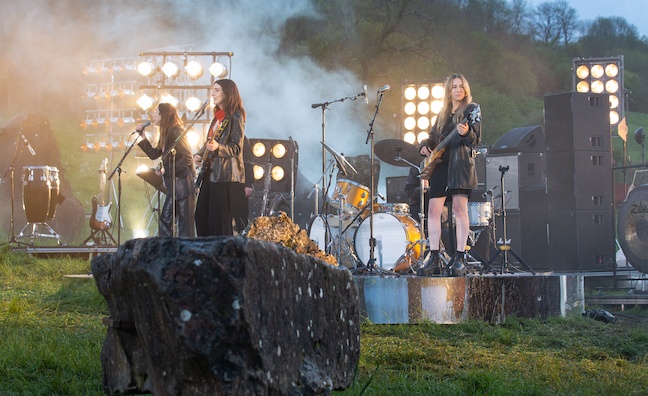 Glastonbury Presents - Live At Worthy Farm global livestream will be broadcast this weekend in partnership with Driift and BBC Studios Productions.

The ticketed event, which premieres at 7pm tomorrow (Saturday, May 22), has been filmed across the festival site over the past few days at landmarks including the Pyramid Field and the Stone Circle.

Live At Worthy Farm will be broadcast online and in full across four separate timezones, with staggered livestreams. Glastonbury festival was cancelled for the second year in succession because of the ongoing pandemic and is slated to return in 2022.

Earlier this week, Driift announced it was partnering with Spotify on five intimate, ticketed performances by The Black Keys, Rag'N'Bone Man, Bleachers, Leon Bridges and Girl In Red.

What have been the main challenges in putting together Glastonbury Presents - Live At Worthy Farm?

"We're creating a narrative, which is hugely exciting. We're building a narrative from start to finish and bringing the viewers on a journey with us - visiting parts of the site they may recognise and discovering parts of it they might not. No one's done a big livestream festival in that way before and it's been a huge undertaking because there are so many artists involved. But it's going to be a beautiful piece of work and we can't wait for everyone to see it."

How does producing a livestream festival compare to a one-off show?

"That's what we've been discovering. I think we've completely nailed artist livestreams, but there are many artists performing at this event so the fan-artist relationship is not as direct. There are multiple layers to it and it's a chance for people around the world, who never get to go to Glastonbury for a variety of reasons, to experience the site and experience the magic. But obviously it's not Glastonbury Festival, it's Glastonbury Festival Presents - Live At Worthy Farm. So we're not trying to pretend we're replicating the festival, it's a different format.

How did you settle on the £20 price point?

"We wanted to make sure that everyone around the world could access it and I think £20 is a bargain for what you're getting - five hours of amazing footage and some of the best artists in the world for that price. We went for what we felt was a fair price - and we've kept the price point more or less the same in all currencies - so that as many people as possible around the world could experience the magic of Glastonbury."

So what happens to the livestream format when concerts return?

"Everyone is asking that and I think it's a really good question. But I don't see live shows as a competition at all - it's a different piece of content. They're not the same experience, even slightly. 'Livestream' is a catch-all phrase describe anything from high level production with unique creative to potentially very low budget and low quality. Some people might have had bad experiences and been turned off the format, so that's what I'm more worried about. For us, it's about making sure the livestream format is kept exciting and high quality. Shows will come back and we're excited for shows to come back - we're all music lovers at Driift. We've all missed shows and we all want to go back to them. This is just a different thing for people to get their head around, just like back in the day when we had to start shooting social content - that seemed a crazy thing to invest in back then and you couldn't even monetise that. Livestreaming is a monetizable format that engages users around the world and I think it's here to stay. "

Do you see Driift livestreaming in-person festivals down the line?

"We're still exploring how we would do what people call a 'hybrid' format. Obviously, the creative that we've produced so far has been for the user at home, so that is an intimate creative with the artist front and centre. So if we were to go into the hybrid model, which we may, how do we make it so the viewer doesn't feel like a second class citizen at home with FOMO  watching other people having fun? Because that's when the format is less exciting. Right now, what we're shooting is hugely exciting, because it's made just for people at home. So if we can keep that integrity in place, then 100%, we may look at doing hybrid models, but we're still trying to figure out, how do we make sure that it feels like a great experience at home, otherwise there's no point selling those tickets."

Finally, Spotify have announced this week they're exploring livestreaming, and partnering with Driift on five shows - what can you tell us about that?

"This is really exciting for Driift. From day one, our business has been about collaboration and partnerships, and delivering the highest quality show for the artist. We don't do cookie cutter. We want to make online shows worth paying for. With Spotify, we've produced five events. There's The Black Keys in Mississippi, Rag'N'Bone Man at the Roundhouse, Bleachers - they're playing on a bus in Brooklyn - Leon Bridges at the Gold Diggers Hotel and Girl In Red in Oslo. The shows are all ticketed, although, as you'd expect, creatively they're all very distinct. Obviously Spotify is an incredibly powerful partner for us to work with, and we've got high hopes of engaging and exciting even more fans with this format and on a global basis."