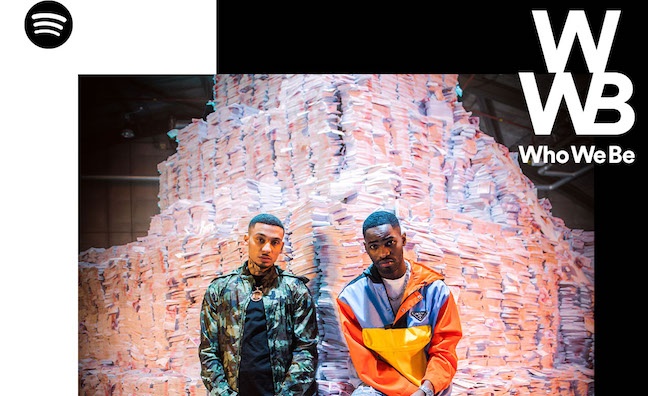 Spotify has revealed the power of its influential UK and Ireland curated playlists Altar, Who We Be and Our Generation.

In its latest financial results, the streaming giant said that the pandemic may have helped subscriber growth as the platform became a lifeline during lockdowns.

By analysing streaming data from 2020, the DSP has also singled out artists who directly benefited from inclusion the playlists.

Who We Be covers rap, grime, R&B, Afrobeat and dancehall hits; Altar is the destination for electronic dance music; and Our Generation showcases new and emerging genre-less sounds. Curated by Spotify’s team of music editors, each has become a musical community that aims to connect artists and fans of those genres.

James Foley, editorial lead for UK and Ireland at Spotify, said: “We’re continuously expanding Spotify’s support for emerging talent and our editorial playlists are just one example of how we do this. Our editors are hugely passionate music fans who are constantly connecting the Spotify audience with new and exciting artists - it’s one of the most gratifying things we do.

“Throughout 2020, our playlists have allowed artists to find new fans and build an audience on Spotify. The real-time audience data we get from these culturally significant playlist brands give a unique oversight of the British and Irish music scene.  We are so excited to see how these artists' stories grow in the next twelve months and beyond.”

Our Generation saw an 18% year-on-year increase in streams in 2020. Beabadoobee, Thomas Headon and Biig Piig were among the artist playlist takeovers.

Our Generation played a key role in the rise of artists including Holly Humberstone, who has grown her monthly listeners above two million since Deep End was added to the playlist in early 2020.

Alternative R&B star Kamal, who signed to the same label as Dave (Neighbourhood), secured the second most streamed track on Our Generation with Homebody after he featured on his first Spotify playlist cover in early 2020. Since then, he has seen an 84% growth in listens.

Smoothboi Ezra became the final cover artist of Our Generation in 2020, following success with the track Familiar Sadness Is Too Comforting.

Dance & electronic playlist Altar saw a 193% increase in playlist listens in 2020. There have been signs of an increasing appetite for uplifting tunes during the pandemic.

One of the biggest breakthroughs of 2020 was award-winning producer Fred Gibson, under his Fred Again alias. He was one of the top 20 streamed artists on the playlist in 2020.

Tsha, who featured on the playlist cover in both 2019 and 2020, was the third most streamed UK female artist on Altar in 2020 ,with an increase in year on year streams of 134%. Her record Change with Gabrielle Aplin, which was recorded at a Spotify Songwriting Camp in 2019, became one of top 100 streamed tracks from Altar in 2020.

India Jordan was one of Spotify’s Radar first listen artists in 2020 and went on to win DJ Mag’s Best Breakthrough Producer. Having featured in Altar, India Jordan’s streams increased by 388% last year.

The playlist has also boosted steams for DJ, producer, singer and songwriter Bklava from Brighton. Building on the resurgence of UK garage, Bklava went on to be in the top 100 highest streaming artists in the playlist last year.

The Who We Be playlist has grown massively since its launch in 2016 and is now the UK’s biggest rap, grime and R&B playlist, with over half a million followers.

One of the biggest breakthroughs in 2020, commanding more than 200,000 streams from the Who We Be playlist alone, is Central Cee. Since he joined the Who We Be Community, the artist’s followers on Spotify have grown by just under 40,000. (359%)

S1mba peaked at No.2 in the UK Top 40 in April 2020 with Rover. It followed his arrival on Who We Be in 2019, where he was initially discovered and went on to enjoy the best performing track for 2020 with 170 million streams overall. The Zimbabwean-born Londoner is the 15th most streamed artist overall on the playlist, and since Rover was released he has seen a 16,435% rise in listens.

After being featured on the Who We Be playlist, Tiana Blake’s Cut Ties became the best performing traditional R&B track from a British artist in the playlist. The track then went on to make waves in global Spotify lists such as Chilled R&B and saw a 159% rise in streams.

Darkoo also had a strong year on Spotify and became the most streamed British female artist in the playlist with songs including Gangsta, Kryptonite and Juicy.

Moko racked up over 100,000 streams on his first entry into the playlist with 1 Time in 2020, which placed him in one of the top 150 streamed artists despite his music only being available for the first time on Spotify in that same year.

Who We Be has become a brand in its own right, with an accompanying podcast Who We Be Talks hosted Henrie and Harry Pinero. Each week they discuss artists, music, issues and news at the heart of black culture.