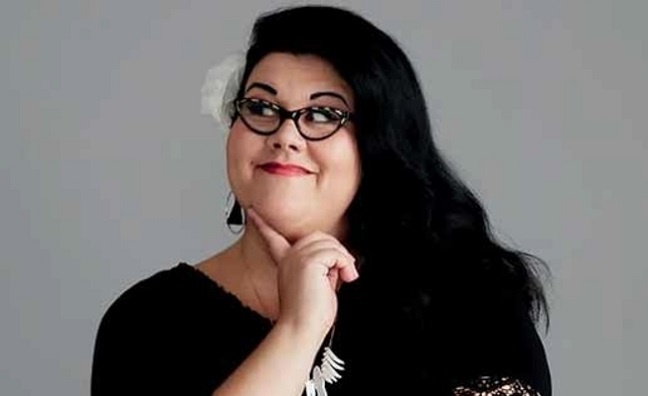 Born in New Jersey before relocating to London aged 21, Amy Lamé has made a career of championing music. From her first job working in a Soho cafe bar she was soon running things herself, and her acclaimed night Duckie is still going strong after 23 years on Saturdays at the Royal Vauxhall Tavern.

Recently, she’s started championing music on air, sharing her favourite records with BBC Radio 6 Music’s listeners on Sunday afternoons, while since 2016 she’s been fighting the cause for London’s nighttime economy on behalf of Mayor Sadiq Khan in her role as Night Czar. That’s why she’s winner of Music Champion at the 2018 Music Week’s Women In Music Awards.

How does it feel to be a Music Champion?
“I feel so honoured. It took me by surprise. I have just been getting on with the job. The fact that someone else has recognised it is very sweet.”

You champion music, but can you make it?
“It’s been funny getting the award because I’ve been a frustrated musician my entire life! When you want to play but you can’t it channels your energy to music in a different way.”

Did you have a mentor or role model early on?
“There are people that have always inspired me. Someone like [actor, singer and drag performer] Divine, who is a performer and a musician, kind of like a crazy night club. I’ve always loved that kind of crossover and culture club. I’ve never met Divine and God knows what a mentoring session with Divine would have been like.”

How has your Night Czar role allowed you to push music forward?
“I’ve really been able to take my passion and dedication for music to a different level. The mayor and I drove forward the Metropolitan Police’s review of Form 696 [which required venues to specify the type of genres they were hosting], which they scrapped. It was a proud moment because I know how damaging it was to the music scene here in London. I’ve also been able to help over 70 music venues to survive. My powers are limited but I have a convening power.”

You get conflicting parties together?
“Bringing people together who are usually on opposite sides of the page. When I became Night Czar there was a situation around Fabric where there was a lot of stoic attitudes: ‘Us against them.’ You need to knock down those attitudes of the past.”

Any particular venues that you’re proud to have helped?
“There is The 100 Club, which will always be near to my heart. Jeff [Horton], who runs it, is just an amazing person. He inspires me to keep going. There are venues like The Scala in Kings Cross, I helped them on a planning issue.”

You work a lot with the live sector as Czar and as a promoter. How do you find the live industry?
“How long have you got? [laughs] Look, being a woman, running a club night, being a DJ, being a broadcaster I say, ‘I’m not bossy, I am the boss!’ It’s hard for men and it’s hard for me as a woman, because men don’t want to listen to me sometimes, and it’s difficult for me to be in situations where I’m being told things like, ‘When the DJ turns up tell him this’ and I am the DJ! It’s things like that that you just think, ‘Oh my God, this is 2018!’ It can be challenging but I think as a woman it’s important that I stand up for that. Also, I want to reiterate how important it is for men to stand up too and be allies for women in this. Just think about it, you’ve got daughters or sisters who want to grow up and survive in this industry, you want it to be safe for them. Help us make it safe now.”

Is Night Czar an official title or a nickname?
“That is my official title. Some people think I have a superhero costume that I change into [laughs] or that I just party all night but it’s not true. I work all day in City Hall and then usually I work at night as well. A lot of the work that I do, I can’t shout about. I can understand why certain businesses or music venues might not want their case to be spoken about in public and that’s fair enough. Before my role existed, there were a lot of issues that had just been swept under the carpet, so people were desperate for help. The first two years have been dealing with a lot of issues that have been hanging over for a long time. We had lost 35% of our grassroots live music venues but we’ve been able to stabilise that. We have not gained but we have not lost. It’s the same thing for LGBT venues. London lost 61% of its LGBT venues in the past 10 years. So that’s a whole thing trying to steady that ship and stop those closures. Then slowly turn the ship around towards growth. It is a big job.”

Do you ever give the mayor musical recommendations?
“He’s got brilliant musical taste. He loves Paul Weller, he’s mod. Whenever I see him in his casual gear, he’s always wearing a little Fred Perry top.”

Has your BBC Radio 6 Music show allowed you to champion music?
“It’s a gift, it’s wonderful and I get to talk all of that passion and knowledge that I have. I do make a clear distinction, I don’t talk about my Night Czar work on air, I don’t feel like it’s the right thing to do, but it has meant that I’ve been able to bring some of that knowledge around the importance of grassroots music. Spreading the word about so many great artists that are doing what they do, often on a shoestring.”

Finally, any advice for women looking to make it in the music industry?
“I would just say, just do it, persevere and don’t stop. We need mutual support and love. I’ve met so many amazing women in the industry that have been so supportive of me and that’s what gets us through.”