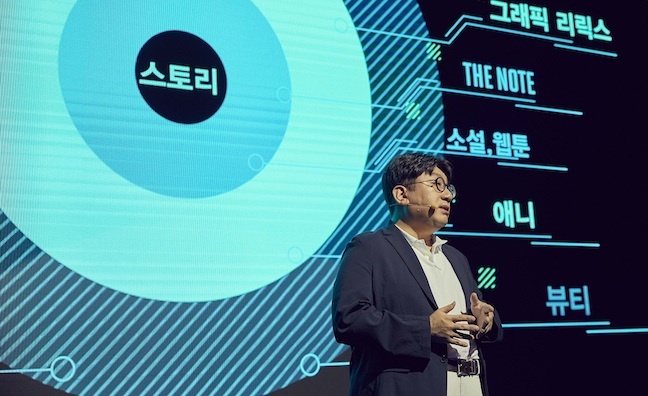 Big Hit Entertainment recorded an operating profit of 39.1 billion KRW (£139mil GBP) in the first half of 2019, the South Korean music production, artist management and publisher behind the likes of BTS has announced.

Confirming that they had generated revenues of 200.1 billion KRW in the first six months of the year, the company's CEO Bang Si-Hyuk (pictured) outlined the business' on-going vision at an industry briefing held at the Korea Textile Center earlier today (August 21)

“Big Hit seeks to spur on change in the process of value creation and expansion in the music industry, which will boost revenues, expand the market, and advance the system, and ultimately enhance the quality of life for all employees and all members of the music community,” he explained.

Part of this "change" are plans to develop a new "drama production based on BTS universe" which will premier in 2020, plus a game based on the South Korean band will also be developed in collaboration with Netmarble.

The briefing also heard from a series of Big Hit executives who outlined several other innovations they said would help the firm achieve its ambitions.

CEO of Big Hit’s business contents, Lenzo Yoon, revealed how they were aiming to deliver an "expansion of concert experience", explaining: “Big Hit is committed to turning the hosting city of a concert into a festival, improving inconvenient and unfair elements and enhancing the overall customer experience.”

“It will be a ‘one-stop service in the music industry’ that can provide any music services by turning on Weverse and Weply," CEO Steve Seo of Benx, a subsidiary of Big Hit told the briefing.

"The entire process will be integrated for our customers, from ticket purchase to identity verification, special event participation, and merchandise shopping.”

Earlier this year BTS smashed merch sales records at The O2, while in February Maverick Management announced it had recruited Eshy Gazit who had worked with BTS in America.