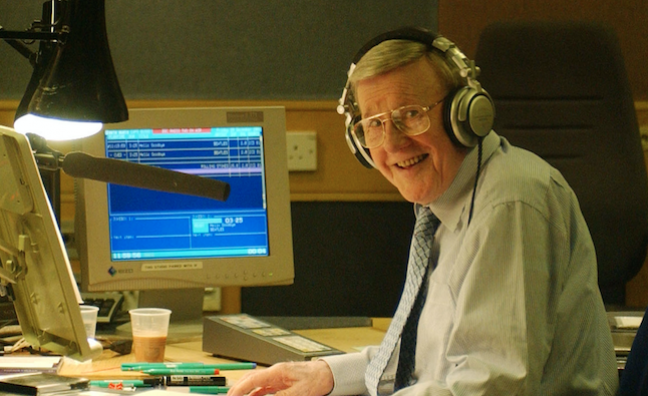 The industry has been paying tribute to the late DJ Sir Jimmy Young, who passed away on Monday at the age of 95.

Having spent almost 30 years at BBC Radio 2, Young became one of BBC Radio’s most iconic and best-loved voices.

He left the station in acrimonious circumstances in 2002 when he was ousted as part of controller Jim Moir’s plan to draw more youthful audience. He did, however, make his peace with the station five years ago, hosting a one-off programme to celebrate his 90th birthday.

Prior to becoming a broadcaster, he released a number of singles in the 1950s, among them a cover of Nat King Cole’s Too Young and The Righteous Brothers’ Unchained Melody.

Radio 2 will broadcast a special programme on Wednesday night from 11pm - midnight, presented by Ken Bruce.  The show will be an updated version of the 90th birthday tribute to Jimmy, originally broadcast in 2011. There will also be memories of Jimmy in the Jeremy Vine show on Tuesday from midday.

The first hour of Jeremy’s show was devoted to Jimmy so it’s worth listening back if you want more words.

"He was a truly unique broadcaster who pioneered a form of presenting that generations have followed,” said BBC Radio director Bob Shennan. "He made current affairs relevant to millions of listeners and helped shape Radio 2 into the station it is today."

Broadcaster Tony Blackburn also paid tribute in a statement, which said: "Jimmy was a legendary broadcaster, there at the very start of Radio 1 and then, for so long, the voice of Radio 2. 2016 has been a terrible year for losing iconic figures from our youth. Today we lost another."

BBC director general Tony Hall said: "Sir Jimmy Young defined Radio 2 and was a true broadcasting pioneer. He will be dearly missed by his many fans."

Young’s former Radio 2 colleague Bruce tweeted: "So very sad to hear about the death of my old friend Sir Jimmy Young. One of the most able broadcasters I ever worked with."

A family spokesperson stated that Young died “peacefully at home” with his Alicia by his side.