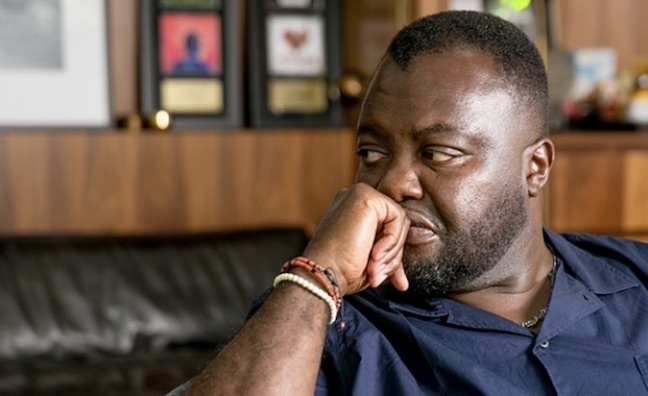 Stellar Songs co-founder Danny D has spoken to Music Week about streaming, Stargate and his bid to effect positive change at the top of the music business.

Los Angeles-based Danny D has more than three decades of experience spanning all facets of the industry including as an artist, remixer, A&R, label owner and producer. Alongside his Tim & Danny Music partner Tim Blacksmith, he formed leading publishing company Stellar Songs, which represents the works of Sam Smith, Charli XCX and Emeli Sande, among others.

The pair also co-manage Norwegian songwriting and production powerhouse Stargate, the team behind hits for the likes of Rihanna, Britney Spears, Beyonce and Katy Perry.

Real name Daniel Poku, Danny D is running for election for the PRS Members’ Council. The results of the ballot will be announced at the PRS annual general meeting on May 19.

“Creators have always come in diverse shapes, colours and sizes, but have never been adequately represented where music business decisions are made,” said Danny D, as part of his manifesto. “Moreover, I believe that my insights and experiences of operating as a black Brit for the last two decades in the world’s biggest market, the USA is both timely and crucially important – especially given that, as a black group of companies, we represent creators of global repute in that racially complex environment.

“I would like our community of writers and publishers to be seen increasingly as champions of change and for the industry to grow healthier for them in the longer term.”

To discuss his plans and a whole lot more, we joined Danny D over Zoom for a career-spanning Q&A…

What’s keeping you busy at the moment?

“The main focus these days is my publishing venture with Tim Blacksmith – Stellar Songs – and Stargate, the production team we've managed for a good 20 years. We have had a great influx of youth into the company, which I'm finding invigorating. You need that youth to give you today's point of view. Even if I think, ‘I've heard that before, we had that 15 years ago,’ they're giving you the reason why it's hot now and I love that. But the biggest plus of all is imparting everything we've learned on our long-ass journey and being able to give back.”

How did you get involved with Stargate?

“It was Tim who came across them and introduced them to me. I showed up in Trondheim, Norway, and what got me was their set-up, their professionalism and how nice they were as people. But over and above everything was their talent. They were very inquisitive – you felt their level of ambition straight away. If my memory serves me right, they were running a jingles company and had become very successful in doing that. You could tell that, when they got into something, they got into it hardcore. When you want to succeed, your work ethic has got to be up there and they had that from day one – with bundles of talent on top.”

What’s the story behind Stellar Songs?

“We were doing so much with Stargate and were coming across all this young, fresh talent that most of the majors weren't across. We were meeting them so early because we were in that creative process and it was like, ‘We should be investing in these kids.’ We wished that we had people that had invested in us and showed us the ropes when we started. I mean, I was fortunate. I had a couple of hits and got a publishing deal and I saw how that opened doors and introduced me to people. But I thought to myself, ‘What if I’d had that before I had the hits? What would I have gone on and done?’ So we wanted to open the door for others who were just like ourselves.”

For me, this is about giving back everything that I've learned from this game

What path do you think your career would have taken if you hadn’t met Tim?

“Ah, good question. I think I would have continued as a producer – that's what I set out to be. But what I found in Tim was a likeminded person who was ambitious. I always looked at what Motown had achieved and was thought, ‘Where's our Motown?’ And from our first conversation, it was pretty obvious we were thinking along the same lines. Even though we were coming from slightly different sides of the fence, there was synergy there – our home lives, our experiences and our ambitions were all very similar.”

How would you compare the UK and US music businesses?

“They are similar, but there is a camaraderie that I find over here [in the US]. Others saw what we were doing and wanted to link with Tim and I and the Stargate guys, and we saw the benefits of doing that. Jay-Z and Roc Nation were the first [forming the StarRoc label in 2008] and that’s something I would love to see more of in the UK. I feel in the UK there are many who are sitting on their own islands when actually, no, let's join together. That’s the big difference between the two from what I’ve experienced.”

Have you always had a mind for the business?

“That's definitely something that developed over time. I came to this thing as a DJ and it took someone to come up to me while I was DJing to tell me, ‘There's a bunch of guys standing to your left – and you're doing their jobs for them.’ I was working at this club called Gulliver’s, which was one of the hotspots in London at the time. There was a night called the Roots Party Night, which was the hottest night in town, so the club promotion guys would literally hand me their tunes and I would test them, not knowing that the next day they were in their offices going, ‘The tune went off last night.’ And I was like, ‘Is that a job?’ And that was my introduction.”

What made you put yourself forward for the PRS Members’ Council?

“I'll tell you the honest truth – we were actually putting Tim up for it, but it transpired that he didn't qualify under the present PRS rules. So then it was like, ‘OK, well I qualify…’ But the thing that really geed me up was to hear that there weren't any black males on the board – especially in a time where black musicians are across literally everything. That's just not right and we need to change that. People like myself and Tim and many others who have done well in this industry need to stand up and be counted, so that we can represent our youth who are coming through.”

Why do you feel that lack of representation at executive level is still prevalent across the industry in 2021?

“If I answered that question, we'd be here for a long time. Also, I think I might come across as the angry black man. I'm not the angry black man, I'm the frustrated black man. It's gone on for too long. Events over the past couple of years have changed people's mindsets, so let's move forward and do the right thing for all. We have been unrepresented. Now, we need to listen to our kids' thoughts and needs and have that represented at board level - and make whatever changes need to be made to make it a better place for all. I want to be part of that.”

What would be your biggest priorities if elected?

“I have realised that a lot of the youth have absolutely no idea of what PRS is. And not just PRS – many of the other establishments. Someone coming into the industry needs to know where to go to get some help and be advised and it needs a different approach, so that these kids are coming to this thing way earlier than they are – because it seems like they only get introduced once they’ve had a hit. I'm not saying that that's how it is, but that's how it comes across and that's got to change. It's important that kids come into the game knowing that PRS is there for them.”

What’s your take on the streaming debate?

“That's a battle and a half. Let's be straight here, what industry do we have without the songwriter? We haven't got one. Without those songs, we’ve got nish. And yet the songwriter isn't being rewarded in the way the songwriter should be rewarded. That’s wrong, and we’ve got to look at it and make [the business] a better place for songwriters.”

If elected, what would you hope to have achieved by the end of your term?

“For me, this is about giving back everything that I've learned from this game. If I can help three people, then I've done my job. If I've been able to effect some form of change, I'm good with that. If it's ground zero, then I've totally messed up and it will have been a waste of time, but I'll go in to fight for the next generation, that's for sure. Let’s open the door for them, let's get that engagement going.”