Are Easy Life the first big breakthrough act of 2020? 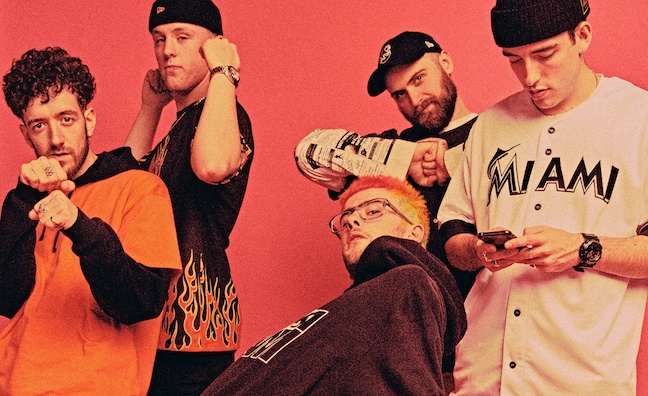 If 2019 was a good year for UK breakthroughs, there are already encouraging signs in 2020.

Polydor-signed Celeste has apparently united the industry in viewing her as a potentially huge artist. She picked up both the BBC Sound Of 2020 and BRITs Rising Star award, which means she gets to perform at the ceremony on ITV next month.

Joy Crookes, Beabadoobee, Yungblud, Inhaler and Squid are also tipped for success in the next 12 months.

But the first tangible breakthrough of 2020 is set to be Leicester band Easy Life. The group with an eclectic sound, including hip-hop, jazz and indie, are pushing for a Top 5 opening in the albums chart today (January 17) with mixtape Easy Life. In the Midweek chart, the record had already moved 5,391 copies.

Based on early sales flashes, Easy Life were doing even better before all the streaming data had been factored in.

“We had 48 hours at No.1 and I was just telling everyone, it was the best feeling ever,” frontman Murray Matravers told Music Week. “It is mental to be honest. The artwork is so funny as well, because everyone’s is so serious and ours is very tongue and cheek. It’s quite funny it’s getting that exposure.”

Island president Louis Bloom has been raving about the band in recent months. So could they be another one of the label’s greats?

“The first time I saw the five lads play at their rehearsal space in a Leicester industrial estate, it was obvious they were all artistic, singular talents, and that the world would find the next unlikely pop star in lead singer Murray,” Bloom told Music Week. “Being named runners up in the BBC Sound Of 2020, and in the same week releasing their Junk Food mixtape, is just the start for an act who will define Island Records.”

He added: “What attracts me to Dermot Kennedy and Post Malone is that they’re cross-genre, and Easy Life are again a cross-genre act [for Island].”

While you might expect a label boss to enthuse about his big hopes for the year ahead, Easy Life have already established a strong foothold. The band sold out a tour with 10,000 tickets last autumn.

Impressively, they were also the subject of a US bidding war within the Universal system. Ultimately, Interscope won out.

Easy Life have more than a million monthly Spotify listeners, though Matravers noted that physical sales were powering their chart performance in week one.

“We don’t actually get that much streaming relative to everyone else in the album charts, we just sold loads of vinyl,” he said. “So it’s not just about streaming necessarily, it’s a good platform – you can use it to your advantage and you can release a lot of music via those platforms.

“I don’t think there’s a model now, the music industry is changing so rapidly that you have to adapt with it. It seems to be a bit of a jungle at the minute and there are many routes to market.”

The label and band will find out later on Friday (January 17) just how big their breakthrough is.