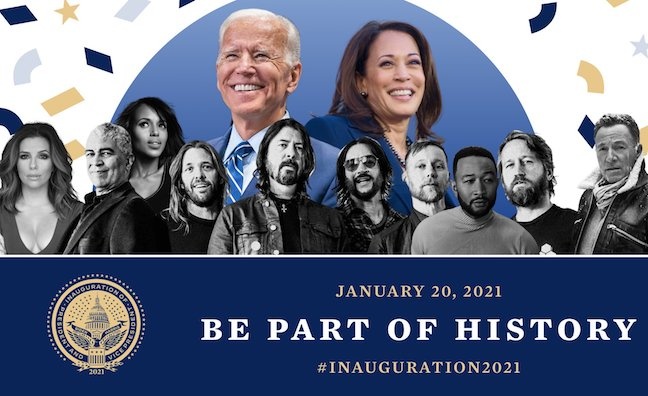 Glassnote founder/president Daniel Glass has spoken to Music Week about his hopes for music creators under the Biden administration.

The Presidential inauguration takes place today (January 20) with Lady Gaga set to sing the National Anthem at the swearing-in ceremony, where Jennifer Lopez will also perform.

Glass said he was also happy to see the latest line-up of performers for the Celebrating America special, including Foo Fighters, John Legend, Demi Lovato, Justin Timberlake, Tim McGraw, Jon Bon Jovi, Black Pumas and Bruce Springsteen. As well as being broadcast live on US TV networks from 8.30pm ET, it will be streamed live on YouTube, Facebook, Twitter, Twitch and Amazon Prime Video.

“I was very encouraged and hopeful when I learnt of some of the exciting plans for the Presidential inauguration festivities,” said Daniel Glass. He also welcomed the line-up of artists for the postponed Kennedy Center Honors event in May, including Joan Baez, Garth Brooks and violinist Midori.

“To see so many musical artists already involved is a sign and a nod of respect to the next four years,” said Glass. “When you think of the Kennedy, Reagan, Clinton and Obama administrations, they are equated with seminal and memorable musical highlights in the White House, parades, balls and concerts. Musical culture is an American treasure and vital export which must be coveted and put on display at every opportunity.”

During the inauguration of Barack Obama in 2009, performers included Aretha Franklin and Beyoncé. In his memoir, A Promised Land, Obama recalled the “sublime rendition of At Last” sung by Beyoncé.

At his 2013 inauguration in 2013, Kelly Clarkson and Jennifer Hudson were among the artists, while Beyoncé returned to sing the national anthem.

Mumford & Sons, signed to Glassnote in the US, performed for President Obama and then UK Prime Minister David Cameron at a White House state dinner in 2012.

I recommended that our country dearly needs a Minister of Culture who would oversee music, theatre, film and television

After four years of Donald Trump, during which artists steered clear of the White House and there was no obvious support for music from government, Glass is hopeful of a new era for the industry under President Biden.

“We will see a change of tone on January 20,” Glass told Music Week. “It will be a positive one and the soundtrack will be music, a welcome sound and sign of the things to come.”

The incoming Biden administration also has implications for UK music, copyright and exports in the streaming era.

President Biden and Vice-President Kamala Harris will speak during the TV special tonight, covering issues such as diversity and talent.

As previously reported in Music Week, Glass had long tipped Harris to be a major force in US politics. He has been a supporter and friend of the Vice-President-elect, who served as US senator from California from 2017. There are now hopes that the US could follow the European model by instituting a Culture Department.

“I recently joined Vice-President-elect Harris and her husband, Doug [Emhoff], on a Zoom, where I recommended that our country dearly needs a Minister of Culture who would oversee music, theatre, film and television,” said Glass.

“All of the years I have known Kamala Harris, she has shown her enthusiasm and knowledge of musical artists. Coming from California with so many creative industries, I know she will fight to protect the rights of the creators.”

Glass suggested that the next Democrat Senate majority leader, Chuck Schumer, will also be a voice for artists and music creators in the US.

“Knowing him from Brooklyn, he is a huge fan of clubs and venues especially in NYC,” said Glass.