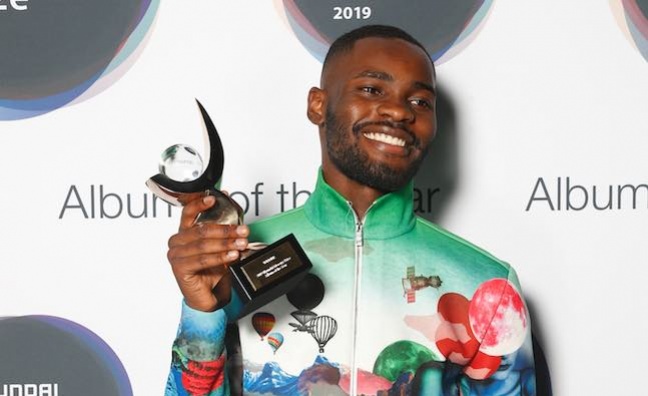 Dave has won the 2019 Hyundai Mercury Prize with the album Psychodrama (Dave Neighbourhood/Universal Music). It has sales to date of 129,354, according to the Official Charts Company.

Judge Annie Mac said the record showed "courage and honesty". The rapper (Dave Omoregie) invited his mother on stage for an emotional embrace and described how his imprisoned brother, Christopher, inspired the record.

The ceremony organised by the BPI was staged at the Eventim Apollo and featured live performances from all of the nominees, apart from The 1975 who had tour commitments. It was broadcast on BBC 6 Music and screened on BBC Four.

It was a wide-ranging and well-received show, with incendiary performances from Black Midi, Idles and Slowthai, who finished by throwing a rubber Boris Johnson head across the stage and shouting "Fuck, Boris Johnson, fuck everything".

Foals opened the show with a storming rendition On The Luna, though a hand injury meant that frontman Yannis Philippakis was unable to play guitar. The Maccabees' Felix White stepped in for the show.

Awards presenter Lauren Laverne said that this year's albums "reflect many of the issues dominating the headlines in recent times". It was one of the most open awards for some time, with no emerging consensus on the night about who was likely to emerge victorious. In the event, the judges returned to the frontrunner at the time of the nominations.

The industry will now look to see how the win impacts sales and streaming for the winning record by Dave. Artists to benefit from the nominations include Black Midi, Slowthai, Anna Calvi and Fontaines DC. Amazon Music supported the 12 releases as digital partner.

Click here to read an insight on the judging process from this year's panel.