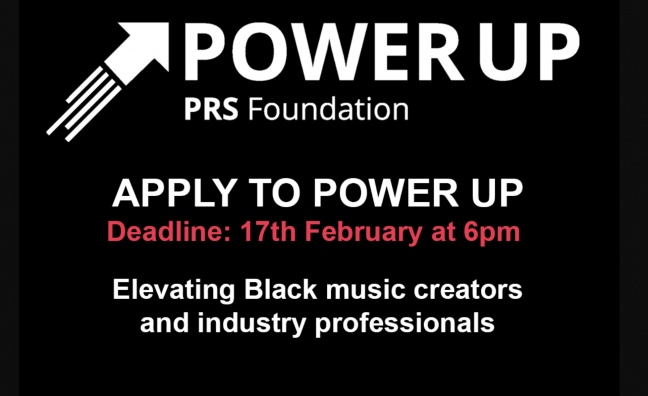 Power Up has today announced the opening of its Year 2 participant programme application process.

The initiative is designed to elevate exciting Black music creators and industry professionals by addressing barriers for those at crucial career stages. It has already transformed the careers of 40 Year 1 participants.

Alongside the second year of the programme launch, there were further calls for the major labels to back the initiative.

Applications are now open for the Year 2 programme, with the deadline set for Thursday February 17, 2022 at 6pm. Successful applicants will be announced in April 2022.

Power Up aims to break down barriers to create a fairer, more equitable music industry, to achieve better representation in all sectors of the UK music industry, and to amplify the work of Black creators and industry professionals.

Each year the Participant Programme supports:

• 20 Black music creators (artists, songwriters, composers and producers who are involved in the creative process and may be working in any genre, based anywhere in the UK)

• 20 Black executives and industry professionals (professionals working in any sector of the music industry, anywhere in the UK - including employees and entrepreneurs, freelancers and self-employed professionals).

• Taking part in the long-term Power Up network

• In person and digital meet-ups

Since the participant programme launched in April 2021, the Year 1 cohort of 40 Power Up participants have built a network of support, learning and impact with two capacity building workshop sessions per month and 40 mentoring pairings in partnership with SheSaid.So.

Award nominations, wins and recognition for the first year creator participants include Jennifer John (Local Hero Award at the AIM Awards); Ego Ella May (Vocalist of the Year at the Jazz FM Awards); Laura Lewis-Paul, Eunice Obianagha and Christine Osazuma were recognised on the She Said.So Alt List 2021; Hannah Shogbola was added to the Music Week Women in Music Awards Roll of Honour.

New roles and promotions for Power Up participants include: Christine Osazuwa became strategy director at Pollen; Despa Robinson joined the AIM board; and Daniel Kidane was elected to the Ivors Academy Senate.

New ventures include: Errol Anderson curated performances at the White Cube Gallery as part of Frieze Festival; Adem Holness curated the 696 Festival at the Horniman Museum; Loretta Andrews launched the I Am Independent Bootcamp Video course as a resource for independent artists; Kwame Daniels started his own BBC Radio Ulster show; KG now has a Capital show; and Abel Selaocoe had a three-part show on BBC Radio 3 titled Cello Retold.

It’s been amazing to see the positive impact and outcomes

Yaw Owusu, senior Power Up manager at PRS Foundation, said: “It’s been amazing to see the positive impact and outcomes of the inaugural Power Up participant programme on the careers and activities of the cohort. It has been so fulfilling to see measurable change - whether that has been the exchange of essential information and ideas, projects and ambitions being fulfilled, support and inspiration being shared, or new networks and work being created.

“We are grateful for the support of our partners, the execution from all of our guest facilitators, as well as the guidance of our Executive Steering Committee. It has been so valuable and has ensured the programme delivered has been of a high standard. We look forward to building on the positives and working with our Year 1 participants and existing partners - and hopefully some new ones - to make sure we continue to offer a transformative programme for this incoming cohort. We are all very much looking forward to the next stage.”

Nick Eziefula, Power Up industry professional participant, said: “Since getting involved in Power Up, my profile within the industry has been raised, my network has grown and I've had a steady stream of great new clients. I've learned from some of the best in the business and have also been able to give my fellow black creatives and professionals the legal support they need to thrive. It's been a deeply fulfilling and worthwhile experience.”

Hannah Shogbola, Power Up industry professional participant, said: “Power Up is incredible… I never thought there’d be a community of people we can relate to. We’re all Black and that’s amazing.  We were all seeing corporations saying things but Power Up decided what it wanted to do and set it up and it’s changing things.”

Co-founded by PRS Foundation and Ben Wynter, the strategic direction for Power Up is guided by an Executive Steering Group (ESC), featuring some of the most influential Black professionals in the UK music industry.

Other supporters include Creative Scotland, Believe, Simkins plus AIM, the BPI, the FAC, The Ivors Academy, the MMF, the MPA, MPG, The Musicians’ Union, PPL, PRS For Music and the PRS Members’ Fund, as well as associate partner Shout4.

Ben Wynter, Power Up co-founder, said: “When creating Power Up, our vision was for the initiative to move the needle on anti-Black behaviour within the UK music industry and provide a platform with resources for the plethora of Black talent within the business to push through the glass ceiling to the next level. The success of the Year 1 participant programme is vindication of the hard work that has gone into the delivery and execution of this effective initiative and a huge statement to those doubting the need for Power Up to exist and an agent for change. It is already moving the needle for Black talent in the music industry as demonstrated in the participants’ successes.

“My desire from day one was for Power Up to be the bridge between those that posted black squares and the Black talent in the business, to facilitate better dialogue for those companies that wanted to do better but didn’t know how to and break down the unspoken barriers that exist. I believe that we are succeeding in building these bridges through the participant programme and will go even further in Year 2 with the Power Up Movement. Whilst there is still a long way to go, I hope that more organisations will engage with Power UP and as a result, our participants will lead the vanguard as they take huge personal steps and make giant leaps of change within the industry, filling roles and occupying new spaces within the business.”

Sheniece Charway, artist relations manager at YouTube Music and Power Up Ambassador, said: "I'm so honoured to continue to play my role as an ambassador for Power Up for its second year. The initiative has been so vital for the industry and helping artists and executives realise their dreams and goals. Power Up aligns perfectly with the work we do at YouTube to support Black excellence through our Black Voices Fund and Legacy Series, and I can’t wait to see what candidates we collectively champion and elevate as an industry this year."

Tom Connaughton, managing director, Spotify UK/IE, said: “We’ve been delighted to be involved and really happy with the success of the Year 1 cohort of Power Up participants. We're looking forward to continuing this important work with PRS Foundation to create paths for further equity in the UK music industry.”

Sheryl Nwosu, lawyer & chair of the Black Music Coalition, said: “I don’t think it’s at all hyperbole to say that the first year of the Power Up programme has been an amazing success for both the participants, and also of itself, for its innovation as a vehicle for change. The successes of the participants and their feedback speaks for itself, and it has been immensely satisfying to watch those successes and see aims of the programme being fulfilled; the combined brilliance of the first year’s cohort shows and proves that by actively challenging and removing barriers imposed due to direct and indirect and systemic racism, Black talent and excellence will rise to the top. The Black Music Coalition is proud to continue as a partner to the Programme and looks forward to lending its support to the soon to be selected, undoubtedly excellent, second cohort of Black talent!”

Paul Redding, CEO of Beggars Group, said: “Since the launch of the programme we have continued to be impressed by its roll-out and the achievements of Participants during this inaugural year. We have learnt a lot and will continue to support in any way we can as we move into the second year and look forward to welcoming new partners and delivering real, long-lasting change for our industry.”

Joe Frankland, CEO, PRS Foundation, added: “It’s hard to overstate the impact of selecting and supporting a network of 40 inspirational Black creators and professionals, and I feel very lucky to have witnessed the ways in which our first cohort are shaping the future of the music industry in all areas. We look forward to seeing who puts themselves forward for this transformational opportunity for Year 2 and would like to thank the many funding and delivery partners whose commitment made all of this possible.

“It’s now impossible for the sector to ignore bigger picture data and first-hand accounts of racism in all parts of the music industry. Through Power Up we are offering solutions that have huge real-world impact for participants and the wider sector. In 2022, I want to see more companies stepping up - including the majors and other large companies. We should all be working together to achieve even greater impact.”