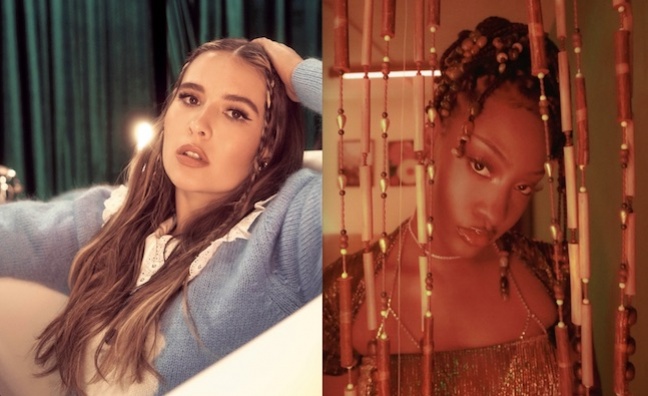 Last month Music Week revealed that RCA was the No.1 UK label in 2021 based on market share.

The Sony Music company made an impact with international acts including Lil Nas X, The Kid Laroi and Doja Cat (signed to the Ministry Of Sound label), as well as homegrown talent such as Bring Me The Horizon and Little Mix.

Webb - a Music Week cover star - is on tour this month, including a date at O2 Shepherd’s Bush Empire. Tems, who’s signed to Since ’93 as part of a joint UK and US deal with RCA, has confirmed shows at Koko in June and as part of the Somerset House series.

Stacey Tang: “Her numbers are phenomenal. She’s done a million singles in the UK. She had two Top 15 singles [before] having an album out. But it is all to do with scheduling, and you can't do that if all of your records are on top of one another.”

David Dollimore: “First and foremost, the music was exceptional. She worked out how to market and build an audience on TikTok. She was busy doing that through lockdown and teasing songs, and obviously we had a big presave going with that. Mimi Webb really understands her audience. It's great that Stacey and I can now go and see her play live, and see this young audience screaming to every song. It's quite mad to see that, considering how few records she's actually put out. She’s already had a million record sales, a Top 10  EP, she's brilliant and very hard-working. She knows what she needs to do as an artist, she just writes great songs and she understands her audience.”

ST: “She's actually really good at knowing what to say no to. Sometimes that can be frustrating at a label, because she has a really young audience. But we’re trying to grow outside of that, because different audiences turn on at different times. So we may do a daytime TV, but that will be in conjunction with something on TikTok as well.”

What are your ambitions for both Mimi Webb and Tems?

DD: “They're going to be global superstars. With the momentum behind those two, knowing what Tems has got to come, knowing where we’re at with Mimi, they’re certainly the key priorities for breaking globally. Tems has been here doing shows and you can't get away from the chatter and people talking about her. She came out with Wizkid at the O2 dates. We're really happy for the team and those artists obviously being picked to be in the longlist for the BBC Sound poll [Webb also made the shortlist]. I think Mimi and Tems both have the ability to sell a lot records around the world.”

Mimi Webb and Tems are the key priorities for breaking globally

Will there be albums from those artists in 2022?

DD: “Tems is here recording new music, so on the trajectory right now, I'd say yes.”

ST: “There isn’t a date yet for Mimi Webb, she’s still recording.”

What about the live plot, including touring activity for Mimi Webb?

ST: “Live shows are coming in for her, so it's good for us to strategise around those pieces that sit outside of solely releasing tracks. Her fanbase have been great at coming to the party when we’ve asked them to do stuff. In the week of release [of her EP], she was doing a lot of in-stores and, because she's done all of her work mostly on lockdown, people are actually used to seeing her in 2D. So it’s exciting to see the fanbase singing along to everything.

“Tems has sold out two Koko dates, she's got a load of other dates coming in already. When we put the Lafayettes on sale, they sold really fast - they went in a matter of minutes. Birmingham took a little longer. With the MOBOs, it's very rare to see somebody come out and do their first performance at an industry gig - even if the vibe is good - and look as polished as her but as natural at the same time. So I'm excited to see what the production looks like next year.”

Subscribers can read more from RCA on their 2021 market shares triumph here.