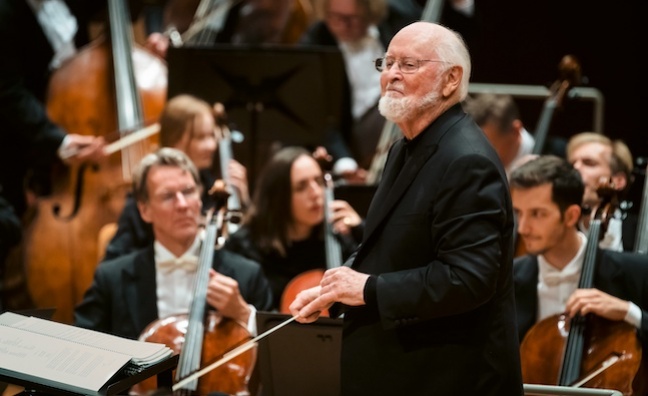 In his 90th birthday week, legendary composer John Williams has landed a No.1 album.

The Berlin Concert recording has topped the main albums chart in Germany, where it opened ahead of new albums from Korn, British metal veterans Saxon (at No.3, their highest position to date in Germany) and ABBA’s Voyage.

The album is at No.2 on the combined classical chart in the UK.

The Berlin Concert captures the composer’s debut conducting with the Berlin Philharmonic last year. It features many of his best loved film themes from Star Wars, Raiders Of The Lost Ark, Superman, ET, Jurassic Park, Close Encounters Of The Third Kind and Harry Potter.

As well as a first German No.1 for the American composer, it also marks the first time the Berlin Philharmonic has hit the top spot in the country’s Top 100 Album Chart, which is compiled by GfK Entertainment. Germany is the world’s fourth largest recorded music market, behind the US, Japan and UK.

The chart success builds on that of John Williams In Vienna, which was the best-selling orchestral album of 2020 in and reached No.6 in the  charts this time last year.

Dr Clemens Trautmann, president, Deutsche Grammophon, said: “We are thrilled that John Williams’ 90th birthday has been crowned with this chart success. The top ranking of all new albums in Germany clearly reflects the exceptional place his peerless music has long held in our collective memory and, more importantly, in our hearts.

“All of us at Deutsche Grammophon are honoured that John Williams has entrusted us with his recordings with such leading orchestras as the Berlin Philharmonic, Vienna Philharmonic and Boston Symphony Orchestra – and, of course, with Anne-Sophie Mutter. It has been a joy to work together on these historic projects.”

Frank Briegmann, chairman & CEO Universal Music Central Europe and Deutsche Grammophon, said: “With this first No.1 album in the Official German Charts, John Williams – together with the Berlin Philharmonic – has given himself a wonderful birthday present and the rest of us a sensational listening experience. My warmest congratulations to John, the Berlin Philharmonic and the whole team, including our media partner Seven.One Starwatch.”

At 90, John Williams continues to write for both the screen and the concert hall.

In March, he returns to Vienna to conduct the Wiener Philharmonic Orchestra at the Musikverein. As well as favourite film themes, the programme will include his Violin Concerto No.2, with soloist Anne-Sophie Mutter, whose world premiere recording of the work is set to be released by Deutsche Grammophon later this year.