Independents' day: How the AIM Awards will mark indie achievements in the pandemic year 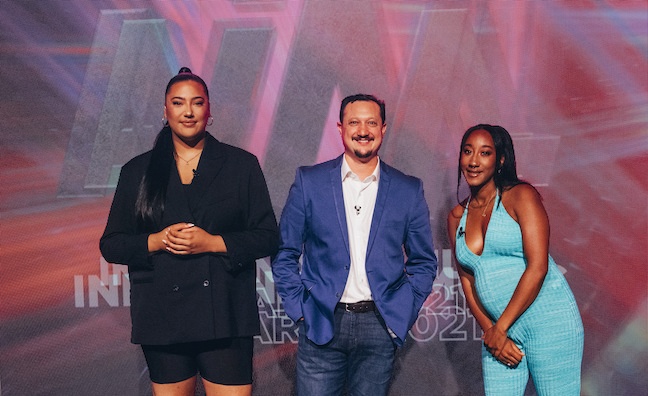 The AIM Awards is set to celebrate the independent label sector’s triumphs in a challenging year.

The livestream of the ceremony is available to watch here from 8pm on August 25.

Because of the pandemic, the awards were reinvented last year as a cutting-edge virtual ceremony. The acclaimed livestream, which utilised AR, VR and XR, featured the likes of Music Week cover star Little Simz and AJ Tracey.

“There was no way we couldn’t have done it,” Paul Pacifico told Music Week. “We needed a moment to come together, raise a glass and just say, ‘We have done some amazing stuff this year, in spite of everything.’ We felt a massive sense of responsibility to make that happen and do something excellent. And we really did go the extra mile.”

This year’s edition, which has a 12-month eligibility period up to May 2021, will mark the indies’ amazing achievements during a full year coping with the pandemic.

Based on Official Charts Company data for the first six months of 2021, Music Week can reveal that the indies have increased their market share compared to the same period in 2020.

For the All Music AES metric, the independent sector has gone from a 25.8% market share for the first half of 2020 to 27.2% in the same period this year.

Track streams have also increased for independent labels over the same period - up from 24.6% to a 25.9% market share. Meanwhile, indies have capitalised on the booming vinyl market, with All Album Sales up from a 32.1% market share in the first six months of last year to 35.7% in 2021.

In 2020, the full year All Music AES market share for indies was up to 26%, while the independent sector had a 35% share of the vinyl market.

Pacifico, who’s coming up to five years in the role, said the independent music business is in a healthy state.

“It’s really strong,” he said. “The independent market share in the UK has grown by roughly one percentage point a year in the time that I’ve been at AIM and that is testament to the fact that, no matter what is going on in the industry, independent businesses continue to grow.

“I see AIM as a hub for entrepreneurship, built on three pillars that we call the ABC of independence: activism, business and community. All of the challenges around us in social justice and the environment are deeply embedded into the practice of being in the independent community. That provides a massive sense of strength and connectedness.”

“We’ve got an exciting year ahead of new releases and new artists coming through,” said Rackham. “There’s also a big focus on catalogue, which I think has been a big lesson. During 2020, with the interruption in recording schedules and release schedules, we have been mining catalogue and working catalogue efficiently. I think we'll see more of that over the coming year.”

Collapsed In Sunbeams, which peaked at No.3, is a Top 100 breakthrough for the first half of 2021. The album finished at No.82 overall after the first six months and has sales to date of 41,999, according to the Official Charts Company

“Arlo had been developing and releasing incredible song after song, video after video, in full public view for sometime and it was important to everyone involved to maintain this pace rather than slow down at any stage,” Transgressive’s Toby L told Music Week. “As simplistic and purist as it sounds, the main reason for her breakthrough this year was maintaining a consistently high bar creatively that never dropped, and never slowed, in spite of the shifting sands around her; the train stayed on the tracks.”

The nominations for Arlo Parks follow victories for the Transgressive-signed artist at the BRITs and the Artist & Manager Awards.

“Those wins provide an incredible sense of reinforcement that you can be independent, you can forge your own path and that doesn’t mean that you can’t compete toe-to-toe with any of the biggest companies on the planet,” said Pacifico. “One of the huge advantages of the development of the digital market is that a small company in the UK can compete globally without needing the old world infrastructure in every single country around the world. You can be way more nimble.”

Central Cee is the biggest UK breakthrough act of the year with his Wild West mixtape at No.24 overall. The self-released mixtape (in partnership with ADA) has sales to date of 72,753. The UK rap star is nominated at the AIM Awards for PPL Award For Most Played New Independent Artist

There are some pre-announced winners for the ceremony, including Tricky for the Pioneer Award, Paulette Long for Diversity Champion and Adrian Sherwood for the Innovator Award.

For the Indie Champion category, there are two joint winners - Bandcamp and Love Record Stores.

PIAS was behind the Love Record Stores initiative to support indie retail during the pandemic with exclusive releases from a range of independent labels. It returns next month for an even more ambitious second edition.

“It's probably going to be bigger than last year,” said Rackham. “It's not just going to be about driving online sales in the UK, we're actually now setting this up in various territories around the world, so it's going to be an international event. We see it as a way of getting people back into stores and physically shopping as well.”

Subscribers can click here to read our Music Week Interview with Paul Pacifico.

Click here for our interview with AIM chair Nadia Khan.