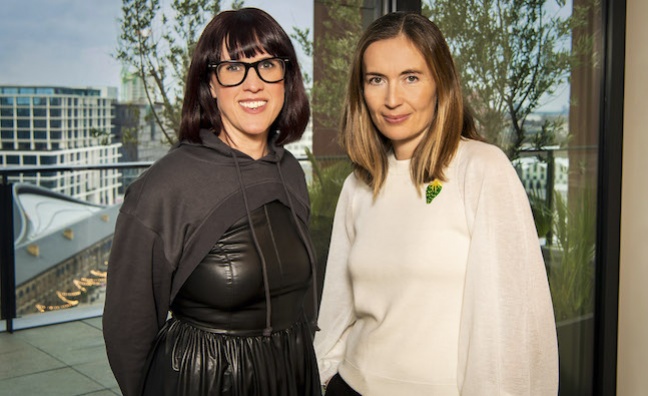 EMI has consolidated its No.1 position in the UK recorded music market for the first half of 2022, Music Week can reveal.

Based on exclusive data from the Official Charts Company, the Universal Music UK label headed up by co-presidents Rebecca Allen and Jo Charrington (pictured) is in first place. The leadership duo will now be hoping to reclaim their market shares crown at the end of the year, following RCA’s No.1 result in 2021.

In the crucial All Music (All Albums) measurement, EMI has a 10.1% share with 7,233,418 units for the first six months. The label has edged ahead with a 0.4 percentage point lead after a close Q1 battle with RCA.

During Q2, EMI had the fourth biggest single with Baby by Aitch & Ashanti (381,627) released via Capitol.

In the market share results, EMI was also No.1 on Artist Album Sales (7.6% share), All Album Sales (9.1%) and All Music (Artist Albums), although the latter measurement (including streams and pure sales) saw victory by the narrowest of margins. EMI and RCA both finished the six-month period with a 9.9% share, with the Universal label ahead of the Sony rival by less than 10,000 units.

RCA did manage to claim victory in the half-year period in the Track Streams measurement with a 10.7% share (unchanged from Q1), which represents 7.3 billion streams. The label topped the metric for the whole of 2021 with a whopping 15.1bn streams.

RCA also finished at No.1 on Track Sales, although that’s a rapidly declining market as consumers switch to streaming.

RCA’s second place in the All Music (All Albums) metric was secured with more than seven million units (9.7% share). The label group had the fifth biggest album of the first six months with Little Mix’s Between Us (119,220 sales). Doja Cat’s Planet Her, released via Ministry Of Sound, finished at No.16 (83,837 sales in 2022).

In partnership with Since ’93, RCA has had one of the big breakthroughs of 2022 with Streatham singer-songwriter Cat Burns. For the first six months, Go finished at No.7 with 672,396 sales. It did even better during the Q2 period, placing No.2 (509,763) behind Columbia-signed Harry Styles’ As It Was.

At this stage, it looks like a two-way race between EMI and RCA for No.1 in 2022. But Polydor remains a strong performer in the year-to-date rankings with a 9.2% share of All Music (All Albums). The label, which won the A&R trophy at the Music Week Awards, has had continuing success this year with Olivia Rodrigo’s Sour (No.3, sales in 2022) and Sam Fender’s Seventeen Going Under (No.19, 71,688).

Island made No.4 on All Music (All Albums) with a 7.3% share, following chart success with The Weeknd and a share in Peru by Fireboy DML & Ed Sheeran, which was No.2 overall for the first six months (821,163).

The Universal Music label can also claim the biggest breakthrough artist in the form of ArrDee, whose debut mixtape Pier Pressure (No.40, 55,563 sales in 2022) was joined by hit single Flowers (Say My Name) in the half-year rankings (No.40, 301,873).

Atlantic finished at No.5 with a 6.5% share of All Music (All Albums). The Warner Music UK label, which won Record Company Of The Year at the Music Week Awards, secured the biggest album of the first half of the year with = by Ed Sheeran (256,609), as well as its share of Peru at No.2 in the singles rankings. Sheeran’s album was No.2 overall in 2021.

Atlantic has the new No.1 album with Paolo Nutini’s Last Night In The Bittersweet (34,436 ), which debuted at the summit on Friday (July 8).

Columbia was narrowly behind Atlantic in sixth place on 6.4%, though it has momentum with the hugely successful Harry Styles campaign for Harry’s House.