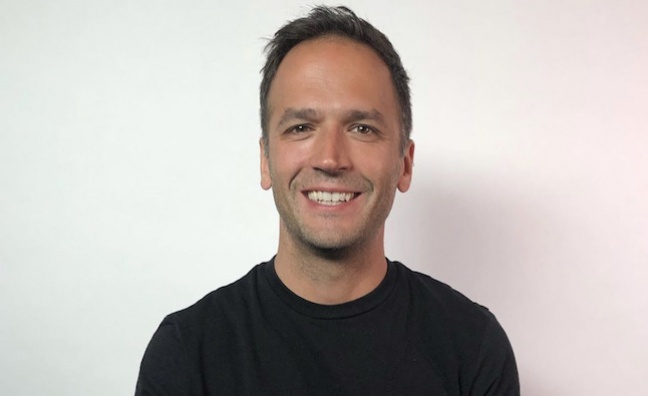 Parlophone’s Dave Rajan has been promoted to head of radio, Music Week can reveal.

The promotion from his previous position of director of national radio comes after nine years at the label.

There have also been a successful airplay campaigns for Partynextdoor and The Snuts, as well as current chart success for Masked Wolf and big plans for Bebe Rexha.

Here, Dave Rajan shares his insights on breaking acts with radio support, addresses the impact of streaming and reveals what’s in his “geeky spreadsheet”…

How is Parlophone evolving as a label?

“I've been here for nine years, I've seen a lot of evolution over that time. I’ve loved seeing what Parlophone is turning into. We've got a lot of developing acts at the moment, that is a lot of our focus and we’ve had some great success with those. It feels like we're coming into some brilliant success as well – we're poised with The Snuts, especially at radio, that's all working out really nicely. Ashnikko is doing amazing stuff for us at radio and TV, so that's happening brilliantly. S1mba had some great success last year, and with Sam Ryder it feels like he's about to take over the whole world. So I'm really excited to see where it's going.

“Historically, radio departments have been a little bit siloed, and that’s one thing I’m keen to change. Now we work in tandem with A&R, streaming and marketing to get the best outcomes for Parlophone. As soon as I started, I just wanted us to spread our knowledge, spread our conversations with everyone and see how we can help.”

Nathan Evans has crossed over from being a TikTok phenomenon to radio and streaming. Can you do the same thing with Sam Ryder?

“Sam Ryder is a really interesting one for us. People could label him with the TikTok thing and, in a way, that's been a nice thing to say. He has this fanbase on TikTok, but you won't believe what he's got to come. Nathan Evans has that track and has done amazingly well, so that's great for Polydor. But I can see the road in front of Sam now, and from what I've heard, meeting him and really getting to know him, I know that radio and TV are going to absolutely love him. So I’m really excited about where that's going.”

How has the pandemic impacted the job of radio plugging?

“When it started, it felt like a bit of a freefall, but I think everyone felt the same. There were a lot of people who were not able to go into the studio at radio, and with TV it was very difficult for them to record anything. But it's an exciting time at radio, it has become a great voice into people's isolated situations and being part of that has been a great positive energy for me. I've got a great team, and I like to give them as much autonomy to be as creative into radio as possible.”

Big thanks to the legendary Mr @scott_mills for making Somebody Loves You his tune of the week on @BBCR1 ????????@scotrefcouncil pic.twitter.com/ZiYd7lkzcw

How has it impacted the routine and social contact of the job?

“It is hard, we can't walk into those radio stations like we used to and hang out with people. We can’t be in the kitchen area at Radio 1 and bump into different producers, and that's a real challenge. But at the same time, we've been able to create so many brilliant moments. To give you an example, with The Snuts radio has really started to embrace them now. Scott Mills is a big fan and he made the new single Somebody Loves You his Tune Of The Week. [During the pandemic] when you have Tune Of The Week they just play the record and a couple of assets go up on social media. Even though we knew we couldn't go in and talk to Scott, we did some great things. We hired a billboard, and The Snuts stood next to the billboard with ‘Scott Mills Tune Of The Week’.

“Scott also has this amazing feature, Your Lyrics Different Song [an artist’s single sung to a different track]. So instead of us going in and doing it [as happened before Covid], we just did it ourselves and posted it on social media [a cover of Olivia Rodrigo’s Drivers License with elements of Somebody Loves You]. Scott loved it, he posted it and he played it. So it's been fantastic. With Ashnikko, she's been able to really create a great conversation at radio with some of the promotion that she's done with Annie Mac and Nick Grimshaw and across commercial radio. So it's challenging, but if you try be creative and have artists that lean into it, then it works brilliantly.”

Do you think radio can help a band like The Snuts break through?

"I genuinely do. I feel like it's difficult for radio with bands, because a lot of the time that’s not the zeitgeist. There are other genres: dance is so big at the moment, UK rap is such a big deal and obviously you've got pop, so sometimes bands find it a struggle. Radio needs a lot of indicators, and your major indicator [for bands] is live. But in a pandemic, it's very difficult to show that.

“One of the extraordinary things about The Snuts is that, at the beginning of the year, they put a tour on sale and sold 17,000 tickets. To be able to walk into radio and say, ‘Look what this band are doing’, you can't ignore that. I feel like it's been a wonderful tipping point, I’m really excited for them. Once you're in and you're part of that ecosystem at Radio 1, it’s a great place to be. That's what I love about Radio 1 – once you've proved yourself, they'll support you.”

Sadly we can’t visit @BBCR1, so to celebrate being TOTW we’ve done our own take on @Olivia_Rodrigo drivers license, with a taste of SOMEBODY LOVES YOU in honour of @scott_mills @Chris_Stark feature ‘Your Lyrics Different Song’ pic.twitter.com/CMTBWNKO4t

Why does radio still matter in the streaming era in terms of building artists and hits?

“It’s interesting, I get asked this a lot. I’ve started doing a room on Clubhouse about radio and how to get your songs played on radio. I genuinely do believe in it. Twenty years ago, radio was the only spire in the landscape – it was all that you really needed. Then subsequently a lot of things have come along like streaming, YouTube, TikTok, there are so many other distractions and so much more choice. But at the same time, I feel like you can't beat the narrative that radio offers and the curation. It's wonderful to be part of. I absolutely love watching a record move throughout the ecosystem of radio; I do feel like it is important. But then everything else is important too. You can still make a difference in so many ways. It's so unpredictable, the music industry, and that's one of the reasons why we're always excited by what happens.”

“Maybe I’m different about this. A lot of people will look at market share. When the Radio 1 playlist comes through, they look at other others and compare. I do, too, don't get me wrong, I'm completely granular about what goes on to that Radio 1 playlist. A lot of people who know me well are aware that I have a spreadsheet that has everything that's been added to radio in the last 10 years – it’s the most geeky thing ever. So I look at the granular detail, I know what everyone else is doing – but I don't let it cloud my judgment. I think about myself running a race, and if you look behind you then you're going to lose. You’ve got to look at the finish line and go for it.”

“Yeah, it's fascinating what's happening with a lot of tracks and the dance records. Bayside by Obskur [on Parlophone/FFRR] took three months from the start to going on to Radio 1 and that's amazing, [but] some records are taking an absolute age. Just having the one track to work gives you that freedom. But then on the flip side of it you've got albums that you want to work on, and sometimes those take a bit longer. It’s definitely a shift, whereas before in the earlier parts of my career it was wall to wall albums, that's what you did. Now with a streaming system, you don't need that so much any more. But then at the same time, I really believe that people care about albums. For artists, releasing your debut album is such a huge thing.”

Dance Monkey is still in the Top 75 after 18 months. How has it been so successful?

“I wouldn't say we're actively working on it now. But the success of that is absolutely phenomenal. To be No.1 for 11 weeks was absolutely remarkable. It was an amazing thing to watch it grow and to watch radio come on board. Seeing her at the Global Awards was one of the most rewarding moments. People had heard Dance Monkey on the radio and it was No.1 for 11 weeks, and then we got an opportunity just before lockdown to bring her in and perform at the Global awards. She just absolutely stole the show and afterwards people came up to me and said, ‘Oh my god, it's real – that's her voice’. She was amazing. When you look at that story, she was busking in Byron Bay and then eight months later she had the biggest song in the world. She’s an incredible person, a great spirit and great artist. It really was amazing to be to be part of that.”

Subscribers can click here for our exclusive on the partnership between Parlophone and Atlas Artists.