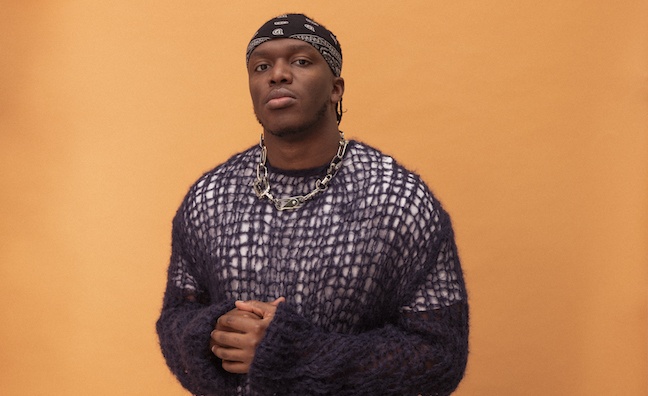 KSI is gearing up for the release of his second album, All Over The Place, on July 16.

It’s KSI’s follow-up to last year’s Dissimulation (BMG), the biggest-selling UK debut album of the year. The album is rapidly approaching gold certification with sales to date of 96,196, according to the Official Charts Company.

As well as his label team, KSI has relied on two key figures during his rapid ascent – manager Mams Taylor and live agent Mark Bennett of MBA Live. Bennett has been building KSI’s live business (including an SSE Arena Wembley date), which he discusses in the latest issue of Music Week.

Here, Taylor reflects on the rise of KSI and looks ahead to the second album campaign…

As a YouTube personality moving into music, KSI had his doubters before the debut album. Has he proved them wrong?

“I think the numbers speak for themselves. The results are there. He’s constantly putting in so much work and doing his homework. He knows every song that's out, he's on top of everything and he practices writing melodies, so he's become a real student of the game. It’s difficult to keep denying that he's morphed into a true artist, and he's shaken off the stigma of making that transition. Because whenever people say, ‘Well, he had a big fanbase to start with’, I say, ‘So did Vin Diesel’ [Diesel has attempted to launch a music career]. There are numerous examples of YouTubers, athletes and actors that try their hand at music, and then they get discouraged or disheartened.

“JJ has been doing music for over 10 years. Once he gained the confidence, he realised that, actually, he is talented – more so than he thought – and he can cultivate that talent with a lot of hard work. He was very encouraged by that and it's definitely his number one priority. I'm very proud of him for that. So it's undeniable that he's shaken off some of those stigmas at this point.”

What’s the plan for label partners and KSI’s music?

“We’re putting out his next project through BMG. It's been a really fun partnership, definitely. We've worked well together, we ironed out early issues last year or things that we could improve. As with any relationship, there are going to be some growing pains and butting of heads with different ideas. But they've been very cool. For the most part, on the creative front, it's just been me and JJ; and we’ve had the freedom to do what we wanted to do. That’s important to us, so I commend them [BMG] for allowing us to do that, for seeing our vision and helping us execute what we've done so far.

“If we had signed a deal with a major, we would not be where we are right now, because we wouldn't have had that freedom. So the fact that they had the courage to bet on us, and afforded us that freedom, is a testament to them adapting to new models and being open-minded. So I definitely give them a lot of praise for that. There have been [other] labels approaching us and asking what our situation is. But once I let them know that we're still under contract, then they respect that and let us do our thing.”

How did you achieve last year’s breakthrough?

“It was his online presence, enthusiasm and energy, and the authenticity that connects with his fans. Word of mouth is really the best PR you can get, because it's so authentic. Fans discover [the music] and feel like they have a sense of ownership over a guy who they've been a fan of [on YouTube] for many years. So that was a massive factor. And then the strategy from my team and BMG, in terms of the A&R – putting the songs together, the music, the collaborations. There were some strategic elements to that as well.

“The first few collaborators that we worked with, it wasn't as easy as it is now, where people are reaching out to JJ offering hundreds of thousands for him to jump on their song. So the tables have turned, because everyone had a scepticism about whether it was a good look to work with a YouTuber. Gradually, that's morphed and evolved into what it is now, so it's really cool.”

What’s your strategy for the follow-up album?

“We’ve made sure that every song on the album is on another level. KSI has naturally developed his own talent and his own ability as well. He’s been doing vocal lessons with a top vocal coach a few times a week. He's willing to take more risks. Now that we've managed to do what we've done and achieve the success he's had, we’re able to flirt with touching on other genres that he's interested in.

“With some new artists, I would absolutely not let them crisscross with genres because you want to form an identity. But with him, his versatility has already been praised and celebrated a lot. So because he's versatile in life and in music, it seems to connect more. When he does a drill track, people like it. When he does a track like Houdini [with Swarmz and Tion Wayne] and then does something with Anne-Marie, which are completely different sides of the spectrum, they’re both well received. So we’ve got this luxury that we appreciate so much, as the fans are accepting of his ability to touch on different genres.”

What kind genres is KSI dabbling in?

“We've got a little bit of a rock influence, we've got a pop influence and, obviously, rap. We've got some US-sounding stuff and some UK drill. It all ties in nicely, and if you listen to the album in order it tells a story and flows really well. In terms of quality, it's just on another level to Dissimulation, for sure.”

What’s been the approach to features for KSI?

“We weren't being strategic as to who was going to get the most clout, we had more of a musically purist approach to it. We're being selective but it's not about who's going to do the highest numbers, or who's got the biggest following. Growing up, I was a big fan of Craig David. And when the conversation started with JJ, he said that he loved Craig David too.”

What are your hopes for the US market?

“I think we're going to make a little bit of a splash in the US with this album. His delivery on some of these songs is such that it can be understood by an American audience, some of it’s more melodic. If you listen to a lot of UK rappers, it’s so British that it just doesn't connect with a US audience.  You can't name one UK rapper who's broken in the US on a big scale, other than 21 Savage, who was British-born but he doesn't sound British at all.”

Given his proven track record, is KSI looking at co-writing opportunities for artists?

“Not for now. It's come up a couple of times. I think it would be quite cool and credible for him to do that, so it's a conversation that I’d like to explore further with him. He’s learned how to write for himself, so there's no reason why he couldn’t do that. I'm sure lots of opportunities will keep coming up, and there are songs he's done that are really great but not right for this project. I'm sure there are artists out there that they would fit.”

After the scepticism, has KSI proved that he ranks alongside the top British rappers?

“It's undeniable in the UK [but] we can't take anything for granted. We have to be meticulous with the music and put it before everything else. We want to keep growing, we still have ambitions, we're not at all in the place we want to be in. It's important to stay hungry and to be ambitious, because that's the only way you're going to have a great work ethic if you're excited about what else you can do. We're not getting into any kind of lazy, relaxed mode of, Let's just chill where we're at doing this. The passion has got to be there and, thankfully, it is. So, yeah, we’ve just got to keep going.”

Subscribers can read the Music Week interview with KSI here.