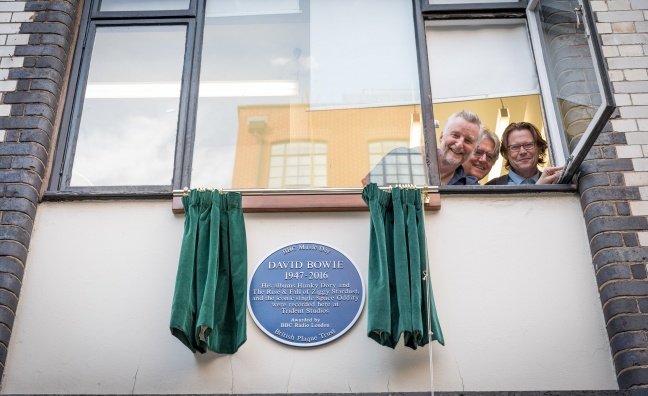 The blue plaque, commemorating the late icon, has been installed outside Trident Studios in St Anne’s Court, Soho where Bowie recorded the legendary albums Hunky Dory and The Rise and Fall of Ziggy Stardust. It was unveiled by singer songwriter Billy Bragg and Bowie’s lifelong friend, painter and designer George Underwood, who also designed some of his album covers.

Bragg said: “David Bowie was the greatest of the London boys that came out of the 60s. In 1971 he turned into something strange and curious - Ziggy Stardust. It’s great to commemorate this spot with a blue plaque, so that everyone who loves these records can gaze up in wonder at Trident Studios.”

Underwood said: “Knowing David he would be pleased about the plaque, but he would also make a witty remark about it! I’m sure he’d be very chuffed.”

The initiative formed part of BBC Music Day on Thursday, June 15, a UK-wide annual celebration of music that aims to unite communities and generations through their love of music.

BBC Local Radio, the BBC Asian Network and the British Plaque Trust have announced that there will be 47 new blue plaques to commemorate people or places that have influenced the musical landscape across the country.