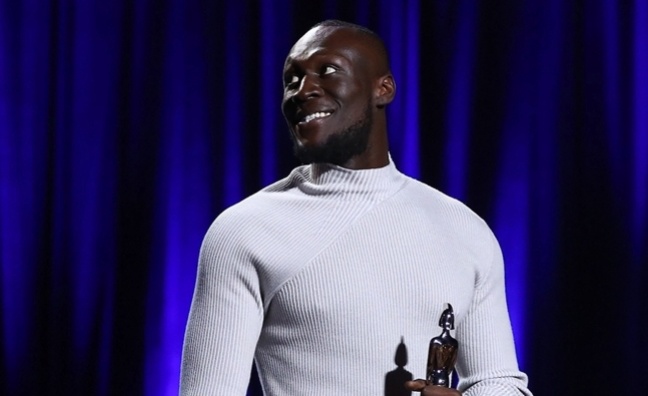 Lewis Capaldi was a big winner at the 2020 BRITs with two awards – Best New Artist and Song Of The Year for Someone You Loved.

But the victories were shared around on the night, both in terms of awards and the likely beneficiaries from the ITV show at The O2. There were big performances from Lizzo, Billie Eilish, Mabel, Stormzy, Dave, Rising Star winner Celeste, Rod Stewart and Harry Styles, the subject of several wisecracks from host Jack Whitehall.

If the ratings work out (BBC One’s Holby City was the main rival), it could be a good result for the revamped BRITs overseen by showrunner David Joseph, Universal Music UK CEO/chairman, Music Week’s cover star with creative director Misty Buckley. The show zipped along and balanced big-name performers with artists who would have been new to the majority of the TV audience (Lizzo, Celeste, Dave).

It was a good night for UK rap with triumphs for Stormzy (Male Solo Artist – his second time winning – in association with Amazon Music) and Dave (Mastercard Album Of The Year for debut album Psychodrama). Psychodrama (Dave Neighbourhood/Universal) has already secured Dave the Hyundai Mercury Prize and AIM Awards, and it can now expect a significant boost to its current sales of 180,451 (Official Charts Company).

Nominated in four categories, Capaldi was in the running for both the album and Male Solo Artist categories. His debut Divinely Uninspired To A Hellish Extent (EMI) was the biggest album of last year and has sales to date of 761,572, according to the Official Charts Company.

Capaldi performed an emotionally charged Someone You Loved before collecting the Best New Artist Award (supported by BBC Radio 1), the first gong of the night. Swigging a bottle of Red Stripe (he later switched to Buckfast), Capaldi gurned, grinned and swore (“Thank you very fucking much”). Perhaps it wasn’t ideal for ITV but it was a glimpse of the Scottish singer-songwriter’s authenticity and funny bones.

Whitehall acknowledged the lack of women among the nominees during the Female Solo Artist category (in association with Amazon Music), which went to Mabel. It was her only award of the three for which Mabel was nominated, though she was one of the standout artists of the show thanks to a playful opening performance of Don’t Call Me Up, as well as a memorable family moment that will surely lead plenty of the awards’ media coverage.

After hugging her mother Neneh Cherry and wiping a tear, Mabel collected her trophy.

“I had the honour of walking the red carpet today with my amazing Mum,” said the former Music Week cover star, pointing out that it was 30 years ago to the day that Cherry won two BRITs and performed Manchild.

While Mabel didn’t address the issue of women represented among the nominees, Stormzy did make a nod to the diversity agenda when he collected his award.

“I’ve got the most incredible females on my team,” he said.

The leaner line-up of awards (10 including the pre-announced Rising Star and Producer Of The Year for Fred Again) speeded up the show. Several artists embraced the much-touted concept of pushing their own creative agenda this year.

Harry Styles did perform an album track, Falling, though it was classic BRITs ballad territory and nothing to frighten the horses.

Billie Eilish’s No Time To Die (Interscope/Polydor) already sounds like a classic Bond theme. With Hans Zimmer and a full orchestra accompanying Eilish for its live debut, it’s a bit of BRITs history too. The single’s already on course to be No.1 this week – now the streaming numbers will surely be huge. For good measure, Eilish took home the International Female Solo Artist prize, welling up as she collected the trophy from Mel C.

Lizzo lost out in that category but owned The O2 stage with a medley that captured the joy of her no-holds-barred live show.

“The BRITs turned up,” Lizzo told Jack Whitehall. The US singer then embraced Harry Styles on the next table. Her Cuz I Love You album will now presumably reach a new peak – its highest position so far is No.40, although it’s sold 65,052.

It was undoubtedly a brave decision for Dave to perform Black at the piano on a stark stage rather than the million-selling Location. But it was possibly the performance of the night, not least because of the updated lyrics referencing Boris Johnson ("a real racist" - a line not cut by ITV) and Meghan Markle, as well as the London Bridge terrorist attack, the Windrush scandal and Grenfell tragedy. And it was a nice moment to see Fraser T Smith sharing the stage on the piano.

“Powerful and provocative stuff from one of the most exciting artists in Britain today,” said Whitehall.

Tyler, The Creator singled out Johnson’s predecessor, Theresa May, for criticism. When Home Secretary, May banned the Odd Future member from entering the country supposedly because of homophobic lyrics.

Stormzy was granted an extended performance time and made the most of it with a powerful run through tunes from the Heavy Is The Head album (Atlantic/Merky), including the No.1 Own It with Burna Boy (but no Ed Sheeran this time).

Foals won the Best Group category on a night that featured not a single band as part of the performer line-up. At least it was recognition for the group, who scored their first No.1 album this year.

While Dave only converted one of his four nominations into an award, it was the big one for Album Of The Year.

"There are so many legends in this building," said the rapper from Streatham, who received the statuette from Billie Eilish and her collaborator brother Finneas O'Connell.

At an evening celebrating youth culture, the show closed with a performance by Christmas No.1 album artist Rod Stewart, with Ronnie Wood, Kenney Jones and the RPO.

All the performances will be exclusively available on Amazon Music this week.

Pick up the latest issue for the full interview with David Joseph – or subscribers can click here.

All the BRITs 2020 winners are below.

Song Of The Year – Lewis Capaldi, Someone You Loved

Producer Of The Year – Fred Again