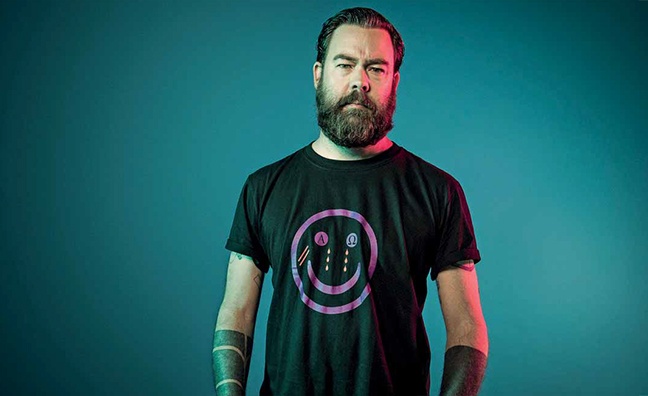 Need something to listen to during lockdown? No problem, let Music Week recommend some key podcasts.

You may know Daniel P Carter as the host of the BBC Radio 1 Rock Show, but since 2016 he has been producing his very own podcast, one in which he interviews (and paints!) some of the biggest names in rock and beyond, with recent guests including Linkin Park’s Mike Shinoda and Jane’s Addiction’s Perry Farrell. Here you can revisit his MW interview from 2019 all about the podcast...

You already have the Radio 1 Rock show, so why start the SWIM podcast?

Daniel P Carter: “Basically the goal with Someone Who Isn’t Me was to be able to sit down with artists I really respected and ask them, not just about their latest album or book or whatever, but to have a long conversation about the creative process and more often than not, what that implies from a wider viewpoint. I think people really want to hear the artists they like speaking honestly about things they might not always get to talk about. Podcasts are so important because they can be as niche as you like, but they will always find their audience and, as we’ve seen, those audiences can be huge. People want long form conversations on some really obscure stuff that goes past the first few layers. Which gives me hope. I’ve learned, regardless of how niche things can get, there are a ton of people that will be interested in listening to it. Having conversations with artists outside of the usual remit, especially when they are on a press junket, can be the best interviews they’ll do as well and people definitely respond to that. Also I don’t see any other podcasters painting portraits of their guests for the episode covers. What a stupid idea that was to start with! Making oil paintings of each person that comes on is a nightmare, as that generally takes 10 times longer than the conversations themselves, but, I’ve started now and it’s another one of the things that sets it apart!”

What else sets your podcast apart from some of the others out there?

“Well, I think I’m able to have very open and frank discussions with a lot of the artists about art, music, mysticism and whatnot, which generally doesn’t all get covered in one place. More often than not, most ‘music’ podcasts don’t ask about creativity and how that isn’t always a solely internal process. I already have an inkling that a lot of the people I ask on will be happy to go off on slightly more esoteric or metaphysical tangents and the ones that are a bit more reluctant can be coerced into it by me being open about a lot of that stuff, how I relate to it and how previous guests feel about it, so they aren’t left feeling like they’re going out on a limb to discuss it.”

“The podcast I think that’s resonated the most with a lot of people is the one I did with Dan Searle from Architects. We did it six months after his twin brother and Architects guitarist, Tom, had passed away from cancer at 28. The band were about to embark on their first run of US shows since his passing and Dan was getting asked by a lot of magazines to speak about the situation for the band and about Tom’s passing. He actually contacted me and asked if he could come on the podcast to discuss all of it so that it would all be there in one place and that way he wouldn’t have to keep talking about it with publications. It was a weird one to be asked, as it wasn’t something I would have asked him to do myself. So for him to decide that SWIM was the platform he’d like to do that on was quite humbling. That’s still the most powerful episode that there’s been. The episode with Marilyn Manson is still one of my favourites. We did that at his house one night. We get on really well and I think that showed in the conversation, a lot of his fanbase said it was one of his most open interviews, which makes me feel like it was a success. When I first started Someone Who Isn’t Me, I made a wishlist of people I’d like to speak to and I’m slowly working my way through it. The ones I’d still really like to cross off the list include Robert Smith, Nick Cave and Peter Levenda.”

Are you pleased with the reaction to everything so far?

“As far as impact goes, I’ve had artists hit me up asking if they can come on and record an episode, so I guess its getting somewhere. As far as figures go, I know its reach and effect is pretty decent. When I first reached a quarter of a million downloads, I knew it was starting to do its job…”