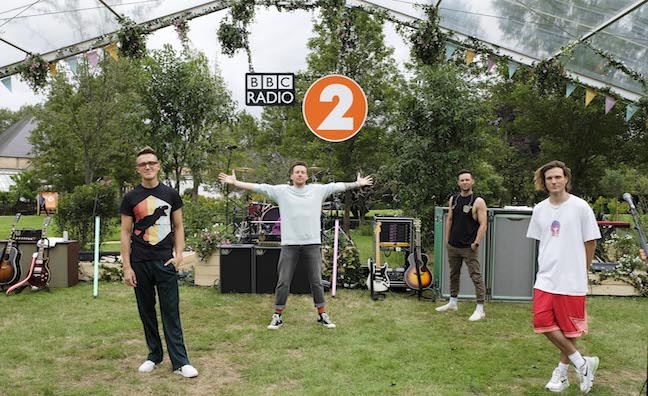 Radio 2 head of music Jeff Smith has spoken about the station’s ambitious replacement for its annual Hyde Park festival during the Covid-19 pandemic.

The coronavirus pandemic prevented the network from staging its 50,000-capacity live music weekend, featuring both Proms In The Park and Radio 2 Live In Hyde Park.

All UK performances have been filmed at Radio 2’s Live At Home stage in the grounds of a hotel in Hertfordshire. International artists will perform at home or other locations – Nile Rodgers is in Central Park in New York, while The Killers are on the roof of Caesars Palace in Las Vegas.

Radio 2 will air three hours of performances and interviews from 7-10pm on Saturday and Sunday, featuring presenters including Zoe Ball, Fearne Cotton, Trevor Nelson, Jo Whiley and Sara Cox. Previous Radio 2 Live In Hyde Park festival sets have also been made available this month on iPlayer and BBC Sounds.

As well as live coverage on Radio 2, the event will be featured on BBC Sounds, iPlayer, the Red Button and a one-hour special at 10.50pm on BBC Two on Sunday night.

Here, Jeff Smith takes us inside the plans for Live At Home…

Are you disappointed not to be staging Live In Hyde Park this year?

“Of course, it is inevitable, though, isn’t it? It shows the state that live music finds itself in at the moment, which is not a great place to be for everybody. So I think it's up to the BBC to try and support live music as much as we can. But clearly there's only so much any of us can really do. We’re trying to still deliver something from the point of view of audience expectations and seeing some live music out there, even if it's not in front of an audience is. It is a shame that we weren't able to do it this year, but these things have become inevitable.”

What have you learned from the various BBC virtual events, such as Big Weekend and Radio 2’s House Music?

“People seem to really like them. We've seen a lot of pick-up on the House Music season we've run in Ken Bruce’s show across Radio 2, which has replaced the Piano Room during this time. We’ve found that it really seems to excite the audience and does seem to get numbers, in terms of people viewing them [online], and obviously they hear them on BBC Sounds and on Radio 2. The Glastonbury Experience was a great example of a cross-platform initiative, the BBC has realised it’s got this amazing archive. We're also able to commission some exciting new performances. But the archive really has been brought back to life again this year. In the face of this pandemic, it lets people remember, nostalgically, how it was, but also – hopefully – optimistically look forward to how it will be again in the future.”

It’s going to be great, the performances will have some power and impact

What kind of performances can people look forward to?

“They will be 20-minute to 30-minute sets. We're trying as much as we can to replicate the live feel as much as possible, while also being aware that with the platforms these [performances] exist on, people don't tend to consume for long periods of time. Although with livestreaming, there is a definite interest in longer-form content from artists that people really love. Looking at the line-up, I think these are artists the audiences will really love.

“It’s going to be great, the performances will have some power and impact – the majority of them are with bands. Because we’ve seen so many pared-down performances on a keyboard or guitar in people’s front rooms, I wanted to get people outside and make it feel expansive and big. We’re the first people to do something this ambitious as this time.”

How did you guide artists for their Live At Home performances?

“My advice to all the artists and labels was that, what I wanted to get was the feel that it was all outside, so people could feel the spirit of the great outdoors. When so many people nowadays are stuck inside, let's get the feel that you would feel if you were in Hyde Park.”

It’s quite a diverse line-up too…

“Over the years [at Hyde Park] we've always been very broad and had a good range of people. I think it's important to show a diversity in terms of genres of music, as well as diversity of people within the line-ups that we have.”

What kind of impact can this Live At Home event have on iPlayer, Red Button and on TV compared to a Hyde Park spectacle?

“All the things we've seen so far, no matter how well they've done, whether it be Big Weekend or the Glastonbury Experience, they've done well and we've been really heartened by it. I don't think they've quite reached what a live event would actually do. I suspect it won't get to those numbers. But I'd like to think that we can achieve something on the way to those numbers. Even if we did half or three quarters of what we've been doing in previous years, we’d we'd be really happy with that kind of result.”

Was it also important to get a strong line-up of Radio 2 presenters involved?

“Absolutely, it creates that kind of feel that we would do in the park. We're not able to do that this year, so having the presenters involved adds more of that Radio 2 gloss to it. I think it makes it even closer to, if not exactly the same as, what we would normally be doing at this time of year.”

Radio 2 is nominated at the Music Week Awards, including the Radio Station category.

To read the full report on Radio 2 Live At Home, subscribers can click here.