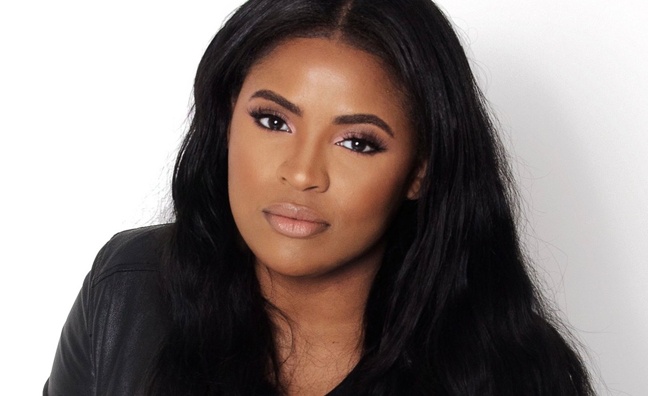 Music Week is teaming up with YouTube for the Women In Music Awards in October – Black History Month – with our second content offering and webinar event, The Legacy Series – Gifted And Black: Women In Music. Here, Music Week’s Adenike Adenitire meets Whitney Asomani, co-founder of marketing and consultancy companies Twenty:Two Agency and The Balley, plus manager of the legendary Sugababes...

A music industry executive whose dynamic career has spanned multiple disciplines over the past 12 years, Whitney Asomani is a BRIT School and University Of The Arts alumnus.

At the beginning of her career, aged just 18, Asomani cut her teeth in celebrity and events PR, before moving into television climbing up the ranks to become a music executive at ITV, before being headhunted to go over to BT Sport in a management position at just 25.

Transitioning over the years to realign her focus and desire to centre artists at the core of her work, Asomani has delivered impactful moments which include producing British Arts Council-funded music events and tours which championed the early careers UK acts such as of Abra Cadabra, Big Tobz, Kay Rico, Aitch and more. She has also consulted for Burna Boy, girl group M.O on their hit single Bad Vibe ft Mr Eazi & Lotto Boyyz and, at Sony Music Entertainment, saw success with artists from RCA and Since '93 where her roster included UK and international acts: NSG, Brockhampton, Scribz Riley, Jvck James, DDG to name a few.

At the beginning of 2020 Asomani left Sony Music Group to focus on managing Sugababes’ epic return to music alongside Matt Johnson of Red Light Management, and launch two new business endeavours, co-founding Twenty:Two Agency and The Balley, both of which were established to continue to put talent first, operating at the intersection of marketing, culture and legacy.

The Balley, meanwhile, operates as a cultural consultancy on projects that aim to focus on Black impact and legacy across music, entertainment and sport, and has since produced YouTube Legacy Party, YouTube Legacy Fashion Show, Ian Wright's – Wrighty's House Live for Barclaycard, and events in Ghana, to name a few.

The return of Sugababes has included One Touch's reissue campaign with London Records, a successful run of summer shows including headlining Mighty Hoopla, Westlife tour support, and shutting down the Avalon field due to high demand at this year's Glastonbury festival. Sugababes embark on their much anticipated headline UK tour in October 2022.

Here, Asomani discusses the thrills of setting up your own business, the art of marketing and the importance of mentorship...

What was the inspiration behind setting up your own agency Twenty:Two?
"So, my [business partner] Tasha [Demi] and I met when I was consulting. I was working on a girl band called M.O, who were signed to Polydor, so I'd see Tash all the time, as she worked at Polydor, but we didn’t really chat, just kind of a, ‘Hi and bye’ vibe. Then, when I moved to Sony to launch Since '93 with Glyn [Aikins] and Riki [Bleau], we came on board to do their marketing, and Tash was the other person hired to do marketing. So from there we formed a close bond and good relationship. Later on, I left Sony to manage the Sugababes, but ultimately, my bread and butter was still marketing, so I started a small consultancy by myself whilst managing the girls. But then it got to a point where I was getting so many enquiries I couldn’t manage the workflow so I was sending people to Tasha. This was because, at that point, Tasha had also left Sony. So I'd be like, ‘I don't have capacity, but you should try Tasha who is amazing’. And then one day, we just met for a coffee, it was just like, ‘We are both sending each other work, why don't we just make this a thing?' So we formed Twenty:Two and that was the umbrella under which we could combine our marketing strengths."

What was it like establishing an independent business in the era of Covid? And were there any initial challenges?
"I think the challenge was the uncertainty and just a little period where we'd launched the company, started to have an initial chats by going into buildings for in-person meetings, and then they shut down and their sole focus was their own operations. So it wasn't about trying to engage with consultants and contractors when they had their entire workforce and roster of artists to service and to think about. So we had a quiet eight weeks, and then everything picked up again, because I think the industry was just like, ‘Okay, this is long term, so we need to continue’. Also, working from home… I think the solitude was hard because I live by myself and I'd just come out of a major label where you've got hundreds of colleagues and then it's just Tasha and I looking at each other over Zoom screens. But it was about really believing in the business and just knowing that this can be successful."

What have you learned from your experience of working on campaigns from the likes of Burna Boy, NSG and Ivorian Doll?
"The first thing is that no one size fits all, for any artist or any campaign. You really need to take a nuanced approach to everyone and everything. Coming from a major label, where everything is like a conveyor belt, because you've got so much, and we don't really have the time to dig deep into campaigns. Working at our own agency allowed us to curate our roster and really take time to get really granular with our artists, understand their audiences, and what's going to work best for this single or for this album. Another big thing is, when you come outside of a major label, not a lot of artists have budget, so you don't have a Sony or a Universal paying for the campaign. One of the biggest things was learning how to be really creative with limited funds. But I am really proud of the way were able to turn nothing into something, and to still deliver impactful campaigns or moments for artists."

Alongside the pandemic, routes to marketing have changed a lot of in the past couple of years. What would you say is the key to a good promo campaign in 2022?
"When it comes to marketing, for us, it's really understanding who your audience is and where they live. So, one artist’s audience might live completely online, they might live on TikTok, for example, and it's then understanding how to make TikTok work for the music and how to translate the support that they get on that platform into other areas. And then it's trying to make something visually interesting when we're doing marketing. We take the assets that were given or we actually create the assets, whether in music videos or artwork, and just try to understand what stories that artist is trying to tell through the visual."

You were also part of the PRS/YouTube Power Up initiative – how important was taking part in that to you? How crucial is it that networks like that exist?
"I think once you come outside of an institution, you feel quite unsupported. You've got no HR. I've got Tasha but you haven't got colleagues, or a system to fall back on. What the Power Up Foundation provides is not only assistance but a network, and resources to tap into. I think that's important, not just for the artists that are part of the campaign, because they get access to executives like us, but for us it creates a network and a bit of camaraderie. So Power Up is important as the more we work together, the more the industry thrives."

As you've said, you work closely with Tasha Demi – what does what you've been able to achieve say about what's possible in an industry that is still so male dominated?
"I'm really proud of us and sometimes I think I take for granted what we have achieved thus far. We started a company in the pandemic, we've been financially successful, but also part of some really impactful campaigns. But I think we really plugged a hole missing from the industry, which was providing access to experienced marketeers that didn't already belong to a label, because you can really appreciate the work that someone does, but if they work for Universal for example, you don't get to have access to them if you're a distributor, or if you’re Ivorian Doll, Millionz or NSG, for example, who at that point have gone down the independent route. So I think we've paved the way because now there's a lot more people leaving their marketing positions at labels and starting up as a freelancer or consultant, and I think that's because we've been able to show that actually there's a lot of work to do in this sector, and there's enough work for everyone."

Are there any industry mentors who have supported your career that you would like to mention?
"What I will always be grateful for are the first people to give me a job when I didn't have experience in the field. And those people are Jackie Davidson [founder, JD Management] and Vanessa Amadi [founder, VA|PR Publicity]. After that I went off into TV, did my own thing and developed myself. But I think just the synergy of two black women who didn't know me, and didn't owe me anything, was really special. I did some great projects with Vanessa, I got to see a lot of things and got to travel with her. I think I was 16 when I first worked with Jackie, and again it was just getting an insight into management, and being inspired to sit in an office of a company founded by a woman. She is a also a mum, so she's navigating motherhood and running a business. I'll be honest in saying I don't have a mentor today. I haven't had a mentor throughout my career and I would love to be that for the Whitney equivalent 15 years ago, who's trying to look to get into music."