'A rebalancing needs to take place': Nigel Elderton on 30 years of supporting songwriters at PRS 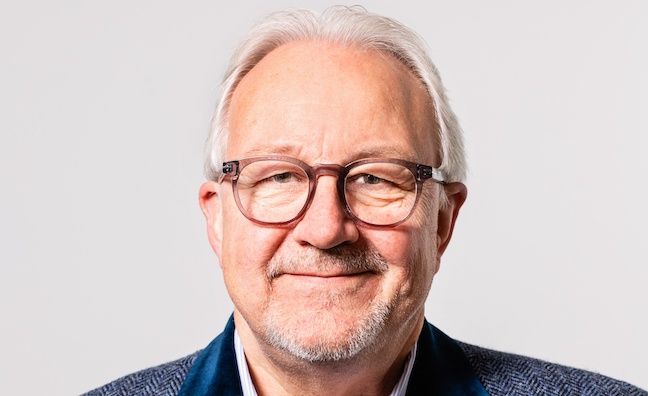 Nigel Elderton has spoken to Music Week to mark his departure as PRS For Music chair.

Elderton, MD and European president of Peermusic, has stepped down after a six-year term. In total, Elderton has spent three decades on the PRS board (now Members’ Council).

Since 2017, the hugely experienced industry figure has worked closely with the PRO’s chief execs (previously Robert Ashcroft, now Andrea Czapary Martin) on key issues including the PRS-PPL joint venture, the ICE pan-European licensing hub and reform of the organisation’s governance, including term limits and the establishment of the Members’ Council, for which Michelle Escoffery was recently re-appointed as president.

The society has grown to represent over 160,000 members and is targeting £1 billion in royalty collections in the years ahead. Recent developments include the planned roll-out of a metadata portal to remove barriers to the royalty process.

Nigel Elderton is interviewed in the current issue of Music Week. Here, in an expanded online version, the outgoing PRS chairman looks at the licensing landscape, the funding challenges for PRS Foundation and reflects on those game-changing ventures, as well as his role in creating an enduring relationship with Glastonbury…

How does it feel to be stepping down from PRS?

“I started on the board in ’92, so I've been there for 30 years, which is quite unbelievable. I was certainly one of the youngest, if not the youngest, director at PRS back then, and I'm now probably one of the oldest! The last six years I've been honoured to be the chairman. During that period, I instituted the governance review, and part of that review was to look at the term of directors because we wanted to try to accelerate the refreshing of the board - you want new blood coming in.”

You’ve had a lot to deal with in your time. What advice would you give to your successor?

“There are always challenges and different technologies. If you look at what we now deal with in terms of just the multiplicity of broadcast channels, radio stations, online and DSPs, and the amount of customers that we are now engaged with and who we're licensing to, that has just exploded exponentially over that 30-year period. Julian [Nott, composer and incoming chair] is an experienced director in his own right, so he knows the turf pretty well. As chair, it’s about trying to ensure that a very wide, diverse membership of 160,000 are catered for in the best way that we can possibly do that. People need support, they need to understand how the industry actually works. So there's a big job to do there.”

“There are all the smaller ones that come to market, there's an element of playing whack-a-mole with a lot of these online businesses. But I would say that ICE and PRS have got it pretty well covered. There are companies that have come to market that we're looking at to see how they're evolving with their licensing status. Obviously, all the big DSPs are licensed, PRS is going through a renegotiation with Spotify at the moment and TikTok. On the broadcast level, the BBC, ITV, Sky, they're all big money [partnerships] we all have to focus on periodically, as those deals come up for renewal. The challenge is always the value of our rights. We're constantly striving to try and increase the value.”

“The UK music market is a phenomenal business. It's our creators’ music, they are global titans and our repertoire travels far and wide. And, of course, PRS writers benefit from that. Obviously, Covid lockdown impacted us hugely on live and public performance - we were about 80% down in revenue terms. But at the same time, we had a really big bounce on digital, with a lot more people subscribing to Netflix, Amazon Prime, Spotify. I don't think we're necessarily out of the woods, I'm being very cautious. With the recession, not just in the UK but around the world, we will start to see a drop off in advertising revenues. But without stealing Andrea's [Martin] thunder, I think this year's revenues are probably going to be record revenues, and that is testament to the repertoire [travelling] around the world that is delivering for PRS members.”

Does that show how efficient PRS has become?

“You're right, I think we've got an incredibly professional organisation. With Andrea coming in [in 2019] to deal with the big data issues that are big challenges for PRS - and indeed, for all of us, publishers and other societies - she certainly got on top of that area. I'm feeling very confident that PRS is in a really good position now,  whereas a few years before she joined we had the debacles with distribution issues. We've probably got the strongest management team we've had at PRS for many years.”

I’m a publisher, I've always represented songwriters’ best interests, and I don't think they are getting enough

You singled out Glastonbury in your AGM sign-off speech - why?

“Basically, Glastonbury and PRS had no relationship really, until Michael Eavis came to see us one year. There was a licensing relationship, but there was no connection. So we went to Glastonbury to look around and what we found was that there were so many other parts of the site that weren't being licensed properly, all these pop-ups and various things. So we actually ended up with better licensing fees. During those few days, I remember saying we should have a members’ tent, because everybody on those stages is a PRS member. So from 2014 we got Michael to agree to have a members’ tent, which has grown into this phenomenal place just by the John Peel stage. We have quite a lot of our customers there, everybody from the head of Tesco to Sky to the BBC, and some of the politicians have been photographed in various poses. We had the [then] governor of the Bank Of England [Mark Carney]. We had 20 acts play this year, from Self Esteem to Celeste. It's a little oasis in the middle of that frenetic wonderful thing called Glastonbury - even the toilets are more fragrant in our little area! Yeah, it’s very close to my heart, I have to say.”

How involved were you with the PPL-PRS JV early in your term?

“Very involved. In fact, the PPL joint venture was something that we were striving for for probably a decade or more, and it's a testament to the way Peter Leathem [PPL CEO] came to it. Fran Nervkla [former CEO] before him set the path, as did Robert Ashcroft, PRS’ previous CEO. If there were milestones in my directorship over 30 years, I'd name the PPL-PRS joint venture as being one of the most significant partnerships we've created. It was groundbreaking, frankly, and I hope that other societies around the world might look at that as a model for themselves.”

And teaming with GEMA and STIM on a multi-territory licensing hub ICE - why was that significant?

“It’s phenomenal - it's been a really great success story. The revenues are growing, the deals that have been concluded have been really groundbreaking in terms of value. ICE Cube is a multi-territorial database [copyright platform] of everybody's works - it's a big jump for the industry. My wish is that once we've got that right, and we’ve created a Northern European hub for data processing of digital rights, then we can replicate that around the world. If we could do that, then you've essentially got a global rights database. That means that we're going to be able to clean up our data, it's going to be more efficient, and there will be less money sitting in PRO database suspense accounts. The writers who have written something will actually get paid for it, rather than it going down a black hole.”

There has been a funding squeeze for PRS Foundation, what have the pressures been on that financial support?

“It's been a very tough decision. I'm hugely supportive of it [but] the fact of the matter is that the money that we've been able to use historically to fund the foundation has come from non-distributable revenue. It's money that, for various reasons, we haven't been able to find a home for. We've had very low, in fact zero, interest rates for a long time. And that has meant that there has been less and less money available to us to give to the Foundation. I signed the alarm bell [five years ago] saying, ‘Look, we need to find another funding model.’ I've always been of the opinion that we should just ask the members, and say: It's a fantastic organisation, can we have a small percentage of your overall income.’ It was about 0.3% at the time. I would have taken it to the AGM and asked, but the trustees didn't feel that they were in the best place to do that.

“Since then, interest rates have taken a slightly different turn. I'm not going to say a turn for the better [for the wider economy], but in terms of interest that's available and will be available  that's increasing again to pretty sizeable levels. I think we'll probably be able to finance the PRS Foundation certainly for the next few years - that’s circa £2 million a year - given that we've now got those interest rates back. So in a way that issue has gone away for the time being. I would have liked to have solved it or resolved it for all time [with a members’ funding agreement]. It's a very worthy cause, it's a fantastic organisation.”

Finally, do you think that the value of the song is being recognised?

“There's a recognition that the value is out of kilter. But I don't think we're really seeing the value increase that much, that's still to be resolved. I'm a publisher, I've always represented songwriters’ best interests, and hand on heart I don't think they are getting enough. It's a very hackneyed phrase, but it all starts with the song. If you don't have a song, you don't have a recording. So there is an element of rebalancing that needs to take place. But when you've got major record companies, they're not exactly going to roll over and volunteer this. So there are some battles ahead. I hope we can do it in a phased way which everybody will understand is the right thing to do as the industry evolves.”

The BPI also has an outgoing industry figure - CEO Geoff Taylor - read his reflections on the industry here.