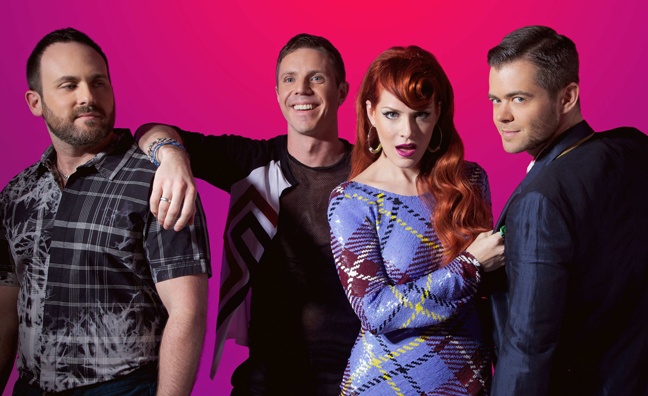 Comprised of Jake Shears and Ana Matronic as vocalists, Scott ‘Babydaddy’ Hoffman as multi-instrumentalist and Del Marquis as lead guitar/bassist, Scissor Sisters first broke onto the scene in the early 2000s with UK hits Laura, Comfortably Numb and Take Your Mama. To date, their No.1 self-titled debut album has sold 2,785,346 copies according to Official Charts Company data. Its 2006 follow-up, Ta-Dah, meanwhile, has shifted 1,495,003. They released two more Top 5 albums in 2010 with Night Work (No.2) and 2012’s Magic Hour (No.4).

Speaking about their new catalogue deal, Shears said: “Baby Daddy and I are really proud of all the music we’ve created together and couldn’t be happier to have Warner Chappell Music looking after our songs going forward. The worldwide team have some really awesome and ambitious ideas of how they’ll reinvigorate our catalogue and we can’t wait to see what they do.”

We couldn’t be happier to have Warner Chappell Music looking after our songs going forward... They have some really awesome and ambitious ideas of how they’ll reinvigorate our catalogue

Emily Foreman, creative manager at Warner Chappell Music UK, added: “Scissor Sisters are such an iconic name in dance and pop culture and their early songs still sound as fresh and innovative as they did when they first came out. I’m honoured that we’ll represent these classic records at Warner Chappell Music and I’m looking forward to finding ways to connect their songs with new audiences.”

In more Scissor Sisters news, the group have also appointed Fascination Management as their legacy managers, who have enjoyed extraordinary success with the likes of Jessie Ware, plus Steps’ epic reunion.

Peter Loraine said: “It was an honour to be asked by the band to caretake, nurture and develop their business. Their catalogue of music and visuals is first class and has so much potential. I worked with the band during my years at Polydor, so to be reunited professionally is a dream come true.”

You can revisit our in-depth, career-spanning interview with Peter Loraine here.

Last week, Shani Gonzales – EVP, managing director of Warner Chappell Music UK and head of international A&R – was inducted into the Women In Music Roll Of Honour in association with TikTok. You can read her latest interview with us here.