"Coming up with business ideas is similar to writing songs": Iron Maiden's Bruce Dickinson reflects on his incredible career 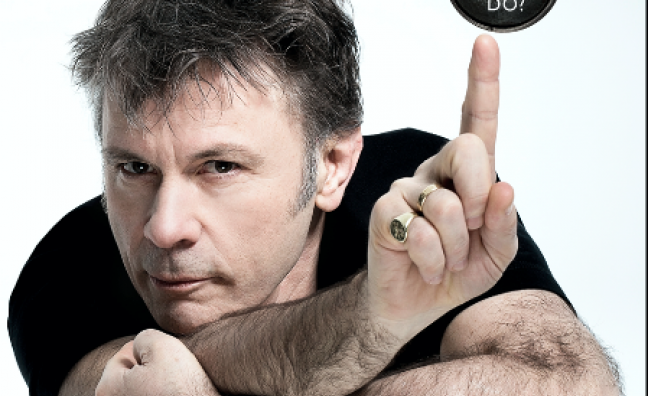 In the new issue of Music Week, we speak to Iron Maiden’s legendary singer Bruce Dickinson all about his long-awaited autobiography What Does This Button Do?, which was released this month via HarperCollins. Dickinson is one of many music acts to be releasing a book in Q4, but few – if any – will be able to rival the scope of his. As the book’s title intimates, his career has been defined by an insatiable curiosity, taking in numerous extracurricular creative and business ventures along the way, from his solo career to his aviation enterprises, fencing exploits and work as a BBC radio broadcaster, author, filmmaker, award-winning beer brewer and entrepreneur.

Dickinson could have written this autobiography at anytime from the mid-90s on, yet the singer told Music Week that it was his recent battle with head and neck cancer – retold candidly in the book - that provided the impetus.

“Sixty is not a bad time to have an autobiography,” he reflected. “You’re not done yet by a long chalk, but 60 is not a bad time to say. ‘Let’s have a big review’. And also the brush with throat cancer, I sort of went, ‘Hmmmm, that’s a really good end point for it’. It’s almost like there’s a new chapter starting.”

What Does This Button Do? contains some highly emotional recollections, including his visit to war-torn Sarajevo to play a gig as a solo artist and his recent battle with cancer.

“Getting diagnosed with cancer is an out of body experience to begin with,” explained Dickinson. “You don’t feel sick, you might be a little bit, like you’ve got a cold or flu, but you’re told that you’ve got throat cancer. You do almost distance yourself, there’s another you listening to yourself talking about it going, ‘Is this real?’ You walk outside, ‘It’s cold tonight, that’s real’. You’re told, ‘You have cancer’ – is that real? Shit. It’s the same thing as when you’re bouncing around in a truck on the way into Sarajevo and you go, ‘Hmm, this is real, we’re going somewhere where there are real bullets, real landmines and people really get killed’. Then you get into the city and you realise how real it is. You go there, you come away and think, ‘Wow that was intense’ – and I was only there for three days, four days, something like that.”

I wanted to bury this bloke Bruce Dickinson and submerge into a band, and the world wouldn’t let me

Dickinson is also reissuing his entire solo catalogue via BMG to coincide with his autobiography’s release, and explains why he wanted the music to be re-presented to audiences again.

“I’m incredibly proud of it,” said Dickinson. “I could pick the flaws in it better than most critics. Because I know what they are, I could go through every bloody song and go, ‘Ah, that was a bit filler, this could have been this, or that’ but I’m equally brutal about my work in Maiden as well. What I wanted to do, I suppose, was give people a chance to have another look at the solo work because there’s great stuff there. Skunkworks [Dickinson’s 1996 solo album],  I love it, because it is the vexatious one where people go, ‘Oh, I don’t like that’ and some go, ‘It’s brilliant!’ It’s great to have music that has people fucking arguing. When I put Skunkworks out, I have to say, I was feeling sorry for myself and a bit depressed. It was very much the idea that I wanted to bury this bloke Bruce Dickinson and submerge into a band, and the world wouldn’t let me do that because they went ‘You can’t do that! You’re that bloke out of Iron Maiden – you’re Bruce! You can’t get rid of yourself!’”

Dickinson also revealed why he is always involved in so many projects at any given time, comparing the similarity of creative process between songwriting and business ventures.

“I’m a creative addict,” Dickinson told Music Week. “The idea of putting two or three disparate groups of people together and creating something interesting, or just creating an enterprise or something that works and perhaps does it in an innovative way. In that sense, coming up with business ideas is very similar to writing songs: you look for a good hook, then you look to put the process around the hook. Sometimes you don’t even figure out what the idea is about until you’re halfway through writing the song – then you go, ‘Oh, I know what this song’s about!’ It’s the same as creating a business idea, you sometimes start off going down one track and then suddenly, halfway along, you learn some bits of information and go, ‘I know what this is – it’s that!’ You come up with a better idea than your original idea, which might have been quite a boring, prosaic, nuts and bolts idea. All the while you’re thinking, ‘This is kind of boring this idea, what would really make this pop?’”