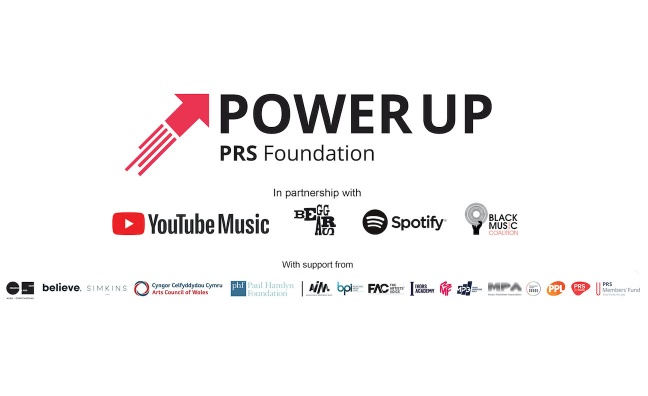 Power Up has unveiled the music creators, industry professionals and executives who will make up year two of the participant programme.

Co-founded by PRS Foundation and Ben Wynter, Power Up’s participant programme elevates Black talent and is a key feature of the long-term initiative launched to address anti-Black racism and racial disparities in the music sector.

With 431 applications from 304 music creators and 127 industry professionals, Power Up has now received close to 1,000 applications since it was launched in February 2021.

The programme includes grant support of up to £15,000 alongside capacity building masterclasses, mentoring, coaching, mental health and wellbeing support, and access to support from partners and the peer network. So far, over £10 million of grant support has been requested.

Year 2 Power Up participants are as follows:

Selected Participants work across a broad range of genres and in different roles and sectors of music. With the inclusion of the Year 2 cohort, the Power Up participant network is now 80-strong.

New roles and appointments for Participants included: Ree Sewell being appointed A&R coordinator at Universal; Daniel Kidane being elected to the Ivors Academy Senate; and Despa Robinson being appointed to the AIM Board (as well as being featured in Risky Roadz’s 0121 documentary for Amazon Prime).

Artist KG became a full-time Capital Dance radio presenter and has had coverage in Complex, Mixmag and Clash. Kwame Daniels presented his own Inna Rhythm series on BBC Radio Ulster, whilst drummer, creator and participant MckNasty recently took up the role of musical director for Wizkid’s sold out London residency at the O2.

Furthermore, Errol Anderson finished a debut project curating events for Frieze Week; Christina Osazuwa expanded her Measure of Music conference (supported by Power Up) and was announced as UK director at Shesaid.so; and Loretta Andrew’s book Talking to Children About Race (co-authored with Ruth Hill) was published in April. Glasgow based DJ and producer Taahliah has received critical acclaim for debut album Angelica, while UTA agent and Daju founder Hannah Shogbola curated a stage at the Dubai Expo, where significant acts included a fellow Power Up participant, and she put on events at Abbey Road and the Roundhouse.

Year 1 participants Nova Twins said: “This platform is so important… Power Up is the holy grail guide to help those who are less advanced and lack support. You can often feel isolated within the industry so having access to a community that you can share experiences within is so valuable.”

Selina Wedderburn said: “Power Up is an amazing initiative that has really helped to support me to achieve my career goals. Being a part of such a powerful network has been great and I am excited to see this network grow further over the years.”

Senior Power Up manager, Yaw Owusu, said: "We are already seeing how the members of our Year 1 programme have powered themselves up and are consistently making impactful waves in the UK music industry and beyond. With that energy and experience behind us we are ready and excited to start working with and supporting the new Power Up cohort in their creative and career endeavours and ambitions. The 40 members all represent such a wide range of skills, sounds and experience and have so much to offer. I can not wait to see what will be achieved this year and going forward. I am also looking forward to having them all connect with our Year 1 participants - strengthening the network even more.”

Organisers stressed the importance of the programme.

“Power Up Partners recognise the huge efforts being made across the music sector since Black Out Tuesday in 2020, and celebrate the great steps announced recently,” said a statement. “But with almost 1,000 Black applicants outlining their experiences of anti-Black racism in many forms and in all sectors and genres of the UK music industry, it is clear more needs to be done to urgently move beyond solidarity and into tangible actions.

“Forty Year 1 participants are being empowered to progress in their careers and partners are proud of their achievements so far. But it is clear from Year 2 applicants that Black people within the UK music industry still face significant racial barriers. There are clear signs that Power Up applicants are exhausted, and many are not receiving the mental health and wellbeing support needed after facing additional trauma and gaslighting following Black Out Tuesday.”

Ben Wynter, co-founder of Power Up, said: “My vision for Power Up was to prove that when Black talent is given the opportunity to thrive it will always do so. By removing the barriers and the glass ceilings that existed for the 40 participants on the programme, they have gone on to achieve great things and have shown the wider industry that when Black talent is given the opportunity, they will not only succeed but will soar. To see our Year 1 participants winning awards, entering boardrooms and achieving some of the highest industry accolades is proof that Power Up does make the difference and is vindication for those that wanted to see it fail or did not recognise the need for such an initiative to exist.

“With the Year 2 cohort joining the programme the key element of my vision is now beginning to come to fruition - creating a strong network of Black talent within the UK music industry that could rely on each other to support, grow and push each other to achieve greatness. Year 1 participants have demonstrated this by helping to elevate each other to success, and with 40 more participants joining the network, I expect to see even more progress made in the coming 12 months.

“This success would not be possible without the hard work of those involved behind the scenes and the partners that supported Power Up with their engagement and financial contributions and I thank them for that. I hope that having seen the success of Year 1and the need for such an initiative (having received around 1,000 applications) we can secure more support from across the wider industry.

“Whilst the success of Year 1 is something I am immensely proud of, it is important to recognise that there is still much work to be done. We are seeing clear anti-Black racism through systemic structures and behaviours. As such it is important to work with partners and other companies and organisations to ensure that the promises made on Black Out Tuesday are upheld and that there is accountability and action when anti-Black behaviour is exhibited. And as such Year 2 will see us activate the Power Up movement which will ensure that anti-Black behaviour is called out and acted upon.”

Joe Frankland, CEO of PRS Foundation and co-founder of Power Up, said: “We knew that targeted support for Black creators and professionals would help to move the dial but it’s safe to say we are blown away by the individual and collective achievements of the Power Up network one year in. Thanks to an ever-evolving list of supporters, partners and passionate individuals, we have built an award-winning initiative which is moving the dial. I want to thank Arts Council of Wales and Paul Hamlyn Foundation whose support enables us to implement bespoke approaches in Wales and to grow the impact of the wider Power Up Movement, including being able to share key learnings across the sector.

“It has been shocking hearing about the experiences of many participants and the barriers facing the majority of applicants, and we are determined to challenge, collaborate and push the industry to do better. I am constantly inspired by the achievements and approach of those in our network and know that with more key players working with us to tackle anti-Black racism with a greater sense of urgency and purpose, we will shape a fairer music industry which benefits us all.”

Sheniece Charway, artist relations manager, YouTube and YouTube Music, said: “When we initially came on board as Power Up partners, we knew we were becoming part of something incredibly important for the industry. Today the results speak for themselves and the programme is living up to its name, helping an 80-strong network of artists and execs truly power up. This is just the beginning - there is lots more work to be done and we are hugely proud to continue in supporting the next generation of Black talent in the industry."

Paul Redding, CEO, Beggars Group, said: “The first year results say it all – Power Up has been transformational for the first cohort of participants, building towards a long-term movement for change. However, there is still a long way to go and judging by the number of applicants for year two, this is only the beginning. Power Up has proven to be effective and to continue its excellent work, needs the support from the whole industry.”

Tom Connaughton, managing director, Spotify UK and Ireland, said: “You only have to look at Year 1's successes to understand the power and importance of a programme like this. We need a collective effort to bring about meaningful and lasting changes in the UK music industry and Power Up is an important step. Our industry needs to be for everyone: the more voices we represent and amplify, the more we can all come together and contribute in order to offer brilliant music for the benefit of artists and fans everywhere."

Sheryl Nwosu, lawyer and chair of the Black Music Coalition, said: "I'm so excited to watch the growth and journeys of the Year 2 cohort of Power Up participants as I have been blown away by the successes of the Year 1 participants! Black talent is here in abundance and Power Up amongst everything else it is achieving is also shining a really bright light on that talent lest there still be those in the industry who continue to subscribe to the idea that such Black talent is in any way hard to come by."

The first 12 months of Power Up’s impactful work was recently recognised by the newly launched Changemaker Award from IMPALA.