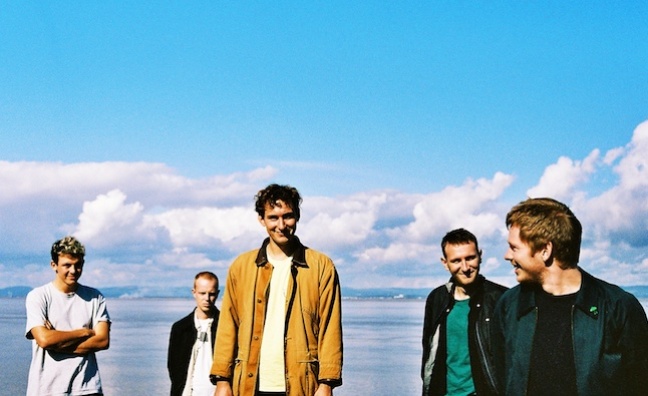 Squid are heading for the Top 5 with their debut album Bright Green Field, according to Midweek sales updates.

The experimental indie band have built up a big following with singles and EPs over the last 18 months.

After generating plenty of buzz among tastemakers, Squid signed to Warp last year. While the iconic label is best known for electronic artists such as Aphex Twin and Squarepusher, the indie also has a track record of breaking bands, including Maximo Park, Grizzly Bear and Battles.

“The reason that we chose them and they chose us was just because of the way we always let our artists have a big creative input,” said Warp’s head of campaigns Leah Ellis. “We want to create a community around them.

“There’s a lot of free rein on the creativity. Their personalities sit really well alongside our artists, you can hear a lot of Warp influences.”

The band built up their following with singles including 2019’s Houseplants (Practise Music/AWAL), which is heading for three million Spotify streams. However, their debut is comprised of entirely original material. It was produced by Dan Carey (Fontaines DC, Goat Girl, Black Midi), who released Squid’s early singles on his Speedy Wunderground label.

As well as making the BBC Sound of 2020 longlist, Squid have enjoyed strong radio support from BBC Radio 6 Music.

“Steve Lamacq at 6 Music has supported them from day one,” said Ellis. “I hope that people who listen to Steve and 6 Music really get the music.”

“The album Squid have made is beyond our expectations from when we joined their journey a few years ago,” said Hoof Management’s Sinead Mills, who manages the band alongside Ina Tatarko and Tash Cutts. “We believe they’ve made a really important record, which their fans are going to love. Warp have been incredibly supportive and have allowed Squid’s vision to be completely realised, which is quite remarkable for a debut album. No one is playing it safe.”

While indie retail and vinyl will be a key element of the debut LP campaign, Leah Ellis said they can also make an impact on DSPs.

“Because they’re so genre-less, Squid are one of those bands that can sit across different formats,” she said. “In the past year since we signed them, they’ve added a lot more followers on streaming.

“We’ve had some good playlists for Narrator. We’re working closely with Spotify and Apple. The beauty with Squid is that they appeal to different tastes and to different people.”

Plans for a worldwide tour were put on hold because of the pandemic. But with live music set to return in the second half of the year, there are hopes that Squid can build momentum for their debut album campaign.

“Pre-pandemic, Squid proved themselves to be one of the most incendiary new live acts from the UK,” said Sarah Joy, the band’s agent at ATC Live. “Their show is enough to render you speechless.

“We had a full calendar in 2020-2021 throughout Europe and Asia, which we are in the process of rebooking due to Covid-19. When live shows resume safely, they will continue to tour their debut and visit new territories worldwide where there is a huge demand for them.

“They have all the hallmarks of a long touring career as well as the creativity and drive to make each show as mind-blowing as the last.”

Extensive UK and European touring is lined up for later in the year, including a date at Printworks London on September 23.

“It’s going to be a really good opportunity for them to get back on the road, because I know they have definitely missed that,” Ellis told Music Week. “They are such an amazing live band.”