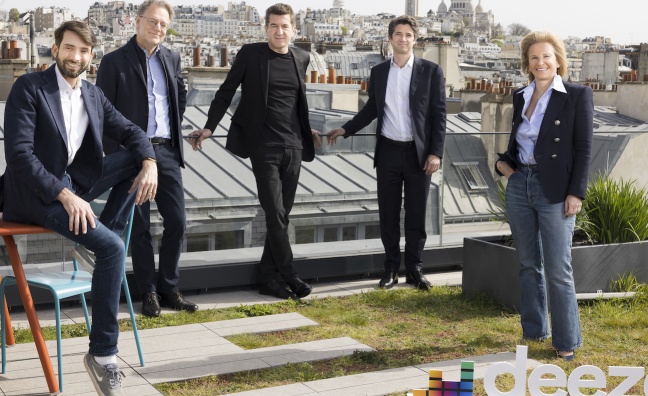 Deezer has confirmed its IPO plans.

The Paris-based global streaming company will be listed on the Euronext Paris stock exchange.

Deezer has teamed up with I2PO, a SPAC (Special Purpose Acquisition Company), to launch the IPO.

Although it has a considerable global footprint, Deezer is some way behind streaming giants Spotify, Apple Music and Amazon Music.

Deezer revealed that it has 9.6 million subscribers and generated revenue of €400 million in 2021. That compares to €9.7 billion of revenue for Spotify in 2021 and 180m subscribers.

Deezer and I2PO will look to persuade investors of the opportunity for the French streaming service, at a time when Goldman Sachs’ influential Music In The Air report is forecasting a growing global market over the next decade.

The IPO will see Deezer valued at around €1.075bn.

“The combination with I2PO will be a catalyst for Deezer’s next stage of growth, with the ambition to achieve €1 billion revenue by 2025, and a clear path to operating profitability and positive cash-flow,” said a statement.

The combined company will benefit from funds held in an IPO account and via a PIPE (Private Investment in Public Equity) to the value of €135m to date, which will help support the growth strategy.

The PIPE subscribers include most of the existing shareholders of Deezer including Access Industries, UMG, Warner Music, Orange, Kingdom Holdings, Eurazeo and Xavier Niel, as well as a selected group of long-term French and international investors including Groupe Artémis, Bpifrance and Media Participations.

Access Industries took a controlling share of Deezer in 2016, following a u-turn on a proposed IPO the previous year.

Deezer intends to focus on “large attractive markets” through its partnership-first strategy, as well as product innovation and brand differentiation.

I2PO’s international network includes media and entertainment companies in the key target countries for Deezer, including the US, UK, France, Germany, Canada, Italy and Spain.

“Once merged into I2PO, Deezer will gain significant visibility in Europe and globally,” added the statement.

'The future is unwritten’ said Joe Strummer. With Deezer, we’re going to write together the future of music streaming

Iris Knobloch, chairwoman of the board of directors and CEO of I2PO, said: “With its well-established brand, first-class management team and scalable platform, Deezer is poised to continue to capture a significant share in the booming music streaming growth. This is a perfect match and a transformational deal that will deliver long-term value creation for our shareholders as Deezer is a unique asset with considerable strategic avenues for future growth.

“With Deezer’s hybrid B2B/B2C strategy to enter key international markets, its highly competitive technology and focus on ESG [Environmental, Social & Governance], we are confident that the company is well-positioned to disrupt and consolidate while providing a high-quality music streaming service to millions of users around the world.”

Francois-Henri Pinault, co-founder and Member of the board of I2PO, said: “We launched the first European SPAC dedicated to entertainment and leisure with the ambition to take a European champion to new heights. In Deezer, we have found the ideal combination. I2PO brings an extensive international network and a complementary skill set to help develop Deezer as the leading independent music streaming platform through strong positions in selected key markets. We are excited to accompany one of the emblematic European tech leaders in its next chapter as a public company listed in Paris.”

Matthieu Pigasse, co-founder and member of the board of I2PO, added: “Music is life. It is the only universal language. Where words fail, music speaks. As a longtime investor in the media and entertainment world and a customer of Deezer, I know first-hand that Deezer is the home of music, with the best experience possible and a unique potential. ‘The future is unwritten’ said Joe Strummer. With Deezer, we’re going to write together the future of music streaming, with a great team, fantastic tech capabilities, a differentiated business platform and an ability to scale.”

Guillaume d’Hauteville, chairman of Deezer, said: “Deezer has been accelerating its momentum substantially over the past months, reaching again double-digit growth in February. With the imminent launch of the RTL+ partnership in Germany, among other developments, the future of Deezer is brighter than ever. We chose to go public via a merger with I2PO as this route allowed us to review our future business plans and opportunities with an excellent team, increase our financial means, keep our strategic potential, and provide liquidity to our current and future shareholders. I would also like to thank all Deezer employees, its management team and historical shareholders led by Access Industries, for having allowed the company to become what it is today and for continuing to do so with further investments as part of this transaction.

“In addition, today’s transaction is another landmark for Access Industries as we like to help our music and digital investments, such as Deezer, Spotify, Beats, Warner Music or DAZN, to name a few, grow and become references in their respective markets.”

Jeronimo Folgueira, CEO of Deezer, added: “Today marks an important milestone in Deezer’s history as we embark on a journey to become a publicly traded company on Euronext Paris. I am thrilled to partner with I2PO who will provide us with the expertise, the global network and the capital we need to execute our strategic plan. We are uniquely positioned in the growing music streaming industry, with a very competitive product, a clear strategy and an experienced and renewed management team to seize this opportunity and create substantial shareholder value.”