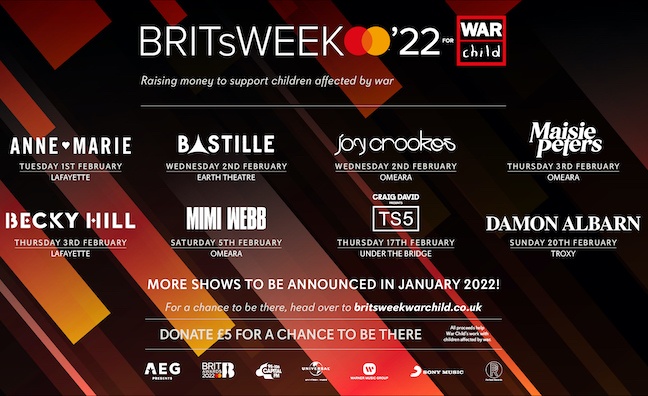 BRITS Week presented by Mastercard for War Child will be returning in 2022 with another series of concerts in venues across London.

BRITS Week will be produced by AEG Presents, BPI, and War Child. The event series is also sponsored for the first time by Mastercard, headline sponsor of The BRIT Awards.

Proceeds from the show will be donated to War Child to aid them in the work they do to support children in conflict zones, as well aiding them in their recovery.

Performances will be taking place between February 1 and 20 around The BRIT Awards 2022 with Mastercard.

Craig David's TS5 show will take place at Under The Bridge on February 17.

Closing BRITS Week at the Troxy is Damon Albarn, who will be performing tracks from his new album The Nearer The Mountain, More Pure The Stream Flows.

“We are delighted to be working with BPI and AEG once again on another BRITs Week series,” said Ben Anderson, head of live at War Child. “Whilst there was a temporary pause on all things live music over the past 12 months or so, there was no pause to the challenges facing children who live in conflict zones around the world. With conflict rates on the rise, and more children at risk, our work as a charity is never more needed. The whole music team and the wider War Child teams are very excited to be working on a fantastic series of gigs. There are some real treats for fans to see their favourite artists in some venues across the capital that they wouldn't normally play, and we look forward to not only the gigs but also to raising much needed funds and awareness of the fantastic work that War Child do.”

Geoff Taylor, chief executive of BPI & BRIT Awards, said: “BRITs Week shows our industry at its collaborative best, and it’s fantastic to have it back as a key part of the build-up to next year’s BRIT Awards. The event shines a light on brilliant new talent while also celebrating our established stars in great live settings that give fans a truly memorable experience – and in the process raise funds for the vital work of War Child.  Our profound thanks, as ever, to our close partners on this – Mastercard, AEG and War Child – and of course to all the participating artists and their labels for their generous support.”

Simon Jones, senior vice president of international touring, AEG Presents, said: “After the disappointment of 2021 not being able to happen, it’s great to have BRITs Week back and to welcome Mastercard as our new headline partner for 2022. Mastercard have been very much front and centre with the BRIT Awards for many years, and this was a natural expansion of their relationship with the BRITs. We’re so pleased with the incredible calibre of acts that have agreed to be part of the series for 2022. It highlights the amazing new and established talent this country has to offer, plus it gives fans the opportunity to see some incredible acts in small rooms, in the process raising hundreds of thousands of pounds for children in conflict with War Child."