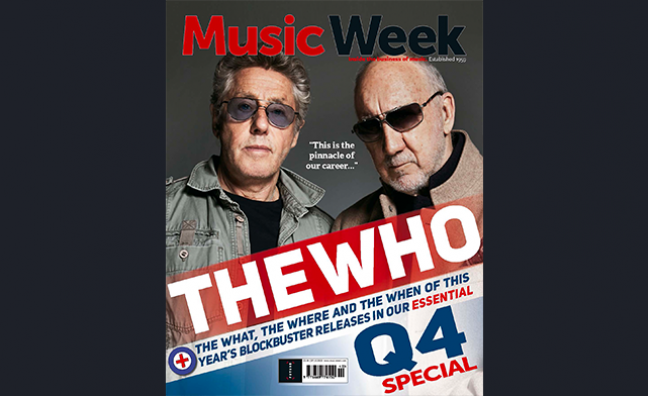 The new edition of Music Week celebrates the start of Q4 over 92 action packed pages.

We kick off with The Who, as Roger Daltrey and Pete Townshend star on the cover ahead of their first band album in 13 years, Who. The album is set to be one of the biggest of music’s busiest period, with Polydor set to launch a blockbuster campaign.

We join Daltrey and Townshend on the road in Texas to discover the secrets behind their new record and find out where the legendary pair fit into the modern music industry. Plus, we hear all about the upcoming campaign from Polydor co-president Tom March and the band’s management team.

That tees up a mammoth run-down of the releases to look forward to throughout the quarter from across the major and independent sectors. Everything you need to know about music's biggest quarter is here.

Fittingly, October 12 sees the second annual National Album Day, and we celebrate with a tribute to the long-player from Elbow leader Guy Garvey, whose band are ambassadors for 2019 alongside Mark Ronson, Lewis Capaldi and Mahalia.

This week’s Big Story examines how streaming bucked the trend in Q3, while the news section features Parlophone’s plans to take on the world with Tones & I and the facts behind D-Block Europe’s runaway success.

Neil Hannon tells the story behind The Divine Comedy’s smash National Express in Hitmakers, while James Blunt looks back on a storied career in pop in The Aftershow.

We meet Tottenham soul singer Miraa May in On The Radar, introduce Dylan in Making Waves and explore the music behind Sky comedy Brassic in Sync Story.