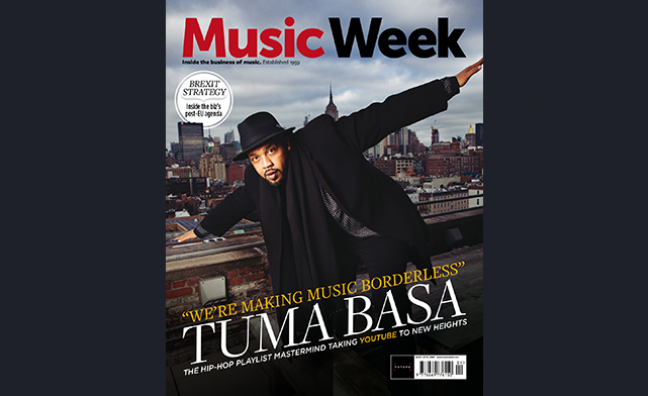 The new edition of Music Week is out now and features a very special cover star in the form of YouTube's director of urban music Tuma Basa.

Interviewed in New York, Basa opens up on his time spent revolutionising playlisting with RapCaviar at Spotify and talks artist relationships, hip-hop and his insatiable appetite for success.

As the dust settles on the 2010s, we crunch all the numbers and analyse the market shares from a decade that turned the record industry on its head.

Elsewhere, we switch to the Netherlands for a one-to-one with Spinnin’ Records CEO and co-founder Roger da Graaf to mark 20 years of the Warner-owned dance label.

In this week's Hitmakers we go back to the 1960s with Dave Clark of The Dave Clark 5, who revisits the band's sports anthem Glad All Over, while The Police drummer Stewart Copeland shares some priceless stories in The Aftershow.

With just days to go until Brexit, our Big Story sees the music industry call for clarity from culture minister Nigel Adams on the key issues facing the sector.